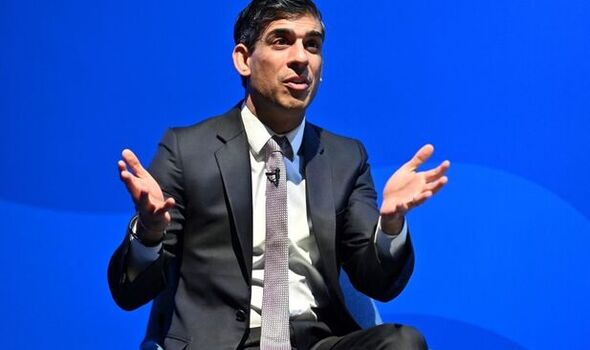 Ahead of the Chancellor’s Spring Statement tomorrow, they warned that the Treasury “must do more” for the elderly struggling with soaring energy bills – and called for “targeted support” for the lowest-income pensioners.

The Resolution Foundation think tank on living standards went further, urging Mr Sunak to put up the state pension and other benefits by five per cent – and to consider excluding low earners from next month’s 1.25 percent National Insurance increase.

Mr Sunak is expected to offer some assistance, to ease the impact of surging fuel bills, following warnings from the Bank of England that inflation could soar to eight per cent this year.

Many MPs are hoping that he will wipe at least 5p a litre off fuel duty to help hard-pressed motorists.

Caroline Abrahams, charity director at Age UK, said the Chancellor should note that older citizens will be among those hardest-hit by rocketing prices.

She said: “The cost-of-living crisis is hitting pensioners very hard, with millions growing increasingly anxious and feeling forced to cut back on essentials such as heating and food.”

Ms Abrahams declared: “The support announced by the Chancellor last month is simply not enough to protect our older population from the unprecedented escalation in their energy bills.

“Since the Chancellor paused the triple-lock guarantee to the state pension, the cost of living has soared.

“And next month’s planned 3.1 percent increase seems a drop in the ocean compared to the sharp rise in energy prices.”

She added: “It is far from clear how the Chancellor expects the poorest older people – with no other source of income besides their state pension and benefits – to cover their extra costs.”

“With analysts estimating that average energy bills could rise to over £3,000 a year, we are calling on the Chancellor to set out further targeted support for lower-income households in his Spring Statement.

“These are hugely worrying times, and the Government must do more to mitigate the risks for vulnerable older people.

“Measures should include introducing direct payments of up to £500 to all those who are eligible for the Cold Weather Payment – and doubling the Discretionary Fund to £288million to enable more people to claim the council tax rebate.”

A report from the Resolution Foundation yesterday said that next month’s 3.1 per cent pension rise will see the “real value of social security falling significantly in the months ahead.

“This harmful real-income rollercoaster for poorer households and pensioners could be addressed without lasting fiscal impacts by increasing benefits by more this year, and less next year.”

Adam Corlett, the think tank’s principal economist, warned that “rapidly rising inflation is on course to bring about the biggest income squeeze families across the UK have faced since the 1970s.

“While fuel duty cuts to relieve pressure at the petrol pump will inevitably be part of the package announced this week, the main income support will need to come from either the tax or benefits systems.”

Mr Corlett added: “Low-to-middle income households will be hardest hit by the cost-of-living squeeze, especially when the energy price cap rises – and should therefore be the priority for support.

“Raising benefits by a further five percentage points would deliver four times as much for these families as cancelling the National Insurance rise, and should be the Chancellor’s top policy priority.

“But if Rishi Sunak is keen to demonstrate his tax-cutting credentials alongside raising benefits, then raising the National Insurance threshold too would be the best route, as it is well-targeted at middle-income households.” Treasury officials declined to comment on the Chancellor of the Exchequer’s plans for tomorrow’s Spring Statement.

Meanwhile, Work and Pensions Secretary Therese Coffey told MPs that a major effort was under way in Whitehall to find ways of easing the cost-of-living squeeze.

She said: “There’s a cross-Government effort going on about trying to tackle the cost of living.

“And that’s been ongoing for some time, most recently revealed by what the Chancellor announced in terms of council tax rebates. There is a phasing of energy bills that is there.”

But Ms Coffey was caught up in a row last night when Labour accused her of failing to confirm categorically that the triple lock mechanism for uprating the state pension will be reinstated next year.

Labour’s shadow work and pensions secretary Jonathan Ashworth asked in the Commons: “Can she rule out breaking the triple lock again this year?”

Tory frontbencher Ms Coffey replied: “As was explained at the time, the increase in earnings was due to a statistical anomaly due to the impact of Covid.

“That is why the Opposition supported the Bill right through the House until it came back from the Lords.”

She added: “So there was a lot of support at the time recognising that statistical anomaly at that moment.”

Boris Johnson’s spokesman insisted that the Government remained committed to the Prime Minister’s earlier promise that the suspension of the triple-lock mechanism was for one year only.

He continued: “We’ve maintained that it was a temporary pause. I can’t, and no one can, predict what inflationary pressures there will be.

“But certainly there’s no change to the commitment.”