The exclusive poll by Techne UK for Express.co.uk has put Mr Sunak, the former Chancellor, nine points ahead of his nearest rivals Foreign Secretary Liz Truss and trade minister Penny Mordaunt among the general public with 20 percent to their 11 percent. The findings come despite a vicious briefing campaign against the former Chancellor by his rivals in the leadership contest which kicked off last Friday and civil war breaking out among Brexiteers over who to back.

The result of the poll came out just an hour after the powerful European Research Group (ERG) of Tory Brexiteer MPs decided to split their votes between Attorney General Suellla Braverman and Foreign Secretary Liz Truss.

It also broke as Ms Mordaunt was launching her campaign to be leader with her vying alongside Ms Truss to be the one to take on Mr Sunak in the final run off.

But Mr Sunak came top with all voters and people who voted Conservative in 2019 and 2022.

According to the poll of 1,624 people taken on July 12 he came top of the general vote with 20 percent, ahead of Ms Mordaunt and Ms Truss both on 11 percent.

And from 2019 Conservative voters he had 44 percent compared to Ms Truss’s 9 percent and Ms Mordaunt leapfrogging her into second place with 16 percent. 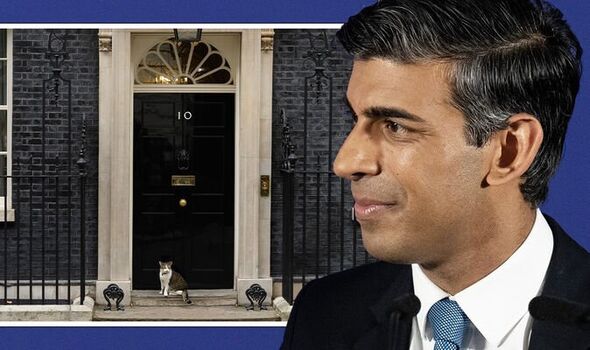 However, in a concerning finding for the Tories, almost half (44 percent) of those polled did not seem to have been won over by any of the options.

But there was also a strong expectation that Mr Sunak will be declared the winner on 6 September from 33 percent of all voters, 38 percent of 2022 Conservative voters and 44 percent of 2019 Tory voters.

The poll has been welcomed by Mr Suak’s camp after a torid few days of briefing against him.

Opponents have tried to suggest he was not a real Brexiteer when he backed Leave in 2016, have claimed that he is working with the toxic former Downing Street chief of staff Dominic Cummings and there were claims he leant Jeremy Hunt votes last night to qualify for the final eight and split the opposition against him.

But Mr Sunak’s supporters said that the poll underlines he is the best to beat Sir Keir Starmer’s Labour.

Source close to Sunak campaign: “All the polling shows that only Rishi can beat Labour, and deliver a historic fifth general election victory for the Conservative party. People trust him and know he’s competent. Every poll shows only Rishi beats Keir Starmer. Only Rishi wins remain and leave voters. And only Rishi wins the North and the South.” 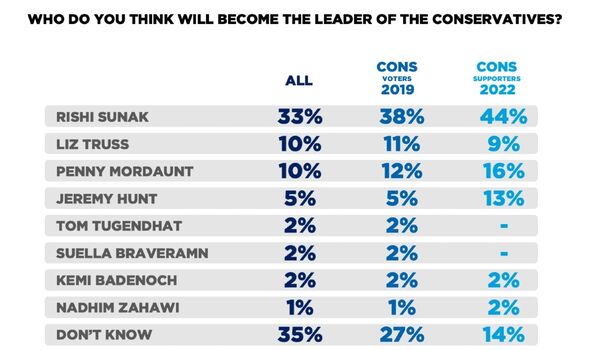 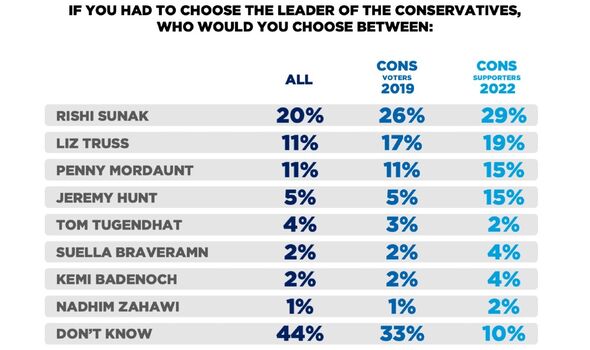