European Commission vice-president Maros Sefcovic said the bloc expects “nothing more, nothing less” than for the terms of the UK’s EU Withdrawal Agreement to be fully implemented before the end of the year. Ahead of a crunch meeting with European ministers, the top eurocrat said: “The EU believes in calm, constructive cooperation through the channels created through the Withdrawal Agreement. “We will not be renegotiating, but we are dedicated to its full and timely implementation – nothing more, nothing less.”

Brussels was infuriated after the legislation’s publication because it paved the way for ministers to overrule EU customs checks and state aid rules in Northern Ireland as part of the deal to avoid a hard border.

The bloc has threatened to walk away from the trade talks with Britain unless the Prime Minister scraps or amends the Bill by the end of the month. 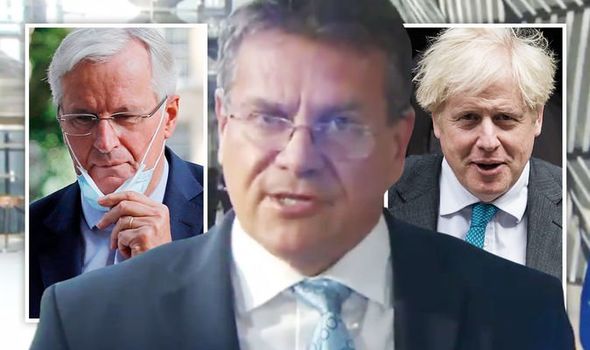 But Michel Barnier, the EU’s chief Brexit negotiator, is expected to continue wrangling over a free-trade agreement with his British counterpart Lord Frost despite the warning.

Top eurocrats are also pondering plans to haul Mr Johnson in front of the European Court of Justice unless he drops his Brexit plans.

This could see Britain hit with lump sum fines or trade and agriculture sanctions, according to advice issued by EU lawyers.

Michael Roth, Germany’s European affairs minister, said: “We are really really disappointed about the results of the negotiations so far.

“The so-called Internal Market Bill is extremely worries us because it violates the guiding principles of the Withdrawal Agreement and that’s totally unacceptable for us.

“Today two signals are key; first a strong support of our chief negotiator Michel Barnier and his team and we will reaffirm our strong commitment for a fair deal based on trust and confidence between the EU and the UK.

“But please dear friends in London stop the games time is running out what we really need is a fair basis for further negotiations and we are ready for that.”

France’s European affairs minister Clement Beaune insisted EU negotiators could use the scrap as “leverage” in future rounds of talks.

He said: “For the moment, we are right to continue the discussions and we will see what happens in the next few months. I think we have to continue to negotiate.

“I am excluding nothing for the moment. We will see the parliamentary and political context in the UK in the coming weeks.

“Europe has some leverage. And not just the Withdrawal Agreement’s own internal mechanisms but also, the fact that during the time that we negotiate we will be excluding no options.

“And if at the end of the year, if we have an agreement on the future relation, and we are ready to ratify it at the European and national levels, but the Withdrawal Agreement has been called into question…well, obviously, we cannot go forward.”