Speaking on a panel with fellow contenders, Lisa Nandy and Rebecca Long-Bailey, Sir Keir could not rule out the possibility of rejoining the trade bloc in the distant future. Last week, the EU and UK concluded the first round of negotiations although Michel Barnier declared on Thursday the two sides had multiple areas of “divergence”. Chiefly, according to Mr Barnier, the two sides still remain at odds over the issue of fisheries, fair and equal competition, criminal justice and the eventual dispute settlement.

Although he said the areas of differences remained, he expressed his opinion a deal could be reached, although it would be difficult.

He said: “To be completely frank with you, there are many divergences and they are very serious divergences.

“Which is probably quite natural after the first round of negotiations.

“Our differences come as no surprise, especially after only one round of negotiations, but some are very, very difficult.

“However, I continue to believe that we can reach a good agreement for both sides.” 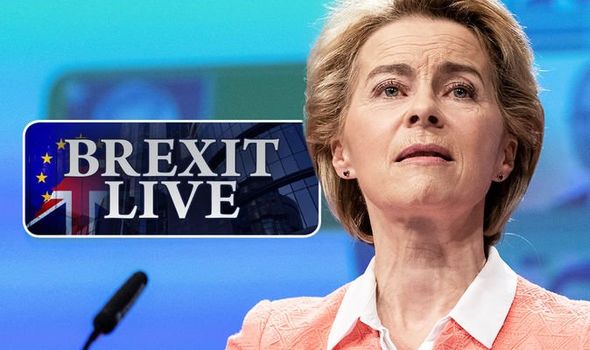 8.12am update: Brexit negotiations at risk

With the cases of coronavirus continuing to increase, policy editor for BBC Newsnight, Lewis Goodall has insisted the “chances of an extension request by July has to be rising”.

Boris Johnson has stated he will not request an extension to the Brexit transition which finished on December 31, 2020.

As it stands, the deadline for extending the transition period is the end of July, Lewis claimed an extension could be possible due to “public concern”.

He said: “They will be acutely aware that public concern over virus much greater than its concern over the extension of a transition period about which they’re only vaguely aware.

“If the crisis approaches the severity of migration crisis plus crash for the EU, they will be clamouring for an extension as well. Both sides will run out of bandwidth or capacity to absorb further supply shocks.”

Only crucial meetings will be held by the EU council this week amid fears of the coronavirus outbreak.

In health advice circulated to Brussels officials, delegated had been advised to “respect personal hygiene” and to “avoid handshakes and kisses” during meetings this week.

7.45am update: Keir Starmer refuses to rule out rejoining the EU

Speaking at the Labour leadership hustings on Sunday, Sir Keir insisted the issue was not for the “immediate future”.

He added: “I don’t think it’s a priority for now and the immediate future,” but when asked to explicitly rule it out he refused to do so.

When questioned on his stance, he said it was for “our kids to decide what our future relationship is”.