Boris Johnson held talks with Brussels chiefs Ursula von der Leyen and Charles Michael today as the European Union finally acknowledge the Uk’s rejection of an extension to the transition period. Brexit talks have entered the fourth rounds of negotiations but have so far made little progress. However, the UK and European Union have now agreed “new momentum” is required is the countdown to end of the current transition period continues.

Speaking today, the Prime Minister and Brussels chiefs agreed on work aimed at “swiftly” concluding a deal by the end of the year, including the possibility of “finding an early understanding on the principles underlying any agreement”.

However, there are still sticking points between both sides and talks are expected to be under intense scrutiny.

The UK still wants to strike an “ambitious” free trade agreement (FTA), and Boris Johnson is expected to make it clear to Brussels bosses that Britain is ready to start trading on World Trade Organisation rules from January 1 if a deal cannot be reached.

“The high-level meeting was always envisaged as a moment to push the negotiations forward. We now need to get this resolved and deliver certainty for businesses at home and in the EU as soon as possible.

“We are looking to agree a high quality FTA based on the agreements the EU has already reached with other countries, but whatever happens we will be ready for January 1 when we will take back control of our laws, border and money.” 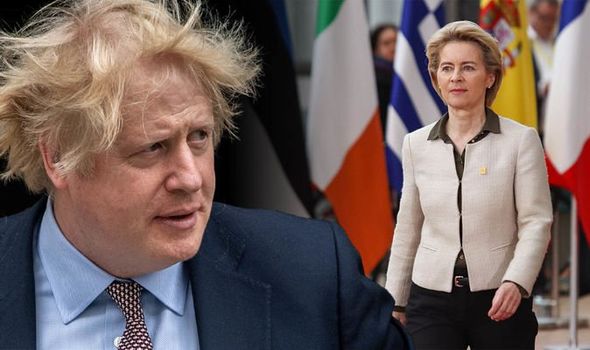 However, it seems the EU is preparing itself for a no-deal exit.

French former Europe minister Nathalie Loiseau told BBC Radio 4’s Today programme: “We are ready either for an agreement or for a no-deal and we are getting prepared more actively for a no-deal considering the circumstances.

“We believe it is possible to have an agreement – it has to be ready in October so that parliaments on both sides can ratify it.

“We believe it is possible because we have the political declaration which we negotiated together, signed together and should respect together – so, yes, the framework is here.”

It is thought today’s talks will be followed by a series of weekly talks at the official level for five weeks, commencing on June 29, looking at detailed technical issues and trying to smooth over the divide between the sides.

“The Parties noted the UK’s decision not to request any extension to the transition period.

“The transition period will therefore end on 31 December 2020, in line with the provisions of the Withdrawal Agreement.

“The Parties welcomed the constructive discussions on the future relationship that had taken place under the leadership of Chief Negotiators David Frost and Michel Barnier, allowing both sides to clarify and further understand positions.

“They noted that four rounds had been completed and texts exchanged despite the challenges presented by the COVID-19 pandemic.

“The Parties agreed nevertheless that new momentum was required.

“They supported the plans agreed by Chief Negotiators to intensify the talks in July and to create the most conducive conditions for concluding and ratifying a deal before the end of 2020.

“This should include, if possible, finding an early understanding on the principles underlying any agreement.

“The Parties underlined their intention to work hard to deliver a relationship, which would work in the interests of the citizens of the Union and of the United Kingdom.

“They also confirmed their commitment to the full and timely implementation of the Withdrawal Agreement.”