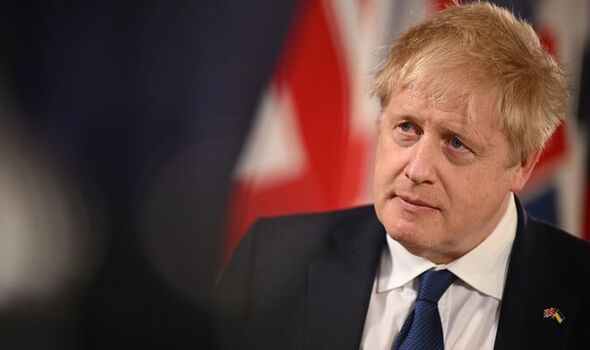 The Prime Minister’s upbeat tone came as figures showed economic growth speeded up in January as the impact of Omicron was erased. Gross domestic product (GDP) increased by 0.8 percent over the month, indicating the UK economy is now bigger than it was when the pandemic first struck. And experts have predicted it could grow by 5.5 percent this year.

Mr Johnson said: “I welcome today’s positive GDP stats. Our economy is in a strong position to deal with current challenges.”

January’s remarkable advance, which followed a slight dip the previous month because of increased Covid restrictions, came after experts had predicted just a 0.1 percent rise.

Julian Jessop, from the Institute of Economic Affairs think tank, said that despite surging inflation and the Russian invasion it was “too soon to write off” further economic growth.

He added: “The UK economy started the year with plenty of positive momentum. In an upside scenario, with a quick end to the Ukraine crisis, rapid falls in energy prices and a strong rebound in business investment, GDP could still grow by about 5.5 percent in 2022.” But UK house- holds were facing sharply rising costs before Russia’s military action.

The conflict pushed the price of oil to its highest level for nearly 14 years at one point, with UK fuel hitting record highs. Gas prices have also soared, leading to warnings that average energy bills could hit £3,000 per year in October, after rising to £2,000 in April. Grain prices have also jumped as both Russia and Ukraine are big producers.

Chancellor Rishi Sunak, due to give his Spring Statement on March 23, said: “We have provided unprecedented support throughout the pandemic, which has put our economy in a strong position to deal with current cost-of-living challenges.

“We are continuing to help people where we can, including through over £20billion of support. We know that Russia’s invasion is creating significant economic uncertainty and we will continue to monitor its impact.”