Home » Politics » Biden is not fit for purpose: Nigel Farage blasts US President ‘not up to the job’ 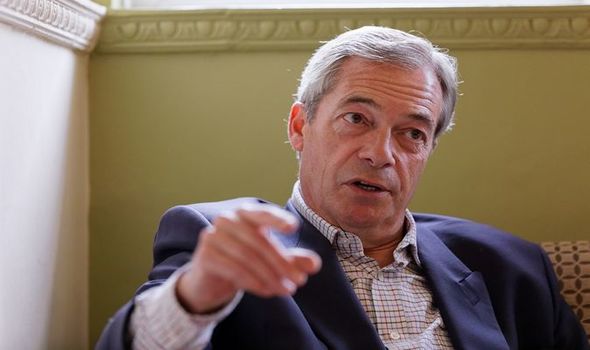 The 57-year-old believes his friend Donald Trump can win both the Republican presidential nomination and the next US election. Speaking of the nomination in an exclusive interview with the Sunday Express, he said: “If Trump wants it, it’s his. My guess it that he does want it. “So, yeah, we’re set for another contest – another go from Trump.” Mr Farage last saw Mr Trump in early May and found him “incredibly fit”.

However, he is sure that President Biden will not be the Democrats’ candidate in 2024. “It won’t be him,” he says. “It can’t be him. They are going to get hammered in the mid-terms whatever happens. The only question is how badly. He’s just not fit for purpose. He’s not up to the job.”

Mr Trump considers Mr Biden an “anti-British president” and argues the UK’s “big problem” on the global stage is the “American relationship”.

Despite this, he is encouraged by the recent defence link-up between the UK, the US and Australia and is in contact with groups across Europe that want their countries to leave the EU.

But he is encouraged that he sees “the needle” moving in France, the Czech Republic, Slovakia, Poland and Hungary, adding: “The overall direction is the one I want to see but we’re not quite there yet.”

Closer to home, Farage in an exclusive interview with the Sunday Express spoke of his respect for how Brexit minister Lord Frost has pushed the EU to offer concessions on the Northern Ireland protocol, he wants much tougher action to stop foreign fleets pillaging fish stocks.

Relishing the prospect of a fight, he says: “Let’s kick the big supertrawlers out and if that provokes international outrage, so be it.”

He claims the “unfinished part of Brexit” is leaving behind the influence of the European Court of Human Rights, arguing that he cannot see “how any deportations policy works” while it continues.

Arguing for a much more interventionist policy to tackle the issue of migrants using small boats to cross the Channel, he says: “Once we start turning the boats around, once we start deporting people who have arrived illegally or who have never qualified as refugees, the boats will stop coming.”