Home » Politics » Biden is in Pennsylvania. Trump is in Washington. Here’s what the candidates are doing today.

As voters headed to the polls on Election Day, Joseph R. Biden Jr. was still campaigning in Pennsylvania, a battleground state that could play a key role in the outcome of the election.

His opponent, President Trump, spoke to Republicans at a party office in Arlington, Va., just miles away from the White House. 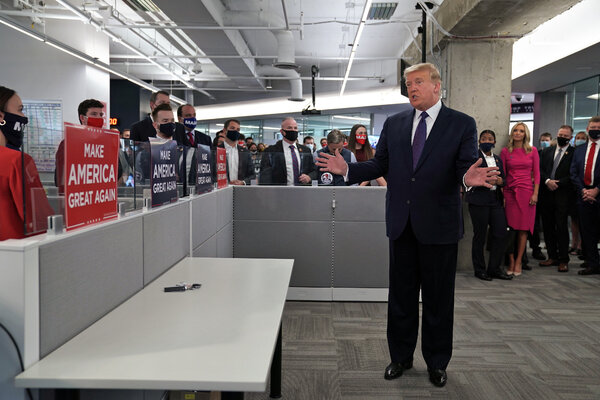 Mr. Biden began the day on a solemn note, attending church in Wilmington, Del., and visiting the cemetery where his first wife, son and daughter are buried, according to a pool report. He then departed for Pennsylvania, where he spoke to supporters outside a union hall in Scranton, the city where he was born, and visited his childhood home. He then traveled to Philadelphia, where he is hoping for significant in-person voter turnout.

This evening, Mr. Biden is scheduled to return to Delaware, his home state, where he will address the nation.

Mr. Trump traveled to the Republican National Committee annex office in Arlington, which also houses his campaign headquarters, around midday. He plans to then return to the White House, with no further public events scheduled. In the evening, he was expected to gather with supporters at the White House.