The former Labour leader suggested Britain should accept EU demands in order to avoid a no deal Brexit. A clearly panicking Mr Miliband said that “no deal is the worst possible outcome” as he declared that Britain “needs a deal”. Marr grilled the MP on whether Labour would accept giving up British fishing waters in order to appease EU negotiators and strike an agreement before the end of the transition period.

The BBC host said: “You know to get a deal Britain would have to give way on its territorial fishing waters. Would you accept that?”

Mr Miliband responded: “Both sides have to compromise, I don’t accept that logic. It’s give and take.

“We have to be tough in relation to fish. We have to get the best deal we possibly can.

“But our fishing fleets rely on selling into the EU markets. It would be a disaster for them to get a no deal. Let’s get a deal.”

JUST IN: It’s NOT about sovereignty!’ Spain’s foreign minister furious at UK 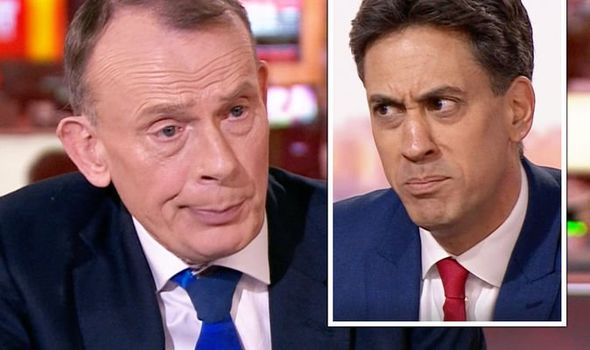 Mr Marr followed up: “Would you accept being tied to the single market in perpetuity in order to get a deal today?”

The senior Labour MP said: “I want us to have high minimum standards on workers rights and the environment. What do we have to fear?”

The BBC host fired back: “You sound as if you would accept the EU demands on the so-called ratchet clauses, that if the UK diverges from the EU there would be fast, punitive tariffs piled onto us. That is the proposal!”