Home » Politics » Barrett, Declining to Detail Legal Views, Says She Will Not Be ‘a Pawn’ of Trump

Judge Amy Coney Barrett flatly refused on Tuesday to pledge that she would recuse herself if a dispute over the Nov. 3 election came before the Supreme Court, insisting that despite her nomination by President Trump, she would not “allow myself to be used as a pawn to decide this election for the American people.”

Over more than nine tense hours of questioning, Judge Barrett evaded Democratic senators’ efforts to pin down her views on the Affordable Care Act, abortion rights, gay marriage and other issues, including a possible election-related case. She played down her history of taking conservative stances in legal writings and personal statements, arguing that she might view issues differently as a sitting justice.

“I have not made any commitments or deals or anything like that,” she told the Senate Judiciary Committee as Democrats took turns challenging her during her second day of confirmation hearings. “I’m not here on a mission to destroy the Affordable Care Act. I’m just here to apply the law and adhere to the rule of law.”

After days of hammering Judge Barrett over the health care law, Democrats dismissed her assurances as essentially meaningless. Mr. Trump did not need to secure any specific promises from Judge Barrett, they argued. He selected her precisely because her honestly held legal views would achieve the end he is after.

“I am left with looking at the tracks of your record and where it leads the American people,” said Senator Amy Klobuchar, Democrat of Minnesota, “and I think it leads us to a place that’s going to have severe repercussions for them.”

Judge Barrett’s refusal to discuss specific cases or commit to recusing from particular matters was in line with a decades-old playbook used by Supreme Court nominees to avoid giving substantive answers during confirmation hearings. But her attempts to deflect such questions were more conspicuous than usual, given how explicit Mr. Trump has been about how he would want his Supreme Court nominees to rule.

The president has stated that he wants Judge Barrett confirmed by Election Day given that he anticipates an election dispute and is “counting” on the court to “look at the ballots.” And he has said he wants justices who would “do the right thing” and invalidate the Affordable Care Act.

“This is what President Trump said. This is what your party platform says: Reverse the Obamacare cases,” said Senator Sheldon Whitehouse, Democrat of Rhode Island, addressing Republican senators. “Why is it surprising for us to be concerned that you want this nominee to do what you want nominees to do?”

Republicans, rushing to secure Judge Barrett’s confirmation before the election, lavished her with praise for her legal qualifications and personal virtues. Senator Lindsey Graham of South Carolina, the judiciary panel’s chairman, called her “one of the most qualified people of your generation,” while Senator John Cornyn of Texas encouraged her to hold up the blank notepad in front of her at the witness table to show that she was speaking entirely without notes.

“That is impressive,” Mr. Cornyn said. 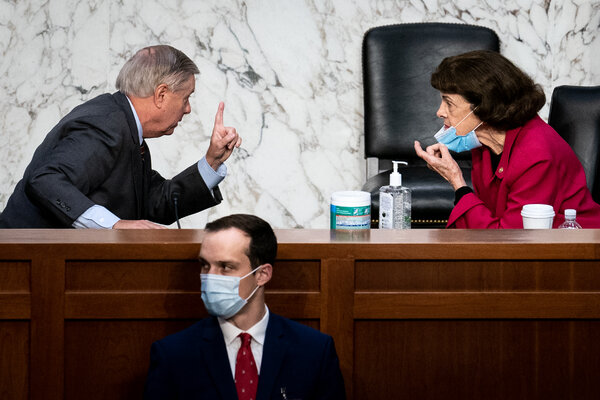 The marathon day of televised questioning offered senators and Americans their first detailed look at Judge Barrett’s conservative legal philosophy, heavily influenced by former Justice Antonin Scalia, and a window into her personal life as a 48-year-old judge and mother of seven children.

Judge Barrett was most eager to discuss her legal philosophy on broad strokes. She expounded at length on the tenets of textualism and originalism, approaches made popular by Justice Scalia that privilege plain reading of legal texts and seek to minimize a judge’s own interpretations of statute or the Constitution.

“Judges cannot just wake up one day and say, ‘I have an agenda — I like guns, I hate guns, I like abortion, I hate abortion,’ and walk in like a royal queen and impose their will on the world,” she said.

But that was more or less as much as she would say about any one issue. Judge Barrett invoked her predecessors — including Justice Ruth Bader Ginsburg, whose seat she is in line to take — in refusing to say how she would rule on all manner of politically potent issues, leaving Democrats exasperated.

Pressed by Senator Chris Coons, Democrat of Delaware, Judge Barrett said she would take the question of recusal on any election-related cases “very seriously,” but pointed to strict guidelines that govern such matters rather than making a commitment in advance. Mr. Coons was far from the first Democrat to raise the issue, and Judge Barrett at one point grew impatient.

“I would certainly hope that all members of this committee would have more confidence in my integrity than to think that I would allow myself to be used as a pawn to decide this election for the American people,” she said.

On the Affordable Care Act, an issue Democrats see as central to their success in next month’s elections, Judge Barrett offered even less insight into her thinking.

At one point, Ms. Klobuchar displayed a 2015 Twitter post by Mr. Trump in which he said as president he would appoint judges who would “do the right thing unlike Bush’s appointee John Roberts on ObamaCare.” The tweet was a reference to Chief Justice John G. Roberts’s opinions that left the health law in place.

“I can’t speak to what the president has said on Twitter,” Judge Barrett said. “He hasn’t said any of that to me.”

Judge Barrett also resisted attempts by Democrats to argue that her own academic writing criticizing Chief Justice Roberts meant she would certainly vote to strike it down in the case currently before the court.

“One of the upsides of being an academic is you can speak for yourself,” she told Ms. Klobuchar. “It’s difficult for me to say how I would have decided that case if I had to go through the whole process of judiciary decision making.”

Besides, she told Senator Dianne Feinstein of California, the panel’s top Democrat, the legal question now before the court — whether the entire law must be struck down because one part of it has been deemed flawed, or whether the flawed part is “severable” from the rest — poses a different question.

Democrats likewise argued that as conservatives promised, Judge Barrett would most likely be a vote to chip away or outright strike down the Roe v. Wade decision establishing abortion rights. The nominee gave them little help, though.

When Ms. Feinstein reminded Judge Barrett that Justice Scalia had famously written that Roe was wrongly decided and should be overturned, Judge Barrett refused to clarify her own views.

Ms. Feinstein was not pleased. “On something that is a major cause with major effects on over half of the population of this country who are women, it is distressing not to get a straight answer,” she said.

Judge Barrett would not budge.

“I have no agenda to try and overrule Casey,” she said, referring to another abortion rights case. “I have an agenda to stick to the rule of law and decide cases as they come.”

Still, she said later that she did not consider Roe “superprecedent,” which she defined as “precedent that is so well established that it would be unthinkable that it would ever be overruled.” Democrats took the answer to mean she would be open to overturning the ruling.

Multiple senators presented Judge Barrett with a 2006 advertisement she had signed in support of overturning Roe v. Wade and its “barbaric legacy.” She said she had signed it quickly in the back of a church when she was a private citizen, but would not do so now as a judge.

“I’m happy to talk about views I’ve expressed when I was a private citizen, but now I’m a judge, so I cannot publicly express views,” she told Senator Richard Blumenthal, Democrat of Connecticut.

In more personal moments, often elicited by Republicans looking to cool the heat, Judge Barrett spoke of a lapsed love of the piano and of rusty French language skills. She implied that mockery of her Catholic faith, her large family and her decision to adopt two of her children from Haiti had been painful.

She said that she and her husband, Jesse Barrett, “knew that our faith would be caricatured, we knew our family would be attacked” if Mr. Trump nominated her, and had discussed in advance whether to submit to that level of scrutiny.

While she said her faith was important to her, Judge Barrett — a member of People of Praise, a tight-knit Christian community inspired by the traditions of charismatic Christianity — said it would have no bearing on her work as a justice.

“I have a life brimming with people who have made different choices, and I have never tried, in my personal life, to impose my choices on them,” said Judge Barrett, who teaches at Notre Dame, a Catholic university, and serves on an appeals court in Chicago. “The same is true professionally.”

She spoke in deeply personal terms about her family’s experience on matters of race, saying that she had wept with her 17-year-old daughter, Vivian, who is Black, after the killing of George Floyd in police custody in May in Minneapolis.

Senate Republicans spent much of the first day of questioning alternating between burnishing Judge Barrett’s image and arguing that Democrats were inflating the risk posed to the Affordable Care Act, abortion rights and gay marriage. In doing so, said Senator Mike Lee, Republican of Utah, they were acting as if the Supreme Court were a supergovernmental entity ruling the country.

At many points, senators on both sides simply used their 30-minute block of time to give speeches about the court and the law, forgoing perhaps their only opportunity to solicit public answers from Judge Barrett before she takes a lifetime appointment.

“It speaks volumes that collectively they have had very few questions for you and virtually none calling into question your credentials, which are impeccable, your record and what I think has been an extraordinary life you’ve led,” said Senator Ted Cruz, Republican of Texas.