Home » Politics » As Trump Rages, Voters in a Key County Move On: ‘I’m Not Sweating It’

DOYLESTOWN, Pa. — Even before the presidential transition was underway, Mike Carr had started to move on with his life.

It’s not as though much about American politics had changed in the immediate aftermath of the election, he noted. President Trump was still tweeting baseless conspiracy theories about voter fraud in all caps; cable news panels were still debating the effect the frenzy of accusations would have on democracy.

These were the kinds of things that, before the election, would have demanded Mr. Carr’s full attention. For most of the president’s term, Mr. Carr, a 53-year-old real estate lawyer, had been relentlessly attuned to the news cycle and the damage he felt Mr. Trump had done to the country. But ever since Nov. 7, when the election was called for Joseph R. Biden Jr., Mr. Carr has given himself permission to keep the television on mute.

In Bucks County, Pa., a suburb of Philadelphia and one of the state’s most consistently competitive counties down ballot, ardent Biden supporters like Mr. Carr could be forgiven for not unplugging entirely. Their candidate may have won their state by 1.2 percentage points, their county by more than four, but Mr. Trump and his legal team have continued to dispute the results, filing multiple lawsuits, losing multiple lawsuits and parroting unfounded allegations of fraud in the parking lot of a landscaping business not 45 minutes away.

By trying to sow distrust in America’s electoral infrastructure and egging on his advisers as they speak openly of a second term, Mr. Trump has confirmed some of his detractors’ worst fears.

Yet even in a state at the center of the president’s attacks, in a county where pre-election tensions ran high, many Biden supporters find themselves increasingly comfortable tuning out, moving on and looking forward to January. 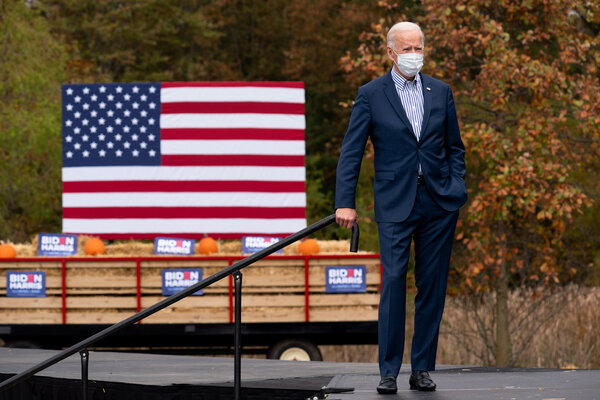 As in other counties across Pennsylvania and the country, Bucks County has seen a spike in coronavirus cases in recent weeks, with about 64 residents dying from the virus in November, the highest toll since the spring. For many voters here, worries about the virus, coupled with an overwhelming sense of Trump fatigue, have relegated the president to little more than a postelection footnote.

Sure, these voters acknowledged, Mr. Trump may still hold the power of the presidency and may, in their estimation, have no qualms about abusing it. But when it comes to the results of the election, they’ve taken to viewing his message as more of a nuisance with a sell-by date than a lasting danger to democracy — the rantings of a sore loser rather than the opening act of a coup by the leader of the free world.

“He’s just a whiny kid who didn’t get his way. I’m not sweating it,” said Blake Lertzman, 39, while taking a smoke break outside his technology repair shop in the Bucks County seat of Doylestown. “Right now it’s all about the virus. I worry about me and my girlfriend and my community.”

As for Mr. Trump’s fervent efforts to overturn the election, “nobody cares,” Mr. Lertzman went on, “unless you’re the kind of person who goes on Newsmax.”

Doylestown, which has about 8,300 residents and is over 90 percent white, leans further left than many other boroughs and townships in Bucks County. Nevertheless, many residents take pride in their region as an incubator of centrist politics, citing the county’s record, for instance, of voting for Hillary Clinton for president in 2016 while helping re-elect Senator Pat Toomey, a Republican.

Republicans and Democrats alike here recall Mike Fitzpatrick, the moderate Republican congressman who died of brain cancer this year, with fondness. And while many Democrats lament that his brother and successor, Brian Fitzpatrick — a Republican who represents Pennsylvania’s First District and just won re-election by 13 points — voted against impeaching Mr. Trump, they will also note unprompted that Mr. Fitzpatrick was recently ranked by the Lugar Center, a nonprofit in Washington, as the most bipartisan member of the House.

“We generally produce candidates in both parties that are pretty moderate,” said Ron Strouse, the mayor of Doylestown, a Democrat who describes himself as a “practical progressive.” “The history of ticket-splitting certainly showed this year.”

Still, like a number of other self-consciously moderate locales across America, Bucks County was not insulated from the partisan and cultural crosscurrents that defined the presidential election. And as the county seat, Doylestown played host to their suburban Philadelphia iteration.

“Rallies, counter-rallies, protests, demonstrations — we’ve had more than 45 since the beginning of this year alone,” Mr. Strouse said. In early September, hundreds gathered in the borough for dueling Black Lives Matter and “Back the Blue” demonstrations, the latter of which included a sea of Trump merchandise and a man reportedly shouting racial slurs and displaying a Nazi salute.

In October, as part of a pro-Trump “road rally,” more than 1,000 of the president’s supporters clogged traffic for miles as they converged on Doylestown, where they were met by a counter-demonstration of Biden supporters.

Local businesses boarding up in anticipation of summer protests, Trump supporters brandishing Confederate flags as they cruised down Main Street: Doylestown residents recited no shortage of ways their typically placid borough had seemed “tense” in the lead-up to the election.

But in the weeks since, even as Mr. Trump has electrified much of his base with his false claims of fraud and his campaign’s harried appeals via text to “chip in $10” to “STOP THE RADICAL Left from counting any ILLEGAL ballots,” Doylestown has remained at a calm remove. Demonstrations by Trump and Biden supporters alike, once a near-constant presence across town, have ground to a halt.

“People are more willing to tune out the theater now,” said Anthony Palazzolo, 30, who is a volunteer at the Doylestown Historical Society and a registered Republican who voted for Mr. Biden. “I’ve noticed it in small things, like people are less on their phones and interacting more on the sidewalks. People are seeing the light at the end of the tunnel.”

According to Mr. Palazzolo and others, the growing sang-froid about Mr. Trump’s conspiracy-mongering, even among the area’s most ardent Democrats, is in part a credit to local party leadership, members of which were quick to present a unified front after the county’s votes were tabulated — offering Bucks County residents a bipartisan show of confidence in their own results even as the president tried to seed doubt and promote division across the state.

“Our county had a great election, and that’s all I can say,” said Pat Poprick, the chair of the Bucks County Republican Committee. “I do not think there was any quote-unquote fraud here.”

Yet for all their fears of Mr. Trump, many Biden supporters here also expressed confidence that the country’s democratic institutions and traditions were robust enough to withstand the president’s attempts to subvert them — if only for two more months.

Larissa Hopwood, 41, a children’s musician and teacher, was among Mr. Biden’s most vocal supporters in Doylestown, taking the lead in organizing pro-Biden rallies to counteract the steady stream of Trump demonstrations.

Ms. Hopwood said the stakes of the presidential election could not have felt higher, particularly because she is the mother of a gender nonconforming child. The day after the election, she attended a “Protect the Results” rally in town. But armed with a confidence that, come Jan. 20, Mr. Biden will be president of the United States, no matter how many lawsuits Mr. Trump files, she has found herself embracing a new sense of lightness, however incrementally.

“I didn’t even realize it for awhile, but for a week after Biden won, I posted zero Instagrams,” she said. “I think my mind-set was, ‘Let’s just tune it out: We had our victory.’”

Still, despite feeling perhaps a bit less compelled to post and engage daily with political content, she admitted being frustrated by how “puffy” her social feeds seemed shortly after the election — posts about lighter topics like, say, “The Crown,” or People magazine’s “Sexiest Man Alive” cover.

But any concerns about complacency among fellow progressives seemed to stem less from concerns over Mr. Trump’s language and actions in this moment, and more from a desire to maintain momentum heading into the Biden era. In other words, Ms. Hopwood said, she’s not terribly worried that a presidential coup is afoot. “There are government employees in charge of making this transition happen,” she said. “I mean, we are still the United States.”

And ultimately, for Mr. Biden’s supporters here, blocking out the president is all the easier when even the neighborhood’s most outspoken Trump supporter seems to have moved on.

Daniel Compain, 65, a Cuban-American who fled Fidel Castro’s regime as a child, beamed as he recalled how pedestrians would grimace as they passed the enormous Trump flag he’d hung outside the window of his apartment near Main Street.

In an interview at a Starbucks nearby, he maintained that he would not accept the results of the election until the Electoral College officially voted in mid-December. He also had questions, he said, about whether Dominion voting machines had deleted ballots cast for Mr. Trump, echoing false claims made by the president and his personal lawyer, Rudolph W. Giuliani.

And yet when asked why he had decided to take his Trump flag down, Mr. Compain responded as if the answer were self-evident.

“Well, the election is over,” he said.