NEWTON, Iowa — As Iowa set a record for patients hospitalized with Covid-19, Gov. Kim Reynolds appeared at an indoor fund-raiser for the Republican Party this week, just days after joining President Trump at one of his huge rallies in Des Moines, where she tossed hats to the clamorous crowd.

At neither event were social distancing or face masks high priorities. The rally last week defied guidelines by the White House’s own health experts that crowds in central Iowa be limited to 25.

Iowa’s governor is not on the ballot next month. But her defiant attitude toward the advice of health experts on how to fight the coronavirus outbreak, as her state sees a grim tide of new cases and deaths, may be dragging down fellow Republicans who are running, including Mr. Trump and Senator Joni Ernst.

Ms. Reynolds, the first woman to lead Iowa, is an avatar of the president’s approach to the pandemic, refusing to issue mandates and flouting the guidance of infectious disease experts, who say that universal masking and social distancing are essential to limiting the virus’s spread. Defying that advice has eroded support for both Mr. Trump and Ms. Reynolds in Iowa, especially among voters over 65, normally a solid Republican constituency, according to public and private polls.

“Our older Iowans — many have not been able to leave their homes because they do not feel safe,” said Representative Cindy Axne, a first-term Democrat who represents Des Moines and southwest Iowa. “If you go into a grocery store, the large majority of people are not wearing masks.”

Ms. Axne added that disappointment with the governor’s handling of the virus was lifting Democrats like her who are on the ballot this year. “Voters know we’re standing up to keep their families safe,” she said.

A Monmouth University poll on Thursday showed Democrats are leading in three of Iowa’s four congressional races, with even the fourth, in deeply conservative Northwest Iowa, unexpectedly tight.

Rick Flanagan, a 61-year-old voter from Newton who had planned to vote for Ms. Ernst in the Senate race, recalled the moment he changed his mind in favor of her Democratic opponent.

It was “when Ernst said she didn’t believe the deaths and the science from Covid,” Mr. Flanagan said, referring to remarks by Ms. Ernst echoing a conspiracy theory that coronavirus deaths were being inflated and that medical professionals had a financial incentive to do so.

“That sealed it for me, and honestly, it soured me on Republicans,” Mr. Flanagan said. Ms. Ernst walked back her remarks and apologized to health care workers.

David Kochel, a former senior adviser to Ms. Reynolds, dismissed as “ridiculous” the idea that any Republican-leaning voters were defecting to Democratic candidates over the governor’s handling of the coronavirus. He said that in races this year, Iowa was reverting to its status as a swing state.

“The polls in 2020 are almost identical to the polls in 2018” before the pandemic, he said. “Iowa has very bright partisan lines.”

Iowa is part of a third surge of coronavirus infections nationally that is hitting the Midwest with particular ferocity. The state ranks among the top 10 nationally with the highest number of new cases per capita in the past week, according to New York Times tracking.

Ms. Reynolds has called mask mandates “feel-good” actions and refused to issue a statewide directive, unlike Republican governors in such states as Texas and Ohio. At the same time, she has blocked municipalities from enforcing their own mask edicts. Iowa was one of only a few states that never imposed a full stay-at-home order, and it let restaurants, bars and hair salons reopen earlier than most places. Still, the hospitality and retail sectors are struggling because consumers have not fully returned.

Through a spokesman, Ms. Reynolds declined an interview request.

Pressed in September if she would consider a mask mandate as cases began to rise again, Ms. Reynolds said, “Nope, not going to happen.” She said she trusted Iowans, armed with data about the virus, to make their own decisions.

After the Trump rally, where thousands filled close-set rows of chairs and bleachers at a Des Moines airport hangar, Ms. Reynolds told reporters that an emergency order she issued requiring social distancing in public “was never meant to prohibit First Amendment rights to allow people to gather.” 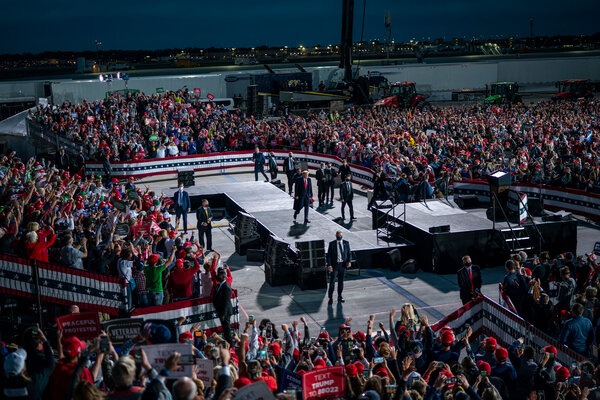 “I believe many more Iowans will be voting on coronavirus against Republicans,” he predicted.

Mr. Trump and Ms. Ernst — whose seat could play a decisive role in determining control of the Senate — are both in tight races in a state that Mr. Trump easily won four years ago. This week, Larry Sabato’s Crystal Ball, a nonpartisan handicapper, assessed Ms. Ernst’s race as leaning toward her Democratic opponent, Theresa Greenfield. More than $100 million has been spent on the race by outside groups, about equally for each candidate.

A Republican strategist who works in Iowa and other states said Mr. Trump’s mishandling of the virus had put many G.O.P. officials at risk. “I do not want to understate the extent to which Trump is the driver here,” said the strategist, speaking on the condition that he not be named to protect his clients. “You have the worst of both worlds: Trump refuses to take ownership, punts to governors, but then makes very clear through words and actions what he considers to be acceptable.”

Monmouth’s latest poll of the state found that more than three in five voters 65 and older were worried a lot about the coronavirus outbreak. Other polls have found that support for Ms. Reynolds’s handling of the virus declined sharply over the summer, as the number of new cases nearly doubled to about 1,000 a day.

The latest state data show hospitalizations at a record high and daily deaths reaching levels not seen since May. On Wednesday, 31 more deaths had been recorded over 24 hours and 534 Iowans were hospitalized with Covid-19, continuing a surge that began in early October.

A survey by The Des Moines Register and Mediacom in September showed a plurality of Iowans, 47 percent, disapproved of Ms. Reynolds’s handling of the pandemic, 15 percentage points worse than the number who disapproved in June. For the first time since Ms. Reynolds, 61, became governor in 2017, more Iowans said the state was on the wrong track than headed in the right direction, according to the poll.

The virus hit Iowa later than other states because the large rural population slowed community spread. In Jasper County east of Des Moines, a mostly rural area with a relatively low infection rate, many shoppers at a Walmart this week chose not to wear a mask, rejecting the greeter who offered them a free covering.

One who did wear a mask, David Richardson, said he was considering voting for a third-party candidate for president because he was put off by both Mr. Trump and Mr. Biden. The coronavirus “hasn’t really affected anything for me,” said Mr. Richardson, who is 36.

A Trump supporter, Sarah Farrand, said the virus ranked behind other political concerns, such as nominating judges who oppose abortion.

“Maybe it’s because we live in small-town America, but the virus hasn’t really affected us,” said Ms. Farrand, 42. “We can’t explore or have the freedom that we used to, but other than that, we’re pretty good.”

Even so, she has embraced wearing a mask. “The mask was the biggest change in my life,” she said.