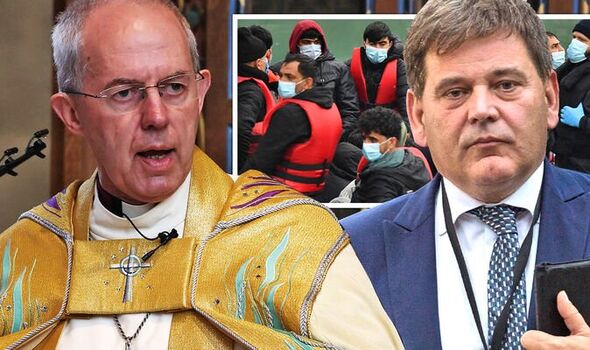 Conservative MPs accused Justin Welby of siding with people smugglers through his failure to offer alternative solutions to combating dangerous Channel crossings that are masterminded by criminal gangs.

Senior Tory Jacob-Rees Mogg accused the head of the Church of England of “misunderstanding” the government’s asylum policy.

And an exclusive poll for the Daily Express shows the public overwhelmingly opposes the archbishop’s remarks.

The archbishop used his Easter sermon to deliver a devastating rebuke to the “unethical” proposal to send people who arrive on boats on a one-way flight to the African state.

In his high-profile address at Canterbury Cathedral, he said the measures “cannot carry the weight of our national responsibility as a country formed by Christian values”.

“Sub-contracting out our responsibilities, even to a country that seeks to do well, like Rwanda, is the opposite of the nature of God who himself took responsibility for our failures.”

He said there were “serious ethical questions” about sending asylum seekers overseas, adding: “The details are for politics. The principle must stand the judgement of God, and it cannot.

The Archbishop of York also criticised the Government’s plans in his Easter Sunday sermon at York Minster.

Stephen Cottrell said he had found it “so depressing and distressing” that asylum seekers fleeing war, famine and oppression would not be treated with dignity and compassion.
“We can do better than this,” he told his congregation.”

“After all, there is in law no such thing as an illegal asylum seeker. It is the people who exploit them that we need to crack down on, not our sisters and brothers in their need. We don’t need to build more barriers and cower in the darkness of the shadows they create.”

He added: “Do we want to continue to be known as a country that opens proper, legitimate pathways for all who flee violence, conflict and oppression, not just those from Ukraine, but also those fleeing other conflicts and the effect of climate change?”

But Mr Rees-Mogg, the Brexit opportunities minister, told Radio 4: “I think he misunderstands what the policy is trying to achieve, and that it isn’t an abandonment of responsibility, it is in fact a taking on of a very difficult responsibility.”

The practising Catholic added: “The problem that is being dealt with is that people are risking their lives in the hands of people traffickers, to get into this country illegally.
“Now, it’s not the illegal bit of it, it is the encouragement of people traffickers that needs to be stopped.”

“They are in doing so not only risking their lives but supporting organised crime. What we need to do is focus on legal routes into this country of which there are quite a number.”

Tory backbencher John Redwood tweeted: “I thought the Easter message was love conquers all. We should forgive and reconcile. Could the Archbishop help do that instead of sharpening political divisions?”

He added: “So what is the Archbishop’s proposal on how to stop the lucrative and illegal trade by people traffickers? Why does he want to live with law-breaking and dangerous voyages?”

Ann Widdecombe former Home Office minister, told LBC: “Well, if you want to think of something ungodly, it is the people trafficking that is quite ruthlessly going on.”And I think putting an end to that is not ungodly, and a policy that says ‘look, if you think you can come to the UK without a valid asylum claim, for economic reasons when you’re already in safe countries like France or Italy or wherever it might be – you can’t, and this is what is going to happen’.

Ben Bradley, the Conservative MP for Mansfield, said: “I think we separated the church from the state a long time ago, so as I’ve said before, commenting on government policy is not Justin Welby’s job.

“He’s usually way out of tune with public opinion, and he undermines the role of the church when he comes out with daft statements like this.”
“This will prove to be a very popular policy with the British public.”

Conservative MP, Andrew Bridgen, claimed on Sky News the head of the Church of England’s comments represented “a little bit of naivety really.”

“But of course he’s perfectly entitled in a free and open democracy to espouse whatever views he may have.”

However, shadow minister Wes Streeting, also a practising Christian, said: “It really isn’t for politicians to tell the head of our church what he should or shouldn’t say in his Easter sermon. Conservative MPs should reflect on it instead.”

A Home Office spokesman said: “The UK has a proud history of supporting those in need of protection and our resettlement programmes have provided safe and legal routes to better futures for hundreds of thousands of people across the globe.”

“However, the world is facing a global migration crisis on an unprecedented scale and change is needed to prevent vile people smugglers from putting people’s lives at risk and to fix the broken global asylum system.”

“Rwanda is a fundamentally safe and secure country with a track record of supporting asylum seekers. Under this agreement, they will process claims in accordance with the UN Refugee Convention, national and international human rights laws.”

It comes as an exchange of letters published by the Home Office on Saturday night showed the department’s Permanent Secretary Matthew Rycroft warned Home Secretary Priti Patel that although the policy was “regular, proper and feasible”, there was “uncertainty surrounding the value for money of the proposal”.

Under the plans, which the Government said will curb migrant crossings of the English Channel in small boats, people who are deemed to have entered Britain by unlawful means since January 1 may be sent to Rwanda, where they will be permitted to apply for asylum in the African country.

Ms Patel said she expects other countries to follow the UK’s example, suggesting Denmark could be among those to reproduce the Government’s “blueprint”, while the Home Office insisted its approach is not in breach of refugee agreements.

Tom Hunt, the Tory MP for Ipswich, tweeted: “The leaders of the Church of England should be wary about clumsily intervening into complex political issues at the best of times. To do so on Easter Sunday feels very wrong. Archbishop of York views particularly wrong-headed. Claims he’s in tune with the majority of the public.”

While fellow Conservative MP Mike Wood told GB News: “They were unwise comments This will help to reduce the tragic losses at sea that we’ve had.”