“I don’t want to live like this, no-one should live like this – but I don’t have any options,” says Polly Richardson who finds herself at the sharp end of the lack of affordable homes in England.

For more than a year, she has lived out of a small camper van.

“This is my home. I’ve two sets of clothes in a box. I’ve got my cups and saucers in this drawer, my pans under this bed, and I have a little camping cooker.

“Winter time was horrendous because there was no heating.”

The 59-year-old grandmother of four from east Yorkshire, is one of half-a-million households that aren’t even counted as waiting for a council or housing association property, according to the National Housing Federation.

New research commissioned by the Federation from Herriot Watt University says the real number of people in England waiting for such homes is 3.8 million, representing 1.6 million households, or 500,000 more than is indicated by official government data.

She spent years working as a retail manager but after taking time off to look after her sick father, and then having a big argument with her sister, she found herself being forced to move into the van in March 2019.

“Without a job, you can’t have a house. Without a house, they won’t give you a job. I’m hoping somebody out there will give me a job,” she says. 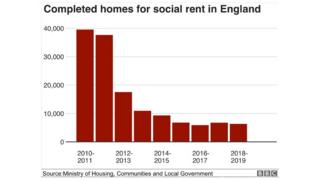 The main advantage of social housing – where either the local council or a housing association are the landlord – is that it’s more affordable than private rented accommodation, typically around 50% of market rents, and usually offers a more secure tenancy.

“What we are seeing is an escalating need for social housing and a lack of supply,” says Kate Henderson, chief executive of the National Housing Federation.

“Investing in social housing would boost the economy, it would create thousands of jobs, it would support supply chains in the construction industry and it would provide better, more secure, safe housing for people in need.”

Leaving her house is a daily grind as she struggles to manoeuvre her double buggy down the stairs.

Abigail has been bidding weekly for a three-bedroomed ground floor property for years, without success.

She says the council are encouraging her to search further afield to increase her chances being allocated somewhere suitable to live.

But she says: “My whole family live on this estate, so I’d like to try and stay as close as possible.

“As a single parent, who doesn’t drive, it would be hard for me to get anywhere and I’d feel more isolated than I already do, if I move too far from this area.”

When she was prime minister, Theresa May altered the way in which councils could use funding to allow them to build more homes.

Her government predicted the change would lead to 10,000 new council houses each year, a figure that hasn’t been reached since 2013-14.

While local authorities believe building that number is possible, experts say the pandemic could create problems in the construction industry.

The Ministry of Housing said it “didn’t recognise” the figures in the new analysis carried out by the National Housing Federation, describing them as a “major overestimation”.

It also highlighted its £11.5bn investment in affordable homes, to be spent between 2021 and 2026, some of which will be used on building homes for social rent.