My friend and colleague Peter Puloy-Wey, who has died aged 82, was a painter of landscapes full of soaring skies in the tradition of Turner, and a lecturer at St Albans School of Art and Craft who pioneered the professional development of arts therapists.

We were colleagues at St Albans from 1973 to 1992, together involved in developing the postgraduate master’s degrees in art therapy and dramatherapy. The success of these courses was significant in establishing the arts therapies as registered professions in the NHS (1999).

Peter’s role was central to the work, being responsible for the practical studio and media core of the training. His skill lay in facilitating an open and secure environment in which students could take risks to create personal and often emotional work. Many students reported how they rediscovered their creativity in his workshops. It was fundamental to the course philosophy that art therapists in their work with patients should be in touch with their personal creative process.

It was at the college that Peter met Monika Puloy, an art historian, whom he married in 1974. Peter’s own painting developed fresh energy from their relationship and summer visits to Monika’s home in the Austrian Alps. Inspired by the vast skies, swirling mist and thermals of the mountains, his spontaneous use of watercolour produced a range of colourful work full of movement and space. 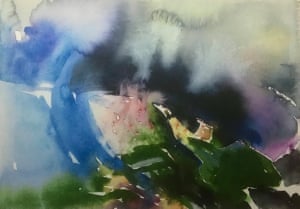 Born in Hackney, east London, Peter was the son of Jack Wey, an engraver for gold and silversmiths, and Catherine (nee McIver). His early years were affected by asthma and tuberculosis. The family moved to Letchworth, Hertfordshire, and he attended Norton Road school, one of the first designed around a quadrangle to allow open-air teaching and let light and air in.

Peter studied painting at St Albans, his early work being influenced by Norman Adams, who taught there. He returned to the school in the 1960s as a fine art lecturer on the foundation course and was appointed to the arts therapy department as a full-time lecturer in 1974, rising to senior lecturer. When the art school merged with the University of Hertfordshire in 1992, Peter continued lecturing on the fine art course until his retirement in the mid-90s.

Peter’s paintings were included in the Royal Academy Summer Exhibition as well as other group shows. I shared a joint exhibition with him, titled Landscape and Marks, in the Margaret Harvey gallery at the college in 1981, and the following year in Cambridge.

When Monika developed early Alzheimer’s disease in the late 90s, Peter’s care for her over many years was inspiring. Using his skills as a teacher he joined with her in singing and dancing groups, and encouraged her to use an instant camera, responding to moments of recognition in their home. These images became the Christmas cards they sent out.

Monika died in 2017. After a period of grieving Peter began painting again.

He is survived by his brother, Jack, a niece, Susan, and two nephews, Stephen and Paul.