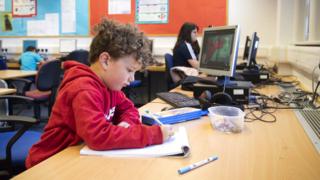 Ministers are facing pressure from councils and teaching unions to reconsider plans to reopen English primary schools to some pupils from 1 June.

At least 11 councils have expressed concerns over safety and timing.

He told BBC Breakfast that 1 June was “an important date for everyone to work towards” but he said the government accepted there may be “issues” from employers that need to be addressed “which might not mean that we’ll see a uniform approach”.

For most pupils, schools have been closed since 20 March.

From 1 June, children in Reception, Year 1 and Year 6 in England will be able to return to school if infection rates and the government’s other tests at the time allow it. England is the only UK nation to set a return date so far.

Schools in Wales will not reopen on 1 June, while those in Scotland and Northern Ireland may not restart before the summer holidays.

But on Tuesday, Calderdale Council in West Yorkshire advised its schools against wider reopening, following similar moves from Bury, Liverpool and Hartlepool.

Conservative-led Solihull Council also warned some school places may not be ready for the first week of June. Manchester Council and Birmingham City Council have made similar warnings.

Leeds City Council said it would not expect all its schools to reopen to all pupils “from day one”.

Judith Blake, the council leader, told BBC Radio 4’s Today programme that the government should be flexible when it comes to opening schools.

“Let’s move away from an arbitrary date and work with our schools… the government needs to understand that they need to take local factors into account,” the Labour councillor said.

Meanwhile Brighton and Hove City Council said it had advised schools only to reopen when risk assessments indicated it “safe to do so”.

A number of the 153 English local authorities have acknowledged safety concerns but have not urged all their schools to reject the proposed timeframe.

Two thirds of primary schools are supported by their local authority, which means they do not have complete freedom to make their own decisions, unlike academies.

Emma Knights, the chief executive of the National Governance Association, which advises school governors, told the BBC it would be hard for governors to ignore the position of their local authorities.

She said as councils might be legally judged the employers of school staff, governors would have to have very strong reasons to make a different decision.

The reproduction, or R number – the number of people that one infected person will pass the virus on to, on average – has come down across every part of the UK since the start of the epidemic.

But multiple research groups, including those at the University of Cambridge, show it has come down the most in London. It is higher in the north-east of England buy cheap essay.

Metro mayors in the north-west of England have made an “urgent” call for the release of regional Covid-19 reproduction rate figures, saying it would help residents making “informed decisions about the risk and help decide whether they wish to take a more cautious approach to the relaxation of the lockdown rules”.

Meanwhile, a survey of 29,000 members of the teachers’ union NASUWT found just one in 20 thought it would be safe for more pupils to return next month.

Patrick Roach, the union’s general secretary, said the government had “thus far failed to win the trust and confidence of teachers about the safety of reopening schools”.

“It is now imperative that the government takes every available opportunity to provide the necessary assurances that teachers are seeking,” he said.

The union leader called for all the scientific evidence from the government’s Scientific Advisory Group for Emergencies (Sage) to be made available to teachers and schools as soon as possible.

On Tuesday, deputy chief scientific adviser Prof Dame Angela McLean told the Downing Street coronavirus briefing that an effective system for tracing new coronavirus cases needed to be in place before lockdown restrictions could be changed.

Asked whether a test, track and trace system will be in place by 1 June, Robert Buckland said he hoped to see it work by that time, but it “won’t necessarily be as widespread and as full-blown as we would like”.

The doctors’ union, the British Medical Association, said schools should reopen “as soon as it is safe to do so”, but warned “a zero-risk approach is not possible”.

The BMA’s public health medicine committee chairman, Dr Peter English, said there was “growing evidence” that the risk to children from coronavirus is “extremely small”.

But he cautioned there is “no united view yet” on whether children can spread it.

“This is about ‘safe’ being an acceptable level of risk,” the BMA’s Dr Peter English wrote in the Daily Telegraph.

Last week, the BMA said Covid-19 infection rates were too high for England’s schools to reopen.

Attendance by primary school pupils will be voluntary and schools are reporting varied levels of interest from the parents they have contacted.

Secondary schools are likely to stay closed until September but the government hopes those facing exams next year – such as Years 10 and 12 – will get some time in school before the summer holidays.

On Monday, former Labour prime minister Tony Blair said Boris Johnson’s administration was right to start reopening schools as he said some children will have received “no education at all” during closures.

A Department for Education spokeswoman said: “We want children back in schools as soon as possible, because being with their teachers and friends is so important for their education and their wellbeing.

“Plans for a cautious, phased return of some year groups from 1 June, at the earliest, are based on the best scientific and medical advice. The welfare of children and staff has been at the heart of all decision making.

“We have engaged closely with a range of relevant organisations, including the unions, throughout the past eight weeks, including organising for them to hear directly from the government’s scientific advisers last Friday, and will continue to do so.”