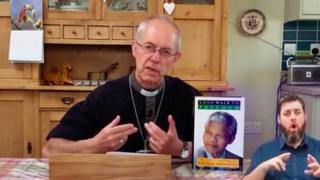 Even for an archbishop this must have been a tough gig.

The Archbishop of Canterbury had to deliver a sermon to what was claimed to be the UK’s biggest ever school assembly.

He couldn’t even tell them to stop talking at the back, because all the children were watching online.

The Most Reverend Justin Welby was addressing the Oak National Academy, the virtual school that has sprung up to serve millions of pupils studying at home during the coronavirus lockdown.

“I suspect this year, 2020, will stick in the mind for many reasons and there are lots of things that you will be going through,” the leader of the Church of England told his young audience.

The word he focused on was “hope”.

“Hope means the certain expectation of something you don’t have yet, but you will have in the future because it’s been promised by God,” said the archbishop.

“Hope is hope of life, hope of purpose, hope of peace, hope of justice, equality and a good future,” he said, talking from his kitchen, as he did when he delivered his sermon on Easter Sunday.

This was echoed by two of the pupils who introduced the archbishop, Eternity Carter and Marvellous Matthew-Okoromi.

“Hope is something that’s in my heart to let me have strength,” said Eternity from Sneinton primary school in Nottingham.

So what examples do you use in a modern assembly, to an audience of many faiths and none?

There were not going to be any clunky sporting metaphors, nothing along the lines of “in a way Jesus is like a goalkeeper”.

Instead there was a big visual clue in the book standing beside him on the kitchen table, Nelson Mandela’s autobiography, Long Walk to Freedom.

“May your choices reflect your hopes not your fears,” said Archbishop Welby, quoting the former South African president and drawing on his perseverance through long years of imprisonment.

It was a message of support in troubled times – and he touched on the sadness and pressures felt by families during the lockdown, including those who had faced illness and bereavement.

It was also literally homely, without any clerical backdrop, instead framed by a kitchen cupboard, a wooden camel that might have escaped from a Christmas crib set, and a radio that he perhaps uses to check out the opposition on BBC Radio 4’s Thought for the Day.

This was very much a moment of these strange days – the first assembly for a virtual school that is in only its second week.

The Oak National Academy is a minor miracle in its own right, put together by the creativity of teachers and offering free online lessons across age ranges and subjects.

His warm-up act, Education Secretary Gavin Williamson, (bare wall plus pot plant in background) spoke of how children might be surprised by how much they were missing school and seeing their friends.

“Many of you will be going through really tough times at home,” said the archbishop.

“How do you keep up hope? Patience, positivity and keeping going,” he reassured his virtual assembly.