Home » Education » Back Ofqual or I quit, chair of regulator told Gavin Williamson

The chair of Ofqual threatened to quit this week unless Gavin Williamson publicly backed the exams regulator and admitted it was behind the U-turn that salvaged millions of student grades, the Guardian has learned.

Roger Taylor’s ultimatum came after the education secretary tried to lay the blame for the exams fiasco at the door of Ofqual following a humiliating climbdown that scrapped A-levels and GCSEs awarded by algorithm.

Taylor went directly to Williamson to demand a public statement of support or he would resign. It came the day before hundreds of thousands of pupils in England received their GCSE results.

So serious was the threat of a void at the top of Ofqual that Amanda Spielman, Taylor’s predecessor and now chief inspector of the schools watchdog Ofsted, was being lined up to potentially step in and support the regulator, it is understood. She could still be called on if Taylor or Ofqual’s chief executive, Sally Collier, resigns.

Williamson’s Department for Education (DfE) – after seeking approval from Downing Street – hurriedly issued a statement on Wednesday saying: “We have full confidence in Ofqual and its leadership in their role as independent regulator.”

To placate Taylor, the DfE also confirmed that it had been Ofqual’s decision to drop grades decided by algorithm in favour of grades recommended by teachers, and that it had been backed by the government in doing so. 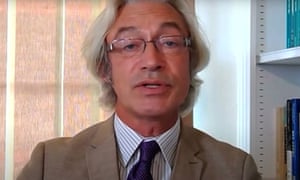 Williamson is said to have initially resisted issuing the clarifying statement, wanting Ofqual to “meet him halfway” over who was accountable for the decisions that led to the fiasco that began last week when A-level results were found to disproportionately hit disadvantaged students.

But the government is said to have backed down because it feared further fallout would fatally undermine public confidence in the GCSE results being issued in Ofqual’s name on Thursday, and already being criticised for over-optimistic grading.

Taylor’s threat to resign carried significant weight with ministers because he is a non-executive chair rather than an Ofqual employee. Without the presence of formal constraints on speaking out, he would be free to divulge communications with ministers and criticise the government. Williamson has faced repeated questions as to when he became aware of the algorithm’s flaws.

“[I have] every confidence that the system we have put in place is a robust system, a system that’s fair”

“The system, for the overwhelming majority of young people, is going to deliver credible, strong results. It’s a robust system, it’s a fair system, it’s making sure that young people get the grades that they’ve worked so hard towards”

“Most young people … will get the grade that the teacher sent in to the exam board that they thought they would get.”

Q) “Can you give a cast-iron guarantee that you will not be forced into the embarrassing U-turn that John Swinney and Nicola Sturgeon were in Scotland?”

“Let’s be in no doubt about it, the exam results that we’ve got today are robust. They’re good, they’re dependable for employers. It’s very important that for years to come people should be able to look at these grades and think these are robust, these are dependable”

“This is it… No U-turn, no change… [In Scotland] you’ve got a system where there aren’t any controls, you’ve got rampant grade inflation. There’s been no checks and balances in that system; it degrades every single grade as a result and in-baked unfairness”

The revelations cap two weeks of chaos and confusion, and near-universal derision, as ministers insisted on pressing ahead with results based on what is now accepted to have been a flawed algorithm, following school closures and exam cancellations prompted by the coronavirus pandemic.

While Taylor and Williamson apologised to students in public statements on Monday, Collier has made no media appearances despite her duties, including being the public face of the regulator. Sources say that Collier, even before the exam results saga, was not seeking reappointment as chief regulator when her term expires in April next year.

Taylor’s only public comments came on Monday, in TV clips and a statement on Ofqual’s website explaining the decision to ditch the grades generated by its algorithm.

“We understand this has been a distressing time for students, who were awarded exam results last week for exams they never took,” Taylor said before pivoting to blame Williamson. “Ofqual was asked by the secretary of state to develop a system for awarding calculated grades which maintained standards and ensured that grades were awarded broadly in line with previous years.”

Ofqual’s A-level algorithm: why did it fail to make the grade?

With Taylor and Collier – now being advised by the public relations firm Public First – lying low, Williamson and the schools minister, Nick Gibb, did the rounds at radio and TV studios to defend the decision.

While the Guardian had earlier reported that Ofqual’s algorithm would downgrade 39% of grades recommended by teachers, the scale of the disaster became apparent when A-level results were issued on 13 August and parents and students reported bizarre and inexplicable results.

By Monday, Williamson was claiming he had only become aware “over the weekend” of the scale of the problems, and repeatedly declined to say whether he believed Collier should resign as chief executive. He appeared to take credit for the U-turn, saying in interviews on Tuesday there were “large numbers of youngsters … [who] wanted to see action taken, that’s what I’ve done”.

Ofqual’s role came under considerable criticism from Tory MPs, including Robert Halfon, the chair of the Commons education committee, who said the organisation should be wound up and its role taken back within the DfE.

Ofqual was established under Labour as an independent regulator by Ed Balls as education secretary to insulate politicians after his bruising battles involving standardised testing in 2008.

Both Collier and Taylor, alongside ministers, can expect to be grilled by Halfon’s committee when parliament returns next month, assuming both are still in their posts.

Williamson has also come under intense political pressure over his handling of the fiasco, with a string of Conservative MPs, including the minister Penny Mordaunt, going public with their concerns about the discredited algorithm before it was ditched on Monday.

Just two days earlier, after the publication of the results prompted widespread protests from students, parents and teachers, the education secretary had insisted there would be “no U-turn, no change”.

Ofqual published a 300-page explanation of its algorithm alongside the A-level results. The Guardian revealed this week how external advisers told the regulator at least a month ago that its formula for deciding English A-level and GCSE results was “volatile” and risked producing erratic outcomes, according to sources.

One adviser reportedly told the Daily Mail it was evident that the algorithm would fail as soon as schools began submitting their teacher-assessed grades in early June. “There was a very specific point when it became doomed,” he reportedly said. “There was clearly always a potential this could blow, because of the nature of it.”

Angela Rayner, the deputy Labour leader, said: “It is clear that there is a deepening crisis at the heart of government, leaving the public with no faith in the exam process or confidence that ministers have a plan to get our young people back to school in September.

“Instead of passing the buck and failing to take responsibility, we need full transparency from the government about what precisely went wrong and who is responsible.”