Home » Business » The Future Farmers of France Are Tech Savvy, and Want Weekends Off

YVELINES, France — On a century-old farm that’s now a start-up campus in this verdant region west of Paris, computer coders are learning to program crop-harvesting robots. Young urbanites planning vineyards or farms that will be guided by big data are honing their pitches to investors.

And in a nearby field on a recent day, students monitored cows equipped with Fitbit-style collars that were tracking their health, before heading to a glassy, open work space in a converted barn (with cappuccino makers) to hunch over laptops, studying profitable techniques to reverse climate change through farming.

The group was part of an unorthodox new agricultural business venture called Hectar. Most of them had never spent time around cows, let alone near fields of organic arugula.

But a crisis is bearing down on France: a dire shortage of farmers. What mattered about the people gathered at the campus was that they were innovative, had diverse backgrounds and were eager to start working in an industry that desperately needs them to survive.

“We need to attract an entire generation of young people to change farming, to produce better, less expensively and more intelligently,” said Xavier Niel, a French technology billionaire who is Hectar’s main backer. Mr. Niel, who spent decades disrupting France’s staid corporate world, is now joining an expanding movement that aims to transform French agriculture — arguably the country’s most protected industry of all.

“To do that,” he said, “we have to make agriculture sexy.” 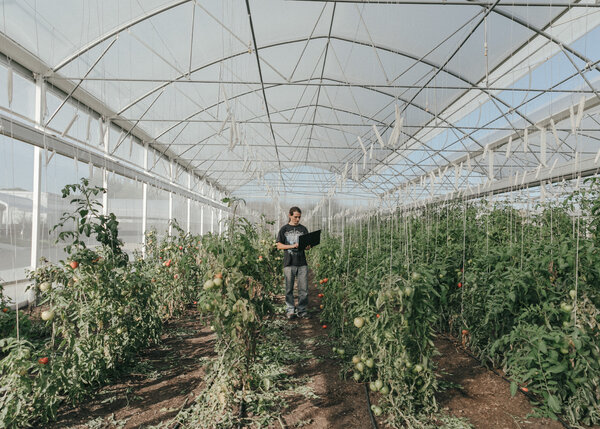 France is the European Union’s main breadbasket, accounting for a fifth of all agricultural output in the 27-country bloc. Yet half of its farmers are over 50 and set to retire in the coming decade, leaving nearly 160,000 farms up for grabs.

Despite a national youth unemployment rate above 18 percent, 70,000 farm jobs are going unfilled, and young people, including the children of farmers, aren’t lining up to take them.

Many are discouraged by the image of farming as labor-intensive work that ties struggling farmers to the land. Although France receives a staggering 9 billion euros ($10.4 billion) in European Union farm subsidies annually, nearly a quarter of French farmers live below the poverty line. France has faced a quiet epidemic of farmer suicides for years.

And in contrast to the United States, where the digital evolution of agriculture is well underway, and huge high-tech hydroponic farms are multiplying across the land, the farm-tech revolution has been slower to take hold. The industry in France is highly regulated, and a decades-old system of subsidizing farms based on size rather than output has worked as a brake on innovation.

The French government has backed some changes to Europe’s mammoth farm subsidy program, although critics say they don’t go far enough. Still, President Emmanuel Macron has sought to rejuvenate agriculture’s image, and has called for a shift to “ag-tech” and a rapid transition toward environmentally sustainable agriculture as part of a European Union plan to eliminate planet-warming emissions by 2050.

But to capture an army of young people needed to carry farming into the future, advocates say, the lifestyle of the farmer will have to change.

“If you say you have to work 24 hours a day, seven days a week, that won’t work,” said Audrey Bourolleau, the founder of Hectar and a former agriculture adviser to Mr. Macron. “For there to be a new face of agriculture for tomorrow, there needs to be a social revolution.”

Hectar’s vision revolves around attracting 2,000 young people from urban, rural or disadvantaged backgrounds each year, and equipping them with the business acumen to be farmer-entrepreneurs capable of producing sustainable agriculture ventures and attracting investors — all while generating a profit, and having their weekends free.

Modeled on an unconventional coding school called 42, which Mr. Niel founded a decade ago, it operates outside France’s education system by offering free tuition and intensive training, but no state-sanctioned diploma. Backed mainly by private investors and corporate sponsors, Mr. Niel is betting that Hectar’s graduates will be more entrepreneurial, more innovative and ultimately more transformative for the French economy than students attending traditional agricultural universities. (Hectar can shake things up only so much: Students would still need a diploma from an ag school in order to qualify to be a farmer in France.)

Some of those principles are already starting to appear in French agriculture. At NeoFarm, an agro-ecological vegetable farm on a compact two-acre plot half an hour east of the Hectar campus, four young employees spent a recent afternoon monitoring laptops and programming a robot to plant seeds along neat rows.

NeoFarm, started by two French tech entrepreneurs, is on the edge of a trend in France of investors setting up small farms near population centers, and growing healthy food using less fossil fuel and fertilizer. While big French farms use technology to raise yields and cut costs, boutique farms can use tech to take advantage of much smaller lots, curbing costs and reducing tedious labor tasks to create an attractive lifestyle, said Olivier Le Blainvaux, a co-founder who has 11 other start-up ventures in the defense and health industries.

“Working with robotics makes this an interesting job,” said Nelson Singui, 25, one of the workers recently hired at NeoFarm to care for the crops and monitor systems that automatically sow seeds, water plants and harvest carrots.

Unlike other farms where Mr. Singui had worked, NeoFarm offered regular work hours, an opportunity to work with the latest technology and a chance to advance, he said. It plans to open four new farms in the coming months.

Such expansion comes as so-called neo-peasants have begun migrating from French cities to rural areas to try their hand at sustainable farming, attracted to a career where they can help fight climate change in a country where 20 percent of greenhouse gas emissions come from agriculture.

But some of these rookie farmers don’t know how to make their ventures financially viable, said Mr. Le Blainvaux. New operations like NeoFarm, and schools like Hectar, aim to retain newcomers by helping them nurture profitable enterprises and make a break from government subsidies, which critics say discourage innovation and risk-taking.

“It’s very easy when you’re not in this industry to say, ‘I’ll make it sexy with tech,’” said Amandine Muret Béguin, 33, head of the Union of Young Farmers for the Ile-de-France region, which is home to Hectar’s 1,500-acre campus. “You can have the best schools and the best robots, but that doesn’t mean you’ll have a better life.”

Ms. Muret Béguin, who proudly hails from a farming family and cultivates about 500 acres of cereal grains, said that French farming had already evolved toward greater ecological sustainability, but that the general public wasn’t aware.

Members of her group question the need for a campus like Hectar when, they say, state-certified agricultural schools that already teach farm management and technology are severely underfunded. The way to draw more people into agriculture, Ms. Muret Béguin added, is for consumers “to recognize and value the hard work farmers are already doing.”

Yet for people like Esther Hermouet, 31, who hails from a winegrowing family near Bordeaux, Hectar is answering a need that other agricultural institutions aren’t offering.

That afternoon, Ms. Hermouet mingled with a diverse group of young students, including an unemployed audiovisual producer, a Muslim entrepreneur and an artisanal cider maker.

Ms. Hermouet and her two siblings were on the verge of abandoning the vineyard run by their retiring parents, fearing that taking over would be more trouble than it was worth. Some of their neighbors had already seen their children leave the vineyards for easier jobs that didn’t require waking at the crack of dawn.

But she said her experience at Hectar had made her more optimistic that the vineyard could be made viable, both commercially and from a lifestyle perspective. She learned about business pitches, carbon capture credits to help maximize profit and soil management techniques to reduce climate change. There were suggestions about working smarter in fewer hours, for instance by using technology to identify only isolated vines that need treatment.

“If my brother, sister and I are going to work the earth, we want to have a proper life,” she said. “We want to find a new economic model and make the vineyard profitable — and also make it sustainable for the environment for decades to come.”

For Mr. Niel, who made his fortune disrupting the French telecom market, joining a movement to modernize the way France is fed is the equivalent of taking a moonshot.

“It’s a vision that can sound too beautiful to be true,” Mr. Niel said. “But often, we find that it’s possible to turn such visions into a reality.”