Mr Pompeo also said the US stood with its allies against China’s “coercive bully tactics”.

The Trump administration has repeatedly attacked Beijing for what it says is an attempt to end Hong Kong’s autonomy.

HSBC, which is UK-based but was formed in Hong Kong in 1865, declined to comment on Mr Pompeo’s remarks.

US-China ties have deteriorated rapidly since the start of the year over Hong Kong and the coronavirus pandemic.

The statement on Tuesday by America’s top diplomat came after both HSBC and Standard Chartered expressed support for China’s national security legislation in Hong Kong.

He said that last week’s signing of a petition supporting the new legislation by HSBC’s Asia-Pacific CEO, Peter Wong, was a “show of fealty seems to have earned HSBC little respect in Beijing, which continues to use the bank’s business in China as political leverage against London”.

Mr Pompeo said that the US was prepared to help the UK after Beijing reportedly threatened to punish HSBC and drop commitments to build nuclear power plants in the UK unless it allowed China’s Huawei to build its 5G phone network.

He also repeated that Washington sees Huawei as “an extension of the Chinese Communist Party’s surveillance state”. 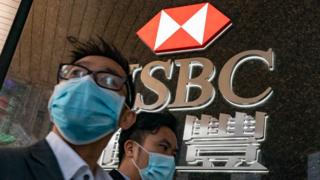 Last month, China’s parliament approved a resolution that would impose legislation on Hong Kong that criminalises criticism of the city’s government.

Senior UK and US politicians last week also criticised HSBC and Standard Chartered after they both backed the national security law for Hong Kong.

Both HSBC and Standard Chartered have their headquarters in London, but make most of their profits in Asia, with Hong Kong serving as a major base for their operations.

On Saturday, the Daily Telegraph reported that HSBC’s chairman, Mark Tucker, had warned Britain against a ban on networking equipment made by Huawei, claiming the bank could face reprisals in China.

A spokeswoman for Standard Chartered said the bank had no comment to make on Mr Pompeo’s statement.