LoanDepot, one of the mortgage industry’s biggest nonbank lenders, was riding a boom.

Historically low interest rates last year sent residential loan refinancings to their highest level in well over a decade. And thanks to an aggressive sales push, loanDepot made $100 billion in loans, a company record.

But in its eagerness to grow before an initial public offering early this year, loanDepot illegally cut corners and processed thousands of loans without required documents such as employment and income verifications, according to a lawsuit filed Wednesday by one of its former top executives.

The allegations by Tammy Richards, loanDepot’s former chief operations officer, echo some of the abuses that fueled the mortgage meltdown in 2008, which led to extensive new industry regulations. Ms. Richards, who was a midlevel executive at one of the most notorious firms during the crisis, said in her suit that she had been forced out of her job at loanDepot for refusing to break the rules.

“I reported this to everyone I could internally, and I was retaliated against,” Ms. Richards, 56, said in an interview.

Her lawsuit, filed in California Superior Court in Orange County, accuses Anthony Hsieh, loanDepot’s chief executive, of leading a scheme to increase sales by flouting regulations and taking on risky loans, some of which, the suit said, were intentionally excluded from the company’s standard underwriting process. The suit — which cites copies of corporate emails, internal messages and company documents that describe the plan — said employees were offered bonuses to process the loans fast and without asking questions.

In a statement, loanDepot said that it took the claims in the lawsuit seriously, but that an outside investigation had previously found them to be without merit.

“We intend to defend ourselves vigorously against these outlandish allegations and will respond as appropriate during the legal process,” the company said. 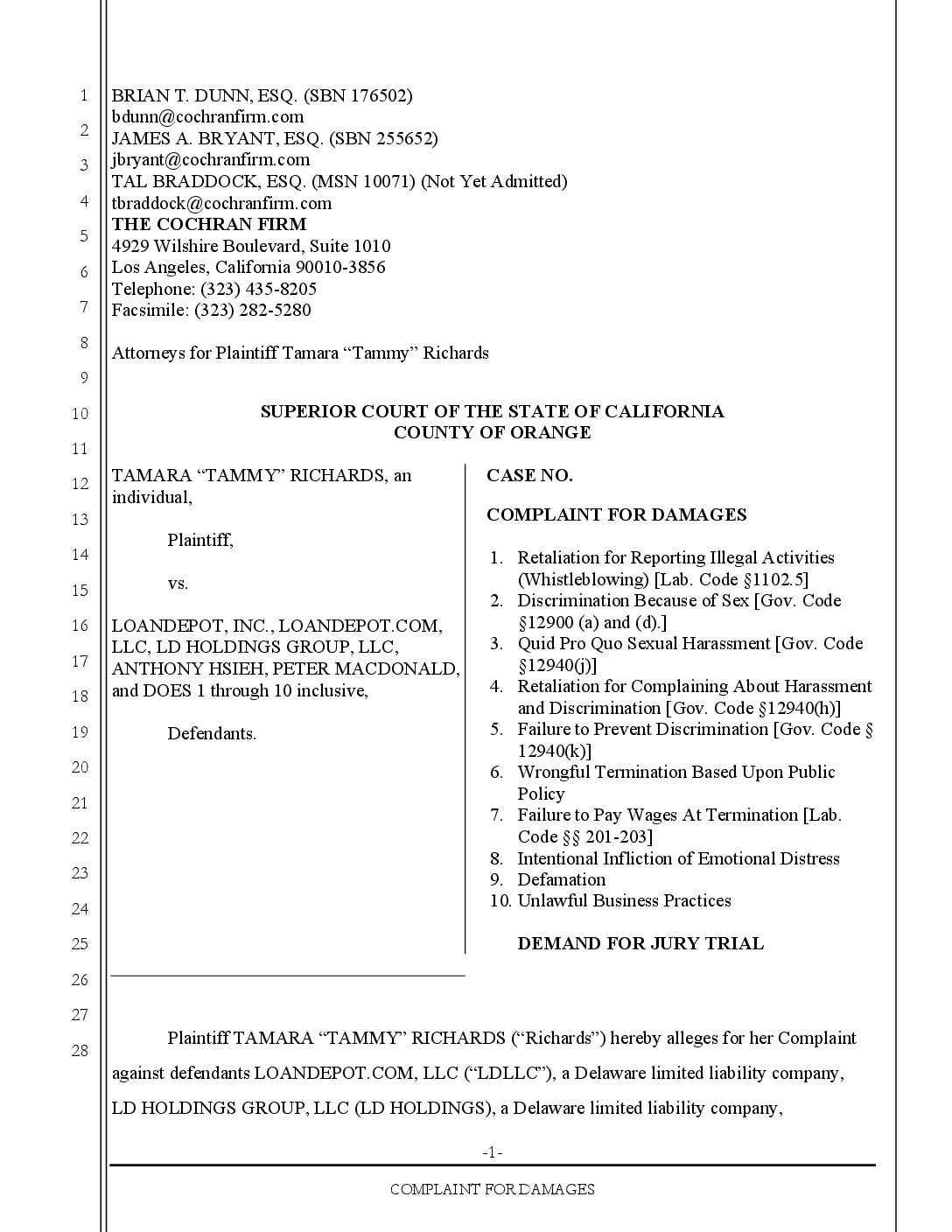 Read the Lawsuit Against LoanDepot

Tammy Richards, a former top executive at loanDepot, has accused the company of forcing her out of her job because she refused to approve loans without documentation.

LoanDepot, based in Foothill Ranch in Orange County, was founded in 2009 by Mr. Hsieh, who had created and sold two previous online lending companies. The first, LoansDirect, was bought in 2001 by E-Trade; the second, HomeLoanCenter, was acquired in 2004 by LendingTree.

Those deals made Mr. Hsieh rich, but loanDepot catapulted him to a new stratosphere of wealth. Mr. Hsieh — by far its largest individual shareholder — became a billionaire on paper when the firm went public in February. LoanDepot’s shares debuted at $14; they have since dropped to about half that price, leaving the company with a valuation of around $2.2 billion.

The planned initial public offering was a motive for the company’s executives to cover up Mr. Hsieh’s increasingly reckless behavior, Ms. Richards said in her suit. In 2020, as the offering approached, loanDepot paid what it described in regulatory filings as “a special one-time discretionary bonus” to its leaders. Mr. Hsieh received $42.5 million, and other top executives took home cash bonuses ranging from $9 million to more than $12 million.

Ms. Richards, who said she was demoted in November and left out of that special bonus round, resigned in March. Her lawsuit seeks compensation for unpaid bonuses and forfeited stock that she estimates would have been worth at least $35 million.

LoanDepot is in the vanguard of a group of online upstarts that use technology to speed up and simplify mortgage loans. Last year, it originated nearly 300,000 — twice the number it did a year earlier — and was the nation’s fourth-largest mortgage provider in dollars lent, according to iEmergent, which tracks industry data.

Mr. Hsieh has long put a priority on growth and regularly adds new incentives and products to his firm’s lineup. “We will never be a company that is satisfied or one that rests on our laurels,” he told analysts on an earnings call last month. Some workers have said they appreciate the intensity and opportunities for big paychecks, but complaints about crushing workloads, high turnover and burnout are common among former employees.

Ms. Richards’s complaint describes the company, which she joined in 2018, as having a “misogynistic ‘frat house’ culture,” where harassment was commonplace and top sellers were feted at wild parties that sometimes involved drugs and prostitutes.

In 2019, a high-ranking woman at loanDepot accused a male executive of sexually assaulting her at a company party on Mr. Hsieh’s boat; Ms. Richards, who was not at the event, was asked to run the investigation because the company’s male officials, including its head of human resources, did not want to, her suit said. (She said she had learned that both employees were drunk and disagreed about whether the encounter had been consensual.)

But the company’s lending was always done by the book, Ms. Richards said — until August last year, when Mr. Hsieh began complaining that loanDepot’s loan volume was lagging behind Quicken Loans’ Rocket Mortgage, the industry’s largest refinancing lender. At a sales meeting that month that she attended, Mr. Hsieh told employees to move faster and “immediately close loans regardless of documentation,” Ms. Richards said in her complaint.

As loanDepot’s head of operations, overseeing more than 4,000 employees, Ms. Richards managed the process of completing its loans. She said she had refused to allow loans to be finalized until all the required vetting was complete, but Mr. Hsieh saw that as unacceptably slow. By early November, Ms. Richards said in her lawsuit, he had stripped her of her decision-making responsibilities, and the company pressured her to accept the newly created, lower-paid position of chief mortgage officer — effectively a demotion.

Later that month, Ms. Richards said, she learned from other employees about an initiative called Project Alpha. Mr. Hsieh personally selected 8,000 loans and told employees to process them without the required documentation, according to emails and internal spreadsheets that she cited in her complaint; those loans were then deliberately excluded from the company’s standard post-closing internal audits.

Ms. Richards, who once worked at Countrywide Financial, one of the most notorious subprime lenders of the mortgage crisis, said loanDepot’s actions reminded her of the misdeeds she had helped untangle after Bank of America bought the collapsed firm in 2008.

“The job was going to put me right in the middle of the inappropriate activity, of talking to regulatory agencies and certifying that the loans we give them are correct,” said Ms. Richards, who added that she had started having panic attacks.

She soon went on unpaid medical leave; her usual $1.2 million salary and bonus were cut off. Four months later, she resigned.

Other, lower-level workers who recently left loanDepot also describe a pressure-cooker culture. Several former employees, who asked not to be identified to protect their job prospects, said they were unaware of Project Alpha and had never been explicitly told to flout requirements, but each said the company’s blistering work pace had led to sloppiness and mistakes.

One loan officer who left last year said the company had set unreasonably high sales targets that forced employees to originate low-quality loans, many of which were likely to be rejected, just to meet their quotas. A loan processor who quit a few months ago said that she had often been assigned dozens of loans in a single day, and that customers had frequently received closing documents with inaccuracies. She added that Mr. Hsieh had threatened — at large company meetings — to personally fire those who couldn’t keep up.

Mr. Hsieh makes few apologies about his brash management techniques. When an employee survey of loan officers found that nearly half were unhappy in their jobs, Mr. Hsieh told them to “stop whining” and quit, according to an email that was forwarded to HousingWire, a trade news source.

On LinkedIn, where Mr. Hsieh maintains a chatty stream of posts, he once scoffed at the “top 10 rumors” about loanDepot, including “we work too hard” and “we play too hard.” Another item on the rumor list: “Regulators are shutting us down.”