Billionaire businessman Mike Ashley has bought the gym and fitness business from his rival and long-time critic Dave Whelan after they fell into administration.

Mr Ashley’s Frasers Group said it would buy 46 leisure clubs and 31 retail outlets from DW Sports Fitness for £37m to merge with its own business.

DW went bust earlier this month after its income evaporated during lockdown.

The firm owns 75 retail stores and 73 gyms in total, all of which had to close temporarily due to coronavirus restrictions.

Frasers, which also owns Lillywhites, Evans Cycles and House of Fraser, said the DW assets would “compliment (sic)” its own gym and fitness club portfolio, and would now be managed under its Everlast brand.

Susannah Streeter, senior markets analyst at Hargreaves Lansdown, said it was surprising the group had bought a gym business as they were still “grappling with the public’s reluctance to train indoors”.

“It’s likely to be some time before people bound back to the gym in greater numbers and it can be ascertained whether this latest acquisition will have been the right choice for the company.”

DW also owns the Fitness First gym chain which is unaffected by the administration.

Mr Ashley, who has been buying up struggling High Street brands over the last five years, has had a feud with DW Sports’ owner, Mr Whelan, dating back two decades.

In 2000, Mr Whelan was famously reported to have told his younger rival from the south: “There is a club in the north, son, and you’re not part of it.” 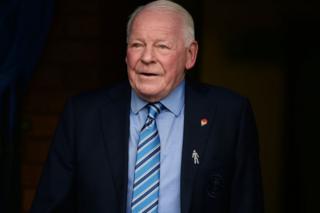 Mr Ashley later reported Mr Whelan’s JJB Sports business to the Office of Fair Trading, alleging it was involved in a price-fixing scheme over football shirts.

The OFT issued multi-million pound fines to those involved, including JJB.

Mr Whelan, 83, a former owner of Wigan Athletic football club, created DW Sports in 2009 when he bought 50 JJB Sports fitness clubs and the adjoining shops out of administration.

Frasers itself has been struggling during the pandemic, calling its most recent financial year the “most challenging” in its history.

In the year to 26 April, its sales climbed slightly, but profits dived by 20% to £143.5m due to lockdown store closures.

Last week, it said that more of its House of Fraser department stores were “anticipated” to close, likely resulting in further job cuts.

It has already shut 10 of the 59 stores it bought out of administration in 2018.