Bob Shanks, a television producer and executive who helped define the talk show and newsmagazine formats, working with Jack Paar and Merv Griffin and bringing “Good Morning America,” “20/20” and other programs to the air, died on Monday in Pittsfield, Mass. He was 88.

His son John said the cause was a stroke. Mr. Shanks had been living in a retirement center in Lenox, Mass.

Mr. Shanks began his television career in the 1950s, working as a talent booker and producer for “The Tonight Show With Jack Paar” and then as the longtime producer of “The Merv Griffin Show.” When Mr. Shanks left that show in 1970, Mr. Griffin paid tribute to him and his impact.

“Bob discovered, from the beginning, the Smothers Brothers, when he was the associate producer for Paar, and convinced Jack to put them on,” Mr. Griffin said on the air, according to “The Merv Griffin Show: The Inside Story,” a 2018 book by Steve Randisi. “When he became my producer in 1962, the first one he put on the show was Woody Allen, and then people like Tiny Tim, Bob Newhart, José Feliciano and Dick Cavett.”

But Mr. Shanks was particularly prominent in the 1970s, when he was a vice president at ABC. In 1975, he and another ABC vice president, Ed Vane, were given a tall assignment by Fred Silverman, the newly named president of the network’s entertainment division: Come up with something to challenge the decades-long dominance of NBC’s “Today.”

The result was “Good Morning America,” which had its premiere that November. The show sought to distinguish itself from “Today” with pep and new faces. It was Mr. Shanks who took the leap of faith and recruited David Hartman and Nancy Dussault, at the time best known as actors, to be the hosts. He also tapped the humorist Erma Bombeck, the journalist Geraldo Rivera and others. By the 1980s the show was rivaling “Today” in the ratings. 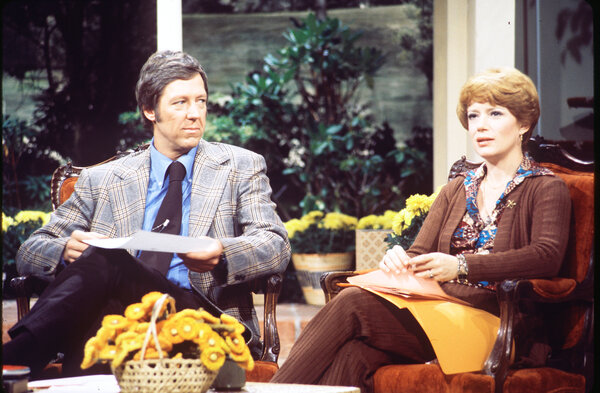 In 1978, Mr. Shanks brought “20/20” to the air, but the initial offering bore only a passing resemblance to the program that became the venerable ABC newsmagazine. “You either had to be ‘60 Minutes’ or not be it,” Mr. Shanks said in an interview with The Associated Press in 1993 for the program’s 15th anniversary.

What he offered to the viewing public in June 1978 leaned heavily in the “not” direction. There was a segment on how to pronounce and use difficult words — “a kind of ‘Sesame Street’ for post-pubescents,” John J. O’Connor wrote in his review in The New York Times. There was an animated segment featuring a Jimmy Carter doll singing “Georgia.” And there were two hosts, Harold Hayes and Robert Hughes, whom few seemed to like.

Tom Shales, reviewing the premiere in The Washington Post, said that watching it “was like being trapped for an hour at the supermarket checkout counter and having to read the front pages of blabby tabloids over and over again.”

Some blamed late meddling by Roone Arledge, president of the network’s news division, for the fiasco. “Everyone was behind Bob Shanks,” one anonymous staff member told Newsweek. “Then King Kong came down from the trees, mashing bananas in people’s faces and exercising his male dominance.”

By Week 2 Hugh Downs was in the host’s chair, and the program began to find its footing. It remains on the air, more than four decades later.

Robert Horton Shanks was born on Oct. 8, 1932, in Sullivan, Ill. His father, W. Glenn Shanks, worked for an oil company, and his mother, Deveta (Benoit) Shanks, was a homemaker.

Mr. Shanks grew up in Lebanon, Ind., and attended Indiana University in Bloomington, where he sometimes called basketball games on the campus radio station, WFIU. He graduated in 1954 with a degree in radio and television, then spent two years in the Army, where he produced training films and a weekly TV show.

John Shanks said his father went to New York thinking he might become an actor, but soon found himself working in television. In 1957 he secured “a coffee pour job,” as he later described it, on “America After Dark,” a short-lived NBC experiment in late-night programming. One of the people he met there, John Carsey, went on to work on Mr. Paar’s show and asked him to come aboard as talent coordinator.

Anne Edwards, in her biography “Streisand” (1996), told the story of Mr. Shanks’s role in booking Barbra Streisand on the Paar show in 1961 for her first national television appearance. She had been lobbying for a slot, the book said, but Mr. Paar wasn’t interested because he thought she looked and sounded too Jewish.

“Paar didn’t think she was right for his show,” Mr. Shanks was quoted in the book as saying. “I said ‘No’ to Barbra Streisand,” he added — until a day in April when Orson Bean, a Streisand fan, sat in as guest host. Mr. Shanks booked the young singer, who was a hit.

Mr. Shanks was later a producer of “Candid Camera” before joining Mr. Griffin’s show and, later, ABC in 1972.

After leaving ABC in 1978, Mr. Shanks wrote several TV movies and produced them with his wife, Ann Zane (Kushner) Shanks. In 1986 CBS News hired him to create “The Morning Program,” a short-lived news and entertainment show.

In addition to his son John, Mr. Shanks is survived by another son, Anthony; a daughter, Jennifer Kingsley; and four grandchildren. His wife died in 2015.

Mr. Shanks’s side projects included writing “S.J. Perelman in Person,” a one-man show drawn from Perelman’s writings, which played at the Cherry Lane Theater in Manhattan in 1989, with his wife directing and Lewis J. Stadlen starring.

He also wrote a number of books, including two novels and, in 1976, “The Cool Fire: How to Make It in Television,” which offered an unusually blunt insider’s perspective on the industry. In that book, he acknowledged that commercial TV was deliberately bland, thriving on “shows that will attract mass audiences without unduly offending these audiences or too deeply moving them emotionally.”

“Television,” he wrote, “is used mostly as a stroking distraction from the truth of an indifferent, silent universe, and the harsh realities just out of sight and sound.”