Home » Business » Automakers’ Transition to Electric Cars Got a Jolt From G.M.

A new president took office this month determined to fight climate change. Wall Street investors think Tesla is worth more than General Motors, Toyota, Volkswagen and Ford put together. And China, the world’s biggest car market, recently ordered that most new cars be powered by electricity in just 15 years.

Those large forces help explain the decision by G.M.’s chief executive, Mary T. Barra, that the company will aim to sell only zero-emission cars and trucks by 2035.

Her announcement, just a day after President Biden signed an executive order on climate change, blindsided rivals who usually seek to present a united message on emissions and other policy issues. But it was also years in the making. G.M. has had a love-hate relationship with electric cars going back decades, but under Ms. Barra, who took over in 2014, it has inched its way toward a full embrace of the technology.

She has also shown a penchant for making big moves that her predecessors might have considered brash or impulsive given the company’s reputation for deliberate — or plodding to some — decision making. When Donald J. Trump became president, she pushed him to relax Obama-era fuel economy standards that G.M. had endorsed when they were put in place. Then, after Mr. Trump lost his re-election bid in November, Ms. Barra withdrew from a lawsuit seeking to prevent California from maintaining its own high fuel standards.

Now, others are searching for the right response to Ms. Barra’s latest tack. The reaction from automakers and oil and gas companies has so far been muted. But Washington is abuzz with corporate lobbyists complaining in private about what they saw as a calculated move to burnish G.M.’s and Ms. Barra’s reputations even as the industry negotiates a new fuel-economy deal with the Biden administration.

A senior G.M. executive, Dane Parker, said the company was not seeking to curry favor with the new administration. Its decision, he argued, was based on a fundamental, dollars-and-cents analysis of where the auto industry is headed and the cars that it expects to become best sellers in the future.

“We are doing this to build a sustainable business,” Mr. Parker, the company’s chief sustainability officer, said in an interview on Friday. “We want to have a business in 15 years that’s a thriving business.”

G.M. has already committed to spending $27 billion to introduce 30 electric vehicles by 2025, and is building a plant in Ohio to make batteries for those cars and trucks. Mr. Parker said the company was looking at sites for more battery plants and working on future electric models.

“To be ready for 2035, I need to build battery plants, I need to do battery development, I need to develop electric vehicles,” he said.

Broadly, of course, the industry had been quietly gearing up for months for a possible change in the White House. Representative Debbie Dingell, Democrat of Michigan and a former G.M. executive, said in an interview, “I had been saying to all the autos: ‘When Joe Biden gets elected, your world will turn upside down. You’ve got to be at the table or else this thing gets jammed down your throat.’”

Ms. Dingell is starting to see that effort bear fruit, as other auto companies are expected to quickly come out in support of Mr. Biden’s plans. 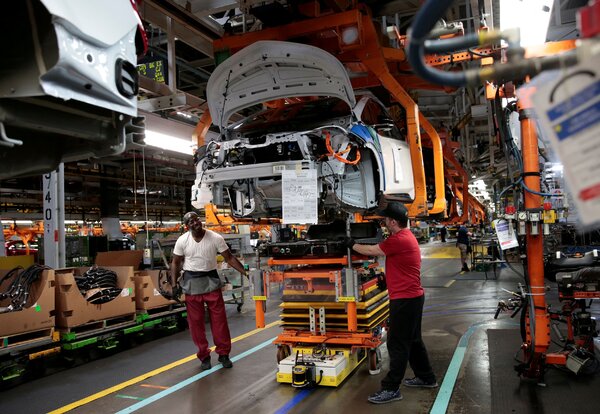 But while G.M.’s U-turn materialized in the weeks after the election, five of its competitors — BMW, Ford, Honda, Volkswagen and Volvo — had already legally bound themselves to tougher fuel economy standards in a deal with California. G.M. is not party to that agreement and can operate under the Trump rules until Mr. Biden’s policies are enacted, potentially giving the company more time to invest in research and technology.

When Mr. Trump was president, Ms. Barra told him that the Obama-era rules were too hard on manufacturers, requiring them to sell passenger vehicles that averaged 54.5 miles per gallon by 2025. Mr. Trump relaxed the standards to roughly 40 miles per gallon, which would require no new technology — and would have allowed the emission of nearly a billion more tons of heat-trapping carbon dioxide.

The five auto companies that signed the deal with California committed to an average fuel economy of 51 miles per gallon by 2026 and had to start ratcheting up their standards with cars sold in 2021 in the state.

The Biden administration is widely expected to follow the terms of that California deal as it seeks to impose new federal rules, but they are unlikely to be completed and in effect until 2023 at the earliest.

“From my perspective, G.M. is still in the environmental doghouse,” said Drew Kodjak, executive director of the International Council on Clean Transportation, a research and advocacy organization that works on emissions reduction policy. “That doesn’t mean G.M.’s statement is not important and groundbreaking, but the proof will be in the pudding.”

A G.M. spokesman said the company had not opposed the higher standards sought by California but supported the Trump administration because it thought having a single national standard was more important. G.M. had some reason to tread lightly. Mr. Trump had publicly attacked the company and Ms. Barra several times, including for a decision to close a plant in Ohio and increasing production in China.

Ms. Barra still has a prime seat at the White House negotiating table. On Thursday, she spoke by telephone to Gina McCarthy, Mr. Biden’s top domestic climate change adviser, who will play a lead role in creating the new auto rules, and Brian Deese, the head of the White House National Economic Council, according to a person familiar with the conversations.

While no other large automakers have set a target date for selling only electric vehicles, many have moved in that direction. Ford is spending billions to introduce battery-powered models. Customer deliveries of the first of them, the Mustang Mach E sport utility vehicle, started last month. Volkswagen said last year that it planned to spend 73 billion euros ($88 billion) on electric vehicles over the next five years.

The industry is afraid of losing market share to Tesla, the dominant electric carmaker, which is growing rapidly. Wall Street values Tesla at about $752 billion, about 10 times as much as G.M. Several start-ups, like Rivian and Lucid Motors, are hoping to follow Tesla’s footsteps this year.

And China’s decision late last year to require that most vehicles sold there be electric by 2035 is also critical because G.M. sells more cars in that country through its joint ventures than in the United States. And Britain, Ireland and the Netherlands have said they will ban sales of new gasoline and diesel cars starting in 2030.

G.M. has been talking about moving to zero-emissions vehicles for about two years. Last March, it unveiled modular battery technology that it said would lower costs. A few months later, G.M. said it could reach a point where electric vehicles cost no more than gasoline-powered ones more quickly than it had previously expected.

Ms. Barra was getting support and input from an unexpected source — the Environmental Defense Fund, which had criticized G.M. in the past. The chief executive had shared a barbecue dinner with the group’s president, Fred Krupp, at a conference in 2015, and by last fall they were in regular contact by phone and email.

“We both had an optimism we could reach common ground,” Mr. Krupp said.

In October, G.M. unveiled a Hummer electric pickup truck, and within a day it had collected enough orders to account for all the trucks G.M. planned to make in the truck’s first year.

“That was another inflection point,” Mr. Parker, the chief sustainability officer, said. “It showed consumers really are very excited about owning electric vehicles.”

Just a few weeks later, Mr. Biden became the president-elect. And by December, G.M. was meeting with his transition team, Mr. Parker said. “Our vision of a zero-emissions future aligns very well with their vision and their goals.”

At the same time, G.M. signed a pledge, known as the Business Ambition for 1.5 Degrees, to combat global warming. By early January, the company was homing in on 2035 as the likely date for the electric transition, Mr. Parker said. On Jan. 12, Ms. Barra appeared at the Consumer Electronics Show and detailed G.M.’s vision of a future with no tailpipe emissions, but gave no specific date.

Mr. Biden was sworn in on Jan. 20, and a week later, G.M. announced the end of the internal combustion engine, the technology that has been at the heart of the company, and one of the world’s largest industries, for decades.

“This is a big thing,” Mr. Krupp said. “It really does send a signal that this is the way things are going, and G.M. is going to play their part in accelerating it.”