“No room for complacency,” Modi says.

By Melina Delkic and Will Dudding

We’re covering fears of coronavirus spread in India as the festival season approaches, a mysterious string of illnesses in U.S. diplomats and spies and deepening ties between Israel and the U.A.E. 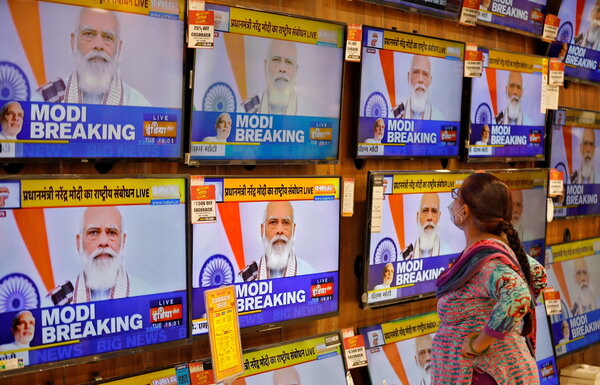 In a televised address, Prime Minister Narendra Modi urged Indians to keep their guard up as more than a billion people get ready to celebrate Diwali and other major holidays. The authorities are worried about the spread of the coronavirus from people packing together.

“Recently, we saw many photos and videos which clearly proved that people have lowered their guard,” he said Tuesday night. “This isn’t right.” He also talked about a future vaccine, which he said the government was working rapidly to produce.

India is rapidly catching up to the U.S. in case count — with almost 7.6 million known cases, compared with 8.2 million in the U.S. In a typical year, the Hindu festival season involves gatherings with friends and family, dance performances, worship and elaborate meals. The pandemic changes that.

Researchers in London are planning to infect volunteers with the coronavirus for a study early next year. They will compare different kinds of vaccines, with the aim of narrowing down candidates.

Ireland became the first European country to reimpose a national lockdown that will begin on Wednesday for a period of six weeks. People will be urged to stay home, and all nonessential shops will be closed.

Chinese vaccines have been administered to 60,000 people in clinical trials around the world, a senior Chinese official said. He said that none had experienced serious adverse reactions.

U.S. officials in China, Cuba and Russia have reported mysterious noises, followed by headaches, dizziness, blurred vision and memory loss. The cause of the strange symptoms is unclear and has led to speculation about secret high-tech weapons and foreign attacks.

Officials say U.S. agencies are concealing the true extent of the episodes. U.S. lawmakers are pressing the State Department to release a study it received in August, which examined potential causes.

Details: The symptoms experienced by diplomats at the American Embassy in Cuba in 2016 and 2017 came to be known as Havana Syndrome. The Trump administration withdrew the diplomats as a result. But lesser known episodes occurred in Guangzhou, China, and in Moscow. One senior C.I.A. officer said he suffered severe vertigo in a Moscow hotel room in 2017 and later developed debilitating migraines that forced him to retire.

From prosecutor to Chinese rights defender

An insider in the Communist Party-controlled legal system, Yang Bin developed a fearsome reputation in the 23 years she spent as a prosecutor in Guangzhou.

Five years ago, she quit to become a defense lawyer. She yearned for the freedom to take on cases without political intervention. Now her work has made her a target of the authorities, who recently revoked her license.

Ms. Yang’s shift embodies the disillusionment of those in the party establishment who have found the space for internal dissent shrinking rapidly amid the worst repression in recent years.

Quotable: “When many people look at the system, they see its strength. When I look at it, I see only its fragility,” Ms. Yang said.

If you have 5 minutes, this is worth it

A ‘lobster war’ in Canada

A battle over the lucrative lobster industry in Nova Scotia has turned violent. Commercial fishermen have burned down buildings and assaulted Indigenous fishermen, accusing them of threatening their livelihoods by trapping lobsters outside the regulated season. Above, a lobster pound that was burned to the ground over the weekend.

The members of the Sipekne’katik First Nation negotiated the right to hunt and fish in a centuries-old treaty and a court has ruled in their favor. The fight over lobster is the latest flash point in a series of abuses of Indigenous people in Canada.

Israel-U.A.E.: Emirati diplomats made their first official trip to Israel since the countries normalized relations in August. They signed pacts deepening their ties, including allowing their citizens to travel from one country to the other more easily. Palestinians, who had counted on Arab solidarity, were frustrated.

Kim Wall’s killer: The Danish inventor convicted of killing the journalist aboard his homemade submarine in Copenhagen in 2017 briefly escaped from prison on Tuesday. He took a staff member hostage, and was arrested a short time later.

Google lawsuit: The U.S. Justice Department filed an antitrust suit against the tech giant, accusing it of maintaining an illegal monopoly over search — the most aggressive move against Google in decades.

U.S. debate: President Donald Trump and former Vice President Joe Biden will face off on Thursday for the last time before the Nov 3. election. This time, their microphones will be muted to avoid interruptions like those that marred the first debate.

Snapshot: Above, U.S. voters lining up to cast ballots in Miami, Florida. A record number of votes have already been cast in the state ahead of the Nov. 3 election.

A modern hanbok: The traditional form of Korean dress is being embraced by K-pop stars and adapted by designers. “The reason why people became interested in hanboks, especially outside Korea, is this growth in soft power as demonstrated by K-pop,” said a professor of textile art and fashion design at Hongik University.

What we’re reading: This Financial Times article about the future of the U.S. and its Constitution. Matthew Anderson, our European culture editor, calls it a “really good” look at “why the U.S. right now is a bit like the late Ottoman Empire.”

Cook: This apple pie from our Food editor Sam Sifton calls for precooking the filling before baking.

Watch: The thriller “Utopia” centers on a wild conspiracy theory about viral epidemics — or not so wild, as it turns out, because the theory proves to be true.

Do: Try high-intensity interval training. Many inactive adults who did preferred intense efforts to gentler workouts.

There’s no reason to be bored. At Home has our full collection of ideas on what to read, cook, watch and do while staying safe at home.

Why swing states are important

The path to the U.S. presidency runs through about a dozen states known as battlegrounds or “swing states.”

Under the Electoral College, the system that governs U.S. presidential elections, the party that wins a state typically receives all of its electoral votes. Most states have clear majorities, either for Democrats or Republicans. But in swing states, the race is close enough that both candidates have a shot at winning.

Because of that, an outsize amount of time is spent campaigning in swing states relative to their populations. And, because the coronavirus pandemic presents new challenges for election officials, a single state’s readiness may determine the outcome.

Each of these states was won by Donald Trump in 2016. Joe Biden is now ahead or effectively tied with Mr. Trump in most polls in all seven.

A shift in suburban politics has made Georgia, which typically aligns with Republicans, less of a long shot for Democrats. The state’s voting machines have malfunctioned in three consecutive elections this year alone.

In Pennsylvania, election officials are staring down possibly the biggest ballot processing backlog in the country, with no means of even touching the ballots until polls open on Nov 3.

That’s it for this briefing. See you next time.

P.S.
• We’re listening to “The Daily.” Our latest episode is about a pivotal U.S. Senate race in North Carolina.
• Here’s our Mini Crossword, and a clue: Hairdo goo (three letters). You can find all our puzzles here.
• Matthew Futterman, one of our sports journalists, appeared on NHK World-Japan to discuss sports in the Covid-19 era.