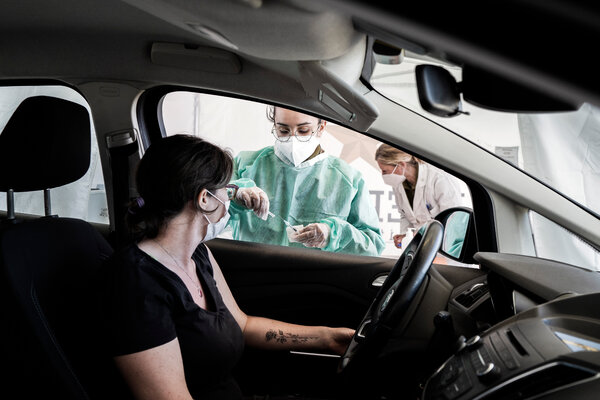 The E.U.’s main drug regulator, the European Medicines Agency, pushed back against doubts about the AstraZeneca Covid-19 vaccine. Emer Cooke, the head of agency, said that regulators were still studying concerns about the possibility of rare side effects, but that there was “no indication that vaccination has caused these conditions” and that the benefits outweighed the risks.

The pausing of use of the AstraZeneca vaccine by major European governments is weakening an already faltering rollout. No country in the E.U. is on pace to reach its goal of vaccinating 70 percent of its population by September.

Thailand, Australia and India are still using the AstraZeneca vaccine as investigations continue into concerns about possible rare side effects like blood clots and abnormal bleeding.

Analysis: The suspensions have as much to do with political considerations as scientific ones. Once Germany hit pause, pressure increased on other governments to follow suit and avoid accusations of being incautious.

President Vladimir Putin of Russia authorized extensive efforts to interfere in the U.S. election to hurt Joe Biden’s chances, including operations to influence people close to Donald Trump, according to a newly declassified intelligence report.

The report did not name Russia’s targets but seemed to refer to Rudolph Giuliani, Mr. Trump’s personal lawyer, who relentlessly pushed allegations of corruption about Mr. Biden and his family involving Ukraine. China considered its own efforts, but concluded that such an operation would fail, the report found.

The U.S. intelligence community also determined that Iran tried to aid Mr. Biden in the final days of the election by spreading emails that falsely claimed to be from the far-right group the Proud Boys. Unlike in 2016, there were no efforts by Russia or other countries to change actual ballots, the report found.

‘I have no money for food’

Across Europe, more students and young people are facing food insecurity as the pandemic enters its second year and job cuts in their families take a widening toll, deepening disparities for the most vulnerable populations.

In France, Europe’s second-largest economy, half of young adults now have limited or uncertain access to food. Nearly a quarter are routinely skipping at least one meal a day, according to le Cercle des Économistes, a French economic research center that advises the government.

“I have no money for food,” said Amandine Chéreau, a French university student whose father was laid off from his job of 20 years in August. By October, she had resorted to eating one meal a day and said she had lost 20 pounds.

Response: President Emmanuel Macron announced a rapid relief plan, including 1 euro meals daily at university cafeterias, psychological support and a review of financial aid for those facing a “lasting and notable decline in family income.”

A year into the pandemic, here’s what public health experts wish the U.S. had done differently.

Moderna is set to begin testing its Covid vaccine in babies and young children, with tests on children ages 12 to 17 already underway.

Chinese embassies in a growing number of countries have begun requiring foreigners entering China to be fully inoculated with a Chinese-made coronavirus vaccine if they want to avoid extensive paperwork.

Anne Lacaton and Jean-Philippe Vassal won the Pritzker Prize, architecture’s highest honor. The French architects are known for creating affordable new spaces by repurposing and reinventing existing structures like the one above.

Prince Philip, 99, left a London hospital on Tuesday after a monthlong convalescence.

The French National Assembly adopted legislation that characterizes sex between adults and minors under 15 as rape, after years of debate and multiple sexual abuse scandals.

Uber said it would reclassify more than 70,000 drivers in Britain as workers; they will receive a minimum wage, vacation pay and access to a pension plan.

As Britain’s ties with Europe weaken, Prime Minister Boris Johnson’s blueprint for the country’s economic, security and diplomatic future is a tighter embrace of Washington.

The U.S. expects more migrants at its southwestern border this year than at any time in the past two decades. The Biden administration, meanwhile, must decide what to do with Donald Trump’s incomplete border wall, above.

Xi Jinping, China’s top leader, has promoted a vision for growth that does not include greenhouse gas emissions, but companies and regions dependent on fossil fuels aren’t making it easy.

On a visit to Tokyo, Secretary of State Antony Blinken and Secretary of Defense Lloyd Austin rebuked what they called “coercion” and “destabilizing actions” by China’s military. Blinken is set to meet with two top Chinese officials on Thursday in Alaska.

Senator Mitch McConnell vowed that Republicans would slow the Senate to a standstill if Democrats changed the filibuster rule. Hours later, Biden said he supported altering the rule to require senators to speak on the floor to block a bill.

America has never taken responsibility for spraying Agent Orange, a herbicide laced with one of the most toxic substances ever created, over Laos during the Vietnam War. But generations of ethnic minorities have endured the consequences. The Times Magazine looked at one of the last untold stories of the American war in Southeast Asia.

Across most of the European Union, vaccine rollout has been slow, and new cases are surging. Europe — the first place where the coronavirus caused widespread death — is facing the prospect of being one of the last places to emerge from its grip.

Why has Europe done so poorly? There are three main reasons.

While the U.S. and other countries rushed to sign agreements with vaccine makers, the E.U. first tried to make sure all 27 of its member countries agreed on how to approach the negotiations.

The result was slower regulatory approval of the vaccines and delayed agreements to buy doses, forcing Europe to wait in line behind countries that moved faster.

Europe put a big emphasis on negotiating a low price for vaccine doses. Israeli officials, by contrast, were willing to pay a premium to receive doses quickly. Israel has paid around $25 per Pfizer dose, and the U.S. pays about $20 per dose. The E.U. pays $15 to $19.

The discounted price became another reason Europe had to wait behind other countries. Even in purely economic terms, the trade-off will probably be a bad one: Each $1 saved per vaccine dose might ultimately add up to $1 billion — a rounding error in a trading bloc with a nearly $20 trillion annual economic output. A single additional lockdown, like the one Italy announced this week, could wipe out any savings.

“Europe is the world’s epicenter of vaccine skepticism,” Jillian Deutsch and Sarah Wheaton of Politico Europe write. That skepticism predated Covid, and now its consequences are becoming clear.

In a survey published in the journal Nature Medicine, residents of 19 countries were asked if they would take a Covid vaccine that had been “proven safe and effective.” In China, 89 percent of people said yes. In the U.S., 75 percent did. The shares were lower across most of Europe: 68 percent in Germany, 65 percent in Sweden, 59 percent in France and 56 percent in Poland.

Celebrate St. Patrick’s Day with malty chocolate stout cake. (Pair it with some reading on an international squabble over the American Irish Historical Society’s mansion on Central Park.)

New surveys over the past year show that the ability to cope improves with age. We looked at why older people managed to stay happier even through the pandemic.

In this moving profile from Time magazine, the actor Elliot Page speaks frankly about his transition and the fight for trans-equality.

That’s it for today’s briefing. Thanks for joining me. — Natasha

The latest episode of “The Daily” is on U.S. conservatives divided over wind energy.

You can reach Natasha and the team at [email protected].