At least two dead in a Vienna shooting.

Today, we’re covering a terror attack in Vienna, the last day before Americans go to the polls and 20 years of the International Space Station. 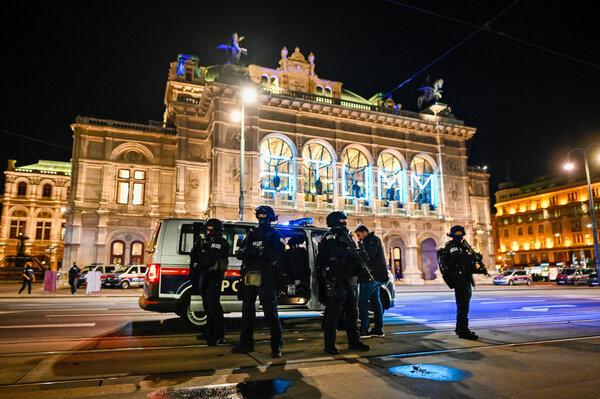 In what officials described as a “terror attack,” multiple gunmen opened fire with automatic weapons in six locations around central Vienna on Monday night, killing at least two people and wounding at least 15 others, including a police officer. At least seven people were seriously injured, according to Vienna’s mayor.

The police shot and killed one attacker, said Sebastian Kurz, Austria’s chancellor, but others remained at large, as of early Tuesday. “We have become the victim of a disgusting terror attack that is still going on,” he said, in a televised address to the nation just before midnight.

The shootings took place hours before the midnight start of a nationwide lockdown, one of several being imposed in Europe to stop the spread of the coronavirus. Follow our live updates here.

The last day before the U.S. election

More than 96 million Americans have already voted ahead of today’s Election Day — making it likely that the total turnout will hit a record. Early voting has brought uncertainty to the presidential campaign.

Backers of President Trump and former Vice President Joe Biden see the split between early voters and Election Day voters as partisan: Democrats in most states have made up a clear majority of early voters, while many Republicans are waiting to show up at the polls today.

In the final stretch, Mr. Trump amped up chaos at his rallies by claiming ballots should not be counted past election night, even though no state reports final results by midnight. Both candidates were focusing on Pennsylvania, which will be crucial.

Tension: The campaign is ending on an unsettling note. The final days have included threats of violent skirmishes and street demonstrations. Store owners in some cities are putting plywood on their windows, anticipating unrest.

The numbers: The polls have showed Mr. Biden in the lead. Our polling reporter outlined what Mr. Trump would need to win — essentially, he writes, a polling error much larger than the one in 2016.

How the W.H.O. bowed to China

On a weekend in February, when the world still hoped the virus could be contained, a World Health Organization team arrived in Beijing to investigate a critical question: How did the coronavirus jump from animals to humans?

Nine months and more than 1.1 million deaths later, there is still no transparent, independent investigation. China did not allow W.H.O. team members to investigate the source or even visit the market where the outbreak began, while W.H.O. leaders, if privately frustrated, have largely ceded control of the inquiry.

Details: Internal documents obtained by The Times and interviews with more than 50 public health officials, scientists and diplomats provide an inside look at the W.H.O.’s dealings with Beijing. China extracted concessions that helped it delay important research and avoid a potentially embarrassing review of the government’s early response to the outbreak.

Quotable: “Unfortunately, this has become a political investigation,” said Wang Linfa, an Australian virologist in Singapore. “Whatever they do is symbolic.”

Chancellor Angela Merkel likened the pandemic to challenges Germany faced after World War II. Residents are entering “lockdown light” for a month, in hopes of celebrating the holidays with their families.

After Australia reported its first 24-hour period of no new cases in nearly five months, one new case was discovered in the state of New South Wales.

Prince William contracted Covid-19 in England in April but kept his diagnosis a secret for fear of alarming the public, according to the British news media.

After abruptly announcing lockdown plans for England, Prime Minister Boris Johnson now faces opprobrium from allies and adversaries alike who say he has either gone too far or acted too slowly. But for all that criticism, his latest plans are unlikely to be derailed.

If you have 6 minutes, this is worth it

Our high-tech home in space

It’s been 20 years since humans began living on the International Space Station. The outpost that orbits Earth about 240 miles above the planet was pitched as post-Cold War space cooperation between the United States and Russia. Japan, European countries and Canada later joined the missions, seen as keys for future economic activity in space.

Our science reporters take stock of the space station’s 20 years. You can take a visual tour, read about key moments and scroll through our timeline.

Afghan attack: Gunmen stormed Kabul University on Monday and laid siege for six hours, killing at least 19 people and wounding more than a dozen others. An Afghan branch of the Islamic State was reported to have claimed responsibility.

Edward Snowden: The whistle-blower and former U.S. intelligence contractor said he was applying for Russian citizenship because he and his wife were expecting their first child.

Turkey earthquake: Days after a 7.0 magnitude quake, a toddler was pulled alive from the rubble of her apartment building in Izmir.

Snapshot: A train that went careening over the end of elevated tracks in Spijkenisse, the Netherlands, on Monday was left teetering about 30 feet above the ground, above. But in an extraordinary fluke, no one was injured or killed in the accident, thanks to a huge plastic sculpture coincidentally named “Saved by the Whale’s Tail.”

Lives Lived: The Texas singer-songwriter Billy Joe Shaver, whose trenchant, vivid compositions were recorded and performed by Willie Nelson, Bobbie Bare, Elvis Presley and Johnny Cash, among many others, died at 81 last week in Texas.

What we’re watching: The polar bear cam at the San Diego Zoo.

Cook: This homemade hamburger helper definitely has a kick, so adjust the hot sauce according to taste.

Read: “The Best of Me,” by David Sedaris, is a must-read, our reviewer writes. “It will be a new experience, knowing that enough time has passed to find humor in the hardest parts of life.”

Do: During stressful times, knitting can bring calm and a sense of connection to the past and to family members far away.

For inspiration on what to read, cook, watch and do while staying at home, take a look at our At Home collection of ideas.

Tomorrow’s briefing will tell you everything you need to know about the U.S. election results, including what we know so far and what’s still to come. But if you can’t wait (and are prepared to sacrifice your sleep for it), here’s what to expect — and when.

While the full count is never completed on election night, it is generally possible to confirm a winner by the end of the night. In 2016, the election was called at about 2:30 a.m. Eastern (7:30 a.m. G.M.T.) after Donald Trump’s victory in Wisconsin. But advance and mail voting could delay a final result in 2020 by hours or even days.

Before results start to roll out, we’ll broadcast our first-ever live edition of “The Daily” podcast at nytimes.com/thedaily and on the New York Times iPhone app from 4 p.m. to 8 p.m. Eastern (9 p.m. to 1 a.m. G.M.T./10 p.m. to 2 a.m. C.E.T.), with interviews with voters and Times correspondents around the country.

Expect the first meaningful results of the night, after polls close in much of Florida and Georgia. North Carolina’s polls close 30 minutes later. If Joe Biden wins any of the three states, he becomes an overwhelming favorite to win the presidency.

For that reason, The Times will be bringing back its famed election needle only for the three states — showing the percentage chance of a Trump or Biden victory in each, based on ballots that have already been counted.

Stay focused on the needles in North Carolina and Florida, where things will be moving quickly, and resist the temptation to look at big leads for Mr. Biden in Texas and Ohio. For both candidates, Florida could be the clincher.

Results from Pennsylvania may come through slowly: State law prohibits election administrators from even opening mail ballots — which represent a third of the overall vote — until Election Day.

By this stage of the night, results may largely be counted in Florida and North Carolina. A Biden verdict in both all but ends the president’s path to re-election. Results in Wisconsin and Minnesota will most likely also come through fairly quickly.

With results continuing to trickle in from states across the country, pundits may be paying particular attention to Pennsylvania and Michigan by this point of the evening. A winner may have been called in North Carolina or Florida, even in a closely fought race.

That’s it for this briefing. Until tomorrow.

P.S.
• We’re listening to “The Daily.” Our latest episode is a guide to election night.
• Here’s our Mini Crossword, and a clue: Poorly behaved (three letters). You can find all our puzzles here.
• The word “strawberryness” — from an article about pricey scratch-and-sniff T-shirts — appeared for the first time in The Times yesterday, as noted by the Twitter bot @NYT_first_said.
• Patrick Kingsley, our correspondent based in Berlin, is our next Jerusalem bureau chief.