We’re covering reopened travel to the U.S. and claims of unfair government tactics in the Russian election. 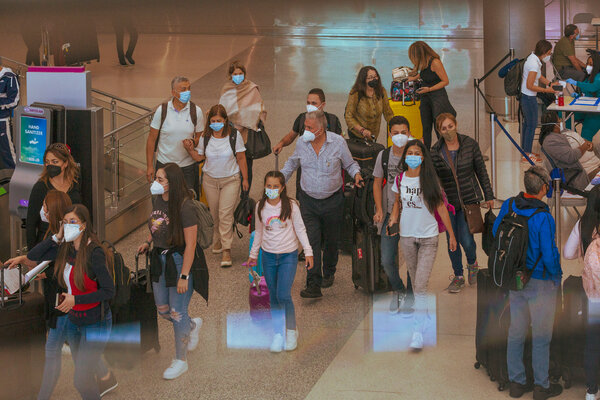 The Biden administration will lift travel restrictions starting in November for foreign residents who are fully vaccinated against the coronavirus.

For more than a year, travelers from certain European countries, Iran, India, China and other countries have largely been barred from entering the U.S. for nonessential travel. Many have voiced frustration over being separated from loved ones, jobs and school while vaccinated Americans have been allowed to travel more widely.

The travelers will have to show proof of vaccination as well as a negative Covid test within three days of their arrival to the U.S., similar to requirements in many other countries. The changes announced on Monday apply only to air travel and do not affect restrictions along the land border.

Officials said unvaccinated Americans returning to the country will be subject to stricter requirements, including testing negative one day before traveling and showing proof they have bought a test to take after landing.

Details: The Centers for Disease Control and Prevention will also soon issue an order directing airlines to collect phone numbers and email addresses of travelers for a new contact-tracing system.

Economic recovery: Tourism officials in New York City welcomed the news. Before the pandemic, visitors to New York City from other countries peaked at 13.5 million a year in 2019. The figure plunged last year to 2.4 million.

The Pfizer-BioNTech vaccine has been shown to be safe and highly effective in children aged 5 to 11 years, the companies announced.

India will resume exports of Covid-19 vaccines, the health minister said, five months after halting shipments during its own devastating wave of infections.

U.S. regulators are expected to authorize a third dose of the Pfizer vaccine for older Americans and those vulnerable to severe Covid-19.

Russia’s ruling party retained a two-thirds majority in the Duma and claimed a sweeping victory in opposition-minded Moscow in a nationwide parliamentary election, despite approval ratings below 30 percent in recent polls. Opposition leaders denounced it as a sham.

Partial results that came out after polls closed on Sunday evening showed significant gains by opposition parties as well as potential victories by several candidates supported by the imprisoned opposition leader Aleksei Navalny.

By the time the election commission revealed a full count on Monday, the gains were largely gone, prompting claims of fraud.

In Moscow, challengers to the ruling party, United Russia, led in several electoral districts before the results of online voting were tabulated, with a delay, on Monday. An official in the Moscow city government explained the delay by pointing to a “decoding” process that took “considerably longer than we had expected.”

U.S. response: A State Department spokesperson said the Russian elections “took place under conditions not conducive to free and fair proceedings.” He added that the government’s use of laws against “extremist” and “undesirable” organizations “prevented the Russian people from exercising their civil and political rights.”

The troubled property giant Evergrande, once China’s most prolific developer, has become the country’s most indebted company, a position that means its default could ripple across the Chinese economy.

The ratings agency Fitch said this month that a default “appears probable.” Moody’s, another ratings agency, said Evergrande was out of cash and time. Stocks slumped around the world Monday as Evergrande and other worries weighed on investors.

The company rode China’s property boom that urbanized large swathes of the country and resulted in nearly three-quarters of household wealth being tied up in housing. Evergrande was at the center of power in an economy that came to lean on the property market for supercharged economic growth.

But regulators in China are cracking down on reckless borrowing habits of property developers. And the property market is slowing down, with less demand for new apartments.

Crisis: Evergrande now owes money to lenders, suppliers and foreign investors. It owes unfinished apartments to home buyers and has racked up more than $300 billion in unpaid bills. And it faces creditor lawsuits.

A U.S. journalist in Myanmar, in custody for 120 days, was ordered to remain in confinement.

Sanae Takaichi, a hard-line conservative, is hoping to be Japan’s first female leader. But she is a divisive figure: She rarely talks about gender equality and supports some policies that feminists say diminish women’s rights.

The former boxing champion Manny Pacquiao joined the presidential race in the Philippines. He holds a seat in the Senate but faces tough opposition as a critic of President Rodrigo Duterte.

Afghanistan’s new government has made it clear that intends to severely restrict education for girls and women despite the Taliban’s claims that schooling will eventually resume.

Polls will close soon in Canada’s election. Many wonder why Prime Minister Justin Trudeau is holding a snap election, two years ahead of schedule, that was meant to capitalize on a moment of strength but has highlighted his weak points. Check here for updates.

The United Nations General Assembly session will commandeer attention with a lineup of leader speeches starting on Tuesday. Here’s a preview.

Paul Rusesabagina, who was portrayed in the movie “Hotel Rwanda,” was found guilty of forming and funding a terrorist group. Human rights advocates denounced the case as a sham meant to silence critics of Rwanda’s president.

As the Afghan war comes to an end, U.S. troops are still deploying to Iraq. Though the mission may have dropped from public attention, there are still about 2,500 American troops on the ground in the other nation the U.S. invaded after the Sept. 11 attacks.

Founded in 1976, the Toronto International Film Festival has a democratic spirit. It is intended for the general public, while festivals like Cannes are by invitation only. “It’s just a flood of movies — good, bad and indifferent,” writes Manohla Dargis, a Times film critic who attended this year’s Toronto festival, which wrapped this weekend.

Highlights included “Flee,” a beautifully animated documentary about an Afghan refugee; “Hold Your Fire,” a jaw-dropper about a decades-old American hostage crisis; Benedict Cumberbatch as a 1920s Montana cowboy in “The Power of the Dog” and as a cat-fancying painter in “The Electrical Life of Louis Wain”; and “Becoming Cousteau,” about the underwater French explorer.

Manohla “wept buckets” over her favorite film from the festival, “The Tsugua Diaries,” which was shot during the pandemic and was very much about it, as well as “friendship and the deep, life-sustaining pleasures of being with other people.”

World Through a Lens

The Japanese American novelist Ruth Ozeki is also a Zen Buddhist priest, which informs her new consumerist parable “The Book of Form and Emptiness.”

That’s it for today’s briefing. See you next time. — Melina

P.S. Amy Fiscus, The Times’s national security editor and a deputy Washington bureau chief, is joining the team at The Morning.

The latest episode of “The Daily” is about one family’s desperate fight against the Dixie Fire in California.

Sanam Yar wrote the Arts and Ideas section. You can reach Melina and the team at [email protected].