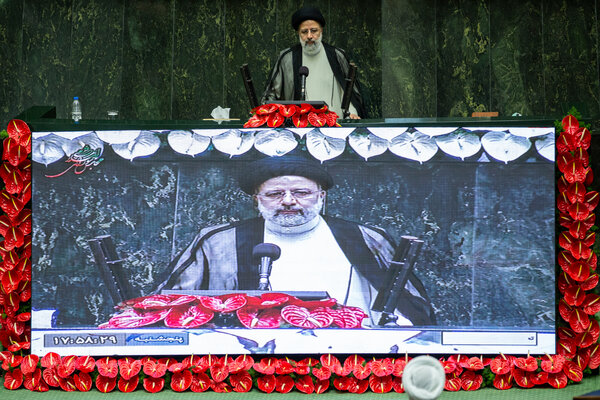 With the inauguration of Ebrahim Raisi as president of Iran, conservatives now control all branches of the Islamic Republic’s government and are set to pursue a harder line in foreign and domestic policies.

Raisi, a former chief of the Iranian judiciary and a protégé of the supreme leader Ayatollah Ali Khamenei, won a low-turnout election that had been orchestrated to prevent any credible opponent from running. He is seen as Khamenei’s choice to succeed him as supreme leader in a system where a small group of Shiite clerics hold the ultimate power.

A list leaked to local media indicates that key posts in Raisi’s cabinet will be offered to men with deep ties to the intelligence and security apparatus. Activists have warned that given his track record in the judiciary, which has jailed and executed dissidents, journalists and lawyers, they expect more state oppression under the new administration.

Quotable: “Raisi’s presidency is very much the rise and dominance of the military and security branch of the Islamic Republic and the retreat of the technocrats and moderate voices,” said Nader Hashemi, the director of the Center for Middle East Studies at the University of Denver.

Context: Iran’s supreme leader is truly supreme, but the president is not a figurehead.

As southern Europe grapples with one of its worst heat waves in decades, deadly forest fires have engulfed stretches of the region.

The raging fires saw beachside tourist destinations across the region abandoned as blazes forced residents out of villages on the Greek islands and mainland, destroyed stretches of forest and homes in Turkey, and led to days of dramatic rescues in Italy. Here’s what it looks like.

Over 100 fires were burning around Greece on Thursday. The largest and most worrying were on the island of Evia and at ancient Olympia, the birthplace of the Olympic Games, where the local authorities and army personnel dug fire lines around the archaeological site to keep the flames at bay.

People in Athens were instructed to remain indoors on Thursday as a thick pall of smoke from the fire to the capital’s north hung over the city.

Turkey: President Recep Tayyip Erdogan is under ferocious attack for his handling of the country’s worst wildfires in decades.

New research suggests that a crucial system of ocean currents, including the Gulf Stream, is faltering.

President Biden has set a target that half of all vehicles sold in the U.S. be electric by 2030, and he restored auto mileage standards that would cut about one-third of the carbon dioxide produced annually by the country.

After almost 18 months of relying on emergency programs to support their economies, governments across Europe are scaling back some measures with the expectation that economic growth will carry the load.

At least half of the 19 countries that use the euro have already sharply curtailed pandemic aid. State-backed job retention schemes, which have cost E.U. countries over €540 billion, are set to end in September in Spain, the Netherlands, Sweden and Ireland. But the Delta variant adds a new wrinkle, prompting concerns about whether this is the time to roll back the assistance.

Swaths of workers risk losing their jobs when support is withdrawn. The hospitality and travel industries are operating at up to 70 percent below prepandemic levels.

In Britain, a furlough program that has saved 12 million jobs now keeps fewer than two million workers on standby support. But after it ends in September, around a quarter of a million people are likely to lose their jobs, the Bank of England has forecast.

U.S.: Friday’s jobs report is the first to come out since many states ended federally funded unemployment insurance benefits. Economists will be looking for changes in the job market.

In other virus news:

A new Russian disinformation campaign appears to be spreading falsehoods in the U.S. about the potential for forced inoculations against Covid-19.

Residents of the microstate of San Marino may be trapped by Italian vaccine passport rules until regulators approve the Russian Sputnik V vaccine used by most of San Marino’s population.

The soccer superstar Lionel Messi will not return to F.C. Barcelona, the only club he has played with since he was 13, the team announced.

Ratings for the Olympics in the U.S. have been a disappointment for NBC, averaging 16.8 million viewers a night through Tuesday, compared with an average of 29 million through the same day in 2016.

Adam Ondra, the world’s top climber, finished out of the medals in the Olympic debut of sport climbing. Eighteen-year-old Alberto Ginés López of Spain won gold.

Two coaches involved in the attempt to force an Olympic athlete home to Belarus against her will have been expelled from the Olympic Village.

Dissatisfied with the government’s handling of the pandemic and the economy, some Tunisians have backed a presidential power grab.

A 9-year-old’s death in Delhi has renewed protests against sexual violence.

President Biden granted special protections to Hong Kong residents in the U.S., offering them a temporary deferral from deportation.

Prospects for a negotiated outcome in Afghanistan appear to be fading.

In Taipei, young people watched as the Hong Kong protests were brutally extinguished. Now they wonder what’s in their future.

Instagram stores that specialize in knickknacks are booming. Blame the pandemic.

For more than a year, a lot of people have been at home, carving out little work-from-home spaces and looking at the same multiple-of-four walls. People have transformed their interior lives in ways big and small. Very small, sometimes: maybe an abalone pen holder ($38), or a turquoise-and-purple teeny-bopper land line phone ($32).

“It’s optimistic and cheerful,” Annie Auchincloss, the home buyer for the MoMA Design store, told my colleague Marisa Meltzer. “But then I also have this theory: It’s these economic, arrested-development millennials who have been hit by a recession and a pandemic and are in this perpetual state of childhood, returning to parents being like, ‘Can you help me?’”

The pandemic brought a new design wave, as aesthetic magpies with a nesting instinct started gathering up shiny things. Young buyers have brought back the wiggly designs of Ettore Sottsass and the Memphis Group. “The clutter-loving British,” writes Mireille Silcoff in The Walrus, “are leading the new maximalist charge,” citing influences like Rita Konig’s “undone” interiors and the youthful style of Beata Heuman. Without the din of an office, we’ve had to let our homes do the talking.

“All the Frequent Troubles of Our Days” is a remarkable work of family history that vividly recreates the anti-Nazi resistance in Germany.

“My Dog Stupid,” the latest film starring Charlotte Gainsbourg and her real-life partner, Yvan Attal, may be their silliest and saddest yet.

Here’s today’s Mini Crossword, and a clue: Food for a sperm whale (5 letters).

That’s it for today’s briefing. Thanks for joining me. — Whet

P.S. The creators of the Emmy-nominated documentary “Framing Britney Spears” talked about the film with The Hollywood Reporter.

The latest episode of “The Daily” is on Andrew Cuomo.

You can reach Whet and the team at [email protected].