We’re covering the discovery of hundreds of unmarked graves of Indigenous children in Canada, and a frightening Covid outbreak in Sydney. 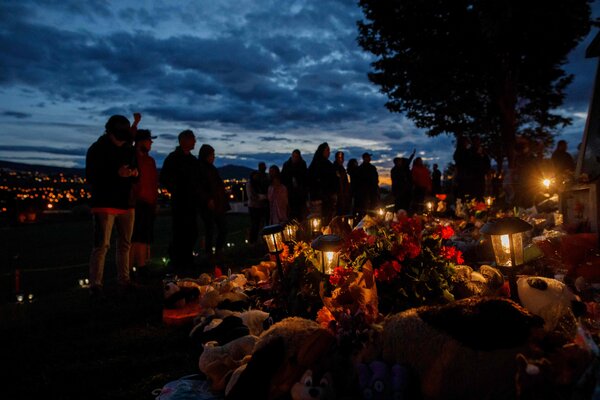 Another discovery of Indigenous children’s remains in Canada

The remains of 761 people, mainly Indigenous children, were discovered at the site of a former school in the province of Saskatchewan, a Canadian Indigenous group said. It was the largest such discovery to date.

Less than a month ago, the remains of 215 children were found in unmarked graves on the grounds of another former boarding school in British Columbia. Many are asking how so many children could have wound up in those burial spaces.

“This was a crime against humanity, an assault on a First Nation people,” Chief Bobby Cameron, of the Federation of Sovereign Indigenous Nations, said during a news conference on Thursday. “The only crime we ever committed as children was being born Indigenous,” he said.

Context: A federal commission in 2015 found that the residential school system meant to forcibly assimilate Indigenous children was a form of “cultural genocide,” where students were abused by clergy and dealt with disease, death and danger.

What’s next: The latest findings are likely to deepen debate in Canada over its history of exploiting Indigenous people and refocus attention on the horrors of the schools, a stain on the history of a country that has often been perceived as a bastion of progressivism and multiculturalism.

Related: The U.S. this week announced that it would search federal boarding schools for possible burial sites of Native American children.

Sydney is hunkering down after a Covid-19 outbreak

A new Covid cluster in Sydney linked to the highly contagious Delta variant has grown to 49 cases, prompting a travel ban for the five million residents of Australia’s largest city.

Mask wearing is once again mandatory after several months of near-zero Covid community transmission. People have been asked to work from home, and gatherings are limited.

Health officials in New South Wales have been scrambling for more than a week to contain the outbreak, which began when a Sydney airport limousine driver tested positive for the Delta variant. He was not vaccinated, in violation of public health guidelines, and is believed to have become infected while transporting a foreign airline crew.

Highly contagious: Some of the cases originate from fleeting contact, with just a few seconds of shared air in a store or cafe. Officials said they expected more cases and challenges to arise.

Quotable: “Since the pandemic has started, this is perhaps the scariest period that New South Wales is going through,” the state premier, Gladys Berejiklian, said.

The International Monetary Fund is working on a plan to issue $650 billion worth of reserve funds that countries could use to buy vaccines, finance health care and pay down debt.

Chancellor Angela Merkel of Germany warned that despite dropping numbers of new coronavirus infections, Europeans should “remain vigilant” and not be deceived into thinking the pandemic is over.

The U.S. plans to send three million doses of the Johnson & Johnson vaccine to Brazil, where deaths are surging and only a third of the population has had one shot.

Britney Spears speaks out about conservatorship

Fellow pop stars and fans responded with shock after Britney Spears went to court and gave her most significant public statement yet on her conservatorship. She pleaded with the court to end her father’s legal control of her life.

Spears told a Los Angeles judge on Wednesday that she had been drugged, compelled to work against her will and prevented from removing her birth control device over the past 13 years.

“I’ve been in denial. I’ve been in shock. I am traumatized,” Spears, 39, said in a 23-minute address by phone that was broadcast in the courtroom. “I just want my life back.”

“I truly believe this conservatorship is abusive. I don’t feel like I can live a full life,” she said. Here’s the full transcript of her statement and key moments.

Reactions: Supporters from across the country gathered outside the courtroom. “The reality is worse than we expected,” one said. Many have called to #FreeBritney for years. Midway through Wednesday’s hearing, the singer Mariah Carey urged her to “stay strong” in a message on social media. Liz Phair wrote that declaring a woman “mad” to gain control of her assets was the “oldest trick in the playbook of the patriarchy.”

The Biden administration is preparing to relocate thousands of Afghan interpreters, drivers and others who worked with American forces to other countries in an effort to keep them safe while they apply for entry to the U.S.

A plan by India to build a digital database for farmers to boost their incomes has raised concerns about privacy and whether poor farmers will be included, Reuters reports.

Search teams waged a desperate rescue effort to find those in the rubble of a high-rise condo building near Miami Beach that collapsed. At least one person died and 99 others were unaccounted for.

The Times visited the scene of a May 16 Israeli airstrike that destroyed three apartment buildings in Gaza and decimated families to find out what happened.

The Japanese government has released a more than 500-page dossier compiled by an official before his suicide that poses tough questions about the style of governance that developed under former Prime Minister Shinzo Abe.

Former President Benigno S. Aquino III of the Philippines, scion of the country’s most prominent pro-democracy political family, has died in Manila at age 61.

In The Times Magazine’s climate issue, the opinion writer Ezra Klein spoke with experts about the limits of politics in facing down the threat of climate change. “We knew how to build rockets, and we knew where the moon was,” one expert said. “We don’t know all the answers of where we’re going.”

A year that changed Hong Kong

Next week marks the first anniversary of the national security law that gave Beijing more control over Hong Kong. Our Morning newsletter talked to Vivian Wang, a correspondent, about how the city has changed.

What’s happened in Hong Kong in the past few months?

A lot has changed, all in line with a general trend: increasingly harsh, and overt, suppression of the rights that made Hong Kong different from mainland China. An annual vigil on June 4, to commemorate the 1989 Tiananmen Square Massacre against pro-democracy protesters in Beijing, was banned.

What does China’s censorship mean for pop culture in Hong Kong?

Hong Kong has historically had a strong film industry, and it’s been trying to turn itself into an arts hub. But with the new rules around movie censorship, and recent attempts to get artwork banned from museums, it’s hard to imagine how the city could keep up the reputation it wants. There are still attempts to keep Hong Kong’s cultural world alive, but the mainland Chinese market is so big that many creators, especially in the corporate world, don’t want to alienate it.

What’s the mood inside the pro-democracy movement?

It’s still bleak. Some people say protesters will come out again when the pandemic fully ends and social distancing rules can’t be used anymore to ban public assembly. But many people I talk to say they are really scared.

This chicken salad with balsamic dressing is a perennial favorite.

A set of three sci-fi indies and a clever rom-com are among this month’s hidden streaming gems.

A generation of thinkers is grappling with what consent means, Parul Sehgal writes.

Here’s today’s Mini Crossword, and a clue: In the loop (five letters).

That’s it for today’s briefing. See you next time. — Melina

The latest episode of “The Daily” is about the struggles of India’s vaccine giant, Serum Institute.

You can reach Melina and the team at [email protected].