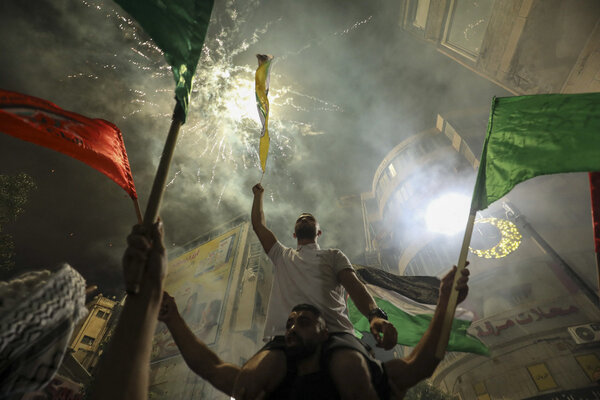 Israel and Hamas agree to a cease-fire

A cease-fire between Israel and Hamas took effect early this morning, hours after both sides agreed to end fighting that has claimed hundreds of lives over more than 10 days. The truce, mediated by Egypt, began at 2 a.m. in Israel — midnight in Britain — as people on both sides watched nervously to see whether it would hold. Here are the latest updates and pictures.

In Israel, Prime Minister Benjamin Netanyahu’s office announced on Thursday evening that his security cabinet had voted unanimously to accept the Egyptian proposal. Officials of Hamas, the militant group that controls Gaza, confirmed that it, too, had accepted. Each side cautioned that its compliance could depend on the other’s actions.

President Biden vowed to marshal international resources to rebuild Gaza, adding, “We will do this in full partnership with the Palestinian Authority — not Hamas, the Authority — in a manner that does not permit Hamas to restock its arsenal.”

The toll: The Israeli campaign has killed more than 230 people in Gaza, many of them civilians and children, and badly damaged infrastructure, including plumbing systems, the electrical grid, hospitals, schools and roads. Rockets fired at Israel from Gaza have killed 12 people.

Diaspora: For some young American Jews, the Gaza conflict has stoked an identity crisis as they confront the region’s longstanding strife in a very different context, with very different pressures, from previous generations.

The BBC apologizes for its Diana interview

An inquiry into the explosive 1995 interview between Princess Diana and the BBC journalist Martin Bashir has found that Mr. Bashir deceived Diana’s brother to obtain the interview by creating fake bank statements to undermine a rival news organization.

“Without justification, the BBC fell short of the high standards of integrity and transparency which are its hallmark,” John Dyson, a former Supreme Court justice, said in the report, conducted at the request of the broadcaster’s current management. The BBC has issued a contrite response and accepted the findings.

In a statement, Mr. Bashir apologized for the falsified statements, but insisted that they “had no bearing whatsoever on the personal choice by Princess Diana to take part in the interview.” That is an assertion the report generally supports, noting that she was eager to do an interview and happy with the outcome.

Context: The BBC has been under pressure from Britain’s Conservative government for its news coverage. The government has threatened to overhaul the compulsory license fee that finances most of its operations. The BBC also faces competition from a fledgling news channel, GB News.

Europe has recorded a 60 percent drop in new coronavirus infections over the past month, the W.H.O. said yesterday, even as a top official warned that “this progress is fragile” and encouraged vigilance.

Earlier this week, E.U. members agreed to reopen their borders to nonessential travelers from countries deemed sufficiently low risk, as well as those who have been fully vaccinated against the coronavirus with an approved shot.

The number of new cases reported weekly across Europe dropped from 1.7 million in mid-April to close to 685,000 last week. Worrisome variants that appeared to be spreading within the bloc remain a concern, particularly as people socialize together more amid easing restrictions.

Quotable: “We are heading in the right direction, but need to keep a watchful eye on a virus that has claimed the lives of nearly 1.2 million people in this region,” said Dr. Hans Kluge, the W.H.O.’s European director. He added, “Vaccines may be a light at the end of the tunnel, but we cannot be blinded by that light.”

The Serum Institute of India will not export vaccines before the end of the year, slowing aid to low-income countries.

A crush of new infections in Taiwan has brought a swift end to more than a year of Covid-free normality.

Some Italians are forgoing vaccinations, worried that their second dose would interrupt sacrosanct summer holidays.

Mobile vaccine units are traveling across the U.S. to find unvaccinated stragglers.

A German military officer, identified only as Franco A., will face trial on charges of plotting far-right terrorism under a fake refugee identity.

Russian officials have initiated legal action against the U.S.-funded Radio Free Europe/Radio Liberty. The fight could have significant implications for press freedoms across the country.

Though FIFA publicly condemned the short-lived European Super League, it had privately held talks for months with the founders about endorsing the breakaway league.

A ransomware cyberattack on Ireland’s health system has paralyzed services there for a week, cutting off access to patient records, delaying Covid-19 testing and forcing cancellations of medical appointments.

Artists in Hong Kong are subtly rendering the 2019 pro-democracy demonstrations, risking crackdowns from the Chinese government. Above, artwork by Siu Wai Hang showing a photograph of the 2019 protests with the faces cut out.

The staying power of North Korea’s nuclear arsenal highlights an uncomfortable truth for President Biden as he prepares to greet President Moon Jae-in of South Korea at the White House today.

The U.S. blocked a Uniqlo shipment in January over concerns that the shirts had been made, in part, by forced labor in the Xinjiang area of China.

As the Ethiopian government continues to fight a war in the northern region of Tigray, where there are widespread accounts of military atrocities, the country is cracking down on press freedom.

Scientists predict another “above normal” hurricane season in the U.S., with as many as 13 to 20 named storms, six to 10 hurricanes and three to five major hurricanes of Category 3 or higher.

As with the market for tiger bones, ivory, pangolin scales and rhino horn, a flourishing illegal global trade exists for plants — and particularly cactuses and other succulents. “Just about every plant you can probably think of is trafficked in some way,” said Eric Jumper, a special agent with the U.S. Fish and Wildlife Service.

That trafficking can take a serious toll: Over 30 percent of the world’s nearly 1,500 cactus species are threatened with extinction.

Riding out the storm

Over the pandemic, many people seeking relief from lockdowns found it on the back of a mountain bike. Thanks to improved bike technology, more trails and growing interest as a high school sport, mountain biking has experienced a meteoric rise in popularity over the past decade.

According to a market research company, sales of front-suspension mountain bikes were up 150 percent last spring; by June, sales of more expensive models grew by 92 percent. The upswing seems likely to continue.

“I mean it when I say that mountain biking saved my life,” said one new rider. “I hadn’t ridden a bicycle since I was a little kid, but there’s something about getting on the trails. I feel like I’m 13 again.”

Pedal-assisted electric bikes, or e-bikes, are also growing in popularity. And they are better exercise than you might expect: One recent study found that riders new to e-cycling could complete their commutes faster and with less effort on e-bikes than standard bicycles, while getting a meaningful workout. (They’re a lot of fun, too.)

Related: Whether you favor roller skates, e-bikes, skateboards or something else entirely, being on wheels can help recapture some childlike joy. And here’s how to tune up your bike after a few months of storage.

Building a kite is a fun craft activity that doubles as a meditative experience.

Corruption and kooky cameo characters are the punchline in “Two Lottery Tickets,” a Romanian buddy comedy.

That’s it for today’s briefing. Have a great weekend. — Natasha

P.S. The Times has a new podcast: “Day X,” a spy story about Germany’s changing identity, and the backlash against it.

The latest episode of “The Daily” is about Joe Biden and Benjamin Netanyahu.

You can reach Natasha and the team at [email protected].