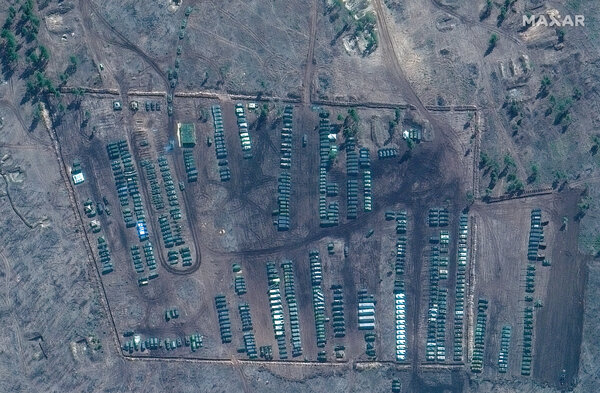 A day after President Vladimir Putin, in an annual state-of-the-nation address, rattled off a list of grievances against Western countries, Russia ordered some of its troops to pull back from the border with Ukraine, easing fears in Europe of a possible war.

Defense Minister Sergei Shoigu, who had called the buildup a test of the Russian military’s readiness, said the units deployed to the border area had shown their capabilities and should return to their regular positions by May 1.

Russia intends to leave some armored vehicles in field camps near the border with Ukraine’s Donbas region. Satellite images have shown hundreds of trucks and tanks in the area.

Response: President Volodymyr Zelensky of Ukraine, who on Tuesday warned his country that war was possible, said he welcomed Russia’s move. He said it would reduce tension.

Related: Russia’s fraying relations with the West took a turn for the worse when the Czech Republic yesterday ordered the expulsion of as many as 60 Russian diplomats over a military-style sabotage attack on a Czech weapons warehouse in 2014.

President Biden announced a plan that would cut U.S. emissions at least in half by 2030, compared to 2005 levels, at a virtual climate summit yesterday. Canada and Japan also put forward new targets for reducing planet-warming gases.

Neither China nor India ramped up their climate goals. But China’s leader, Xi Jinping, said that his country — currently the world’s biggest greenhouse gas polluter — would “strictly limit increasing coal consumption” in the next five years, and would phase it down in the following five years, as part of its plan to reach net carbon neutrality by 2060.

Prime Minister Justin Trudeau pledged that, by 2030, Canada would reduce its greenhouse gas emissions by 40 to 45 percent from 2005 levels. Canada is the only Group of 7 nation whose emissions have increased since the Paris Agreement.

Deforestation action: Britain, Norway and the U.S. vowed to join forces with some of the world’s biggest companies to raise more than $1 billion for countries that can show they are lowering emissions by protecting critical tropical forests.

You’re on mute: The virtual summit proved that even the world’s most powerful people are not immune to Zoom-induced glitches.

More on the climate:

How do U.S. climate goals stack up globally?

Addressing world leaders at the start of the summit, Mr. Biden said the planet was at “a moment of peril, but also a moment of extraordinary possibilities.”

India set a global record for new coronavirus infections as its outbreak continued to soar, amid reports of superspreader gatherings and oxygen shortages. More than 310,000 new infections were reported on Thursday, the most in any country on a single day, and experts warned that the cases and deaths might be undercounted.

The picture is staggeringly different from early February, when India was recording an average of 11,000 cases a day.

Vaccines: More than 132 million Indians have received at least one dose, but supplies are running low, and experts warn that the country is unlikely to meet its goal of inoculating 300 million people by the summer.

The C.D.C. will meet today to discuss whether to lift, extend or modify the pause on the Johnson & Johnson vaccine in the U.S.

South Africa will resume the use of the Johnson & Johnson vaccine to inoculate health care workers next week.

The E.U. will not order the extra 100 million vaccines from AstraZeneca foreseen in its contract, underscoring the soured relationship between the pharmaceutical company and the bloc.

Rebels in Chad, who killed President Idriss Deby, above, on Monday, first amassed the requisite weapons, money and battlefield experience fighting across the border in Libya.

Even as violence escalates in Afghanistan, President Biden is bringing American troops home after nearly 20 years of war. Here’s what you need to know.

High-profile business leaders in China, like Jack Ma, are lying low for fear of being detained, sidelined or silenced as the Communist Party moves forcefully to keep companies in line.

All but two of the 18 people arrested by Jordanian officials earlier this month were released yesterday. They had been accused of aiding a former crown prince in fomenting unrest.

Between 45,000 and 54,000 people from Africa and Asia who died during World War I in the service of the British Empire were not properly commemorated, partly because of prejudice and racism, a new report has revealed.

Inside the Super League’s downfall: For 48 hours, soccer stood on the brink.

President Biden plans to raise taxes on the rich to fund universal prekindergarten, child care, a national paid leave program for workers and free community college tuition. He will also seek to extend a tax credit for parents through 2025.

Taiwan offers marriage leave to newlyweds. One couple, looking for extra days off, had four weddings and three divorces in rapid succession.

Vikki Dougan, above, was a model and an occasional actress whose toned, taut and impossibly shapely back made her, for one whirlwind year, a star. But after interest in her fetching backside waned, Ms. Dougan’s contract was not renewed, and the starlet seemed to disappear from Hollywood as quickly as she had arrived.

Now social media is here to rectify this injustice. “Maybe I’m having a resurgence,” she said from her home in a rent-controlled apartment building for older adults in Beverly Hills.

After an awards season of largely virtual events, the Academy Awards are returning on Sunday with a red carpet and an in-person ceremony. Watch some of the nominated films using this streaming guide. And movie buffs can test their knowledge of Oscars trivia or fill out a 2021 ballot.

Here’s what to watch out for (and our critic’s predictions.)

More diversity. This year’s Oscar nominations are the most diverse ever, with 70 women nominated in 76 categories and nearly half of the acting nominations going to people of color.

A historic directing prize? Chloé Zhao — the front-runner, who directed “Nomadland” — could become the first woman of color to be named best director, as well as the second woman ever. (The first was Kathryn Bigelow for “The Hurt Locker” in 2010.)

A posthumous honor? Chadwick Boseman, who died last year, is up for best actor for “Ma Rainey’s Black Bottom.” In his prediction roundup, The Times’s Kyle Buchanan writes, “It’s hard to imagine voters won’t seize their only opportunity to give one to Boseman for a flashy role that showcased the late actor’s immense range.”

Beef Bourguignon is a beloved French stew, best made a day ahead. It’s among the gastronomic delights, adapted for life in orbit, that the French astronaut Thomas Pesquet will enjoy during his six-month stay on the International Space Station.

What to Listen to

The British singer Marianne Faithfull, 74, will next week release the album she has long dreamed of: a spoken-word tribute to the Romantic poets.

First written in Italian and translated into English, Jhumpa Lahiri’s latest novel, “Whereabouts,” is an unusual literary and linguistic feat.

For other reading inspiration, peruse the shortlist for the International Booker Prize, arguably the world’s most significant award for literature translated into English.

That’s it for today’s briefing. Have an excellent weekend. — Natasha

The latest episode of “The Daily” is about why a gun law failed to prevent an Indiana mass shooting.

Sanam Yar contributed reporting. You can reach Natasha and the team at [email protected].