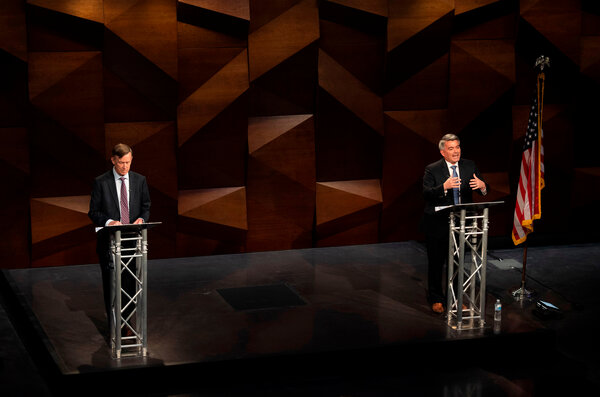 If Joe Biden wins next month, there are two very different scenarios for his presidency.

In one, Republicans have held Senate control, and Biden will have limited ability to pass legislation. In the other, Democrats have retaken the Senate, and Biden can enact an ambitious agenda — fighting climate change, enacting universal pre-K, raising taxes on the rich and expanding both health insurance and voting rights.

Given the stakes, I want to give you a brief guide to the Senate elections. For each, I’ve included a link to a story, often from local media, that offers a portrait of the campaign.

The basics: Fourteen of this year’s Senate races look competitive (with 12 of those 14 seats currently held by Republicans). Democrats need to win at least five of the 14 to retake a Senate majority. They lead in six, polls show.

The next tier. Democrats’ leads in four other states are smaller. In Michigan, Gary Peters, the white Democratic incumbent, is struggling to hold off John James, a Black veteran and businessman.

In Iowa, Maine and North Carolina, Republican incumbents are behind, largely because of Trump’s unpopularity. The biggest name is Susan Collins, the fourth-term Maine senator who is worried enough that she has gone “aggressively negative,” as Slate reports, against her challenger, Sara Gideon.

In North Carolina, adultery revelations don’t appear to have reduced the lead of Cal Cunningham, the Democratic challenger. His opponent, Senator Thom Tillis, is recovering from a case of the coronavirus he evidently caught at the White House.

The longer shots. If two of those six races slip away, Democrats would need at least one win in a state where they do not lead now.

In South Carolina, Jaime Harrison, the Democrat, is slightly behind Lindsey Graham, the Republican Trump-critic-turned-ally. (The Times has a story on that race.) In Alaska and Kansas, the polling has been light enough — and close enough — that upsets seem possible. The same is true in Montana, where Steve Bullock, the Democratic governor, is running against Steve Daines, the incumbent and an enthusiastic Trump backer.

Georgia has the distinction of holding two Senate races this year: the Republican David Perdue’s re-election race against Jon Ossoff; and a special election, because Johnny Isakson retired early, with health problems.

In Texas and Alabama, Republicans have sizable leads. (And in Kentucky, Mitch McConnell’s lead is big enough that most analysts don’t consider the race competitive.)

The big picture. The most important factor is the national environment. If Biden wins the popular vote by at least six or seven percentage points, Democrats will be favored to retake the Senate, The Times’s Nate Cohn told me. Biden now leads by 10 points.

The Supreme Court allowed the Trump administration to end the census count early. The move could lead to undercounting of undocumented immigrants, which would generally benefit Republicans in the drawing of political districts.

Trump again asked the Supreme Court to block a subpoena for his tax records.

Barrett declined to endorse a peaceful transfer of power, saying it was “a political controversy” she wanted to avoid. The Times previews today’s hearing here.

The drugmaker Eli Lilly paused its clinical trial for a coronavirus antibody treatment because of a “potential safety concern.”

The case of a 25-year-old man in Nevada who contracted the coronavirus twice has stoked fears about reinfection. Those cases seem to be very rare.

Before the pandemic struck, Congress was close to a solution banning surprise bills for hospital patients, like $52,112 for an air ambulance ride. Then private-equity firms, which own many medical providers, intervened with millions of dollars of ads — and Congress did not act.

Early voting began in Texas with long lines at the polls, a result of increased turnout, a new ballot design and problems with voting machines.

The fight over absentee ballots is intensifying around drop boxes, with Democrats pushing to expand their use and Republicans trying to limit them through state orders or lawsuits.

In the past two weeks, more than 500 Armenian soldiers have died, along with scores of civilians and an unknown number of Azerbaijanis, in a battle over the disputed territory of Nagorno-Karabakh.

The Justice Department sued a former aide to Melania Trump who wrote a tell-all book, saying the author had violated a nondisclosure agreement.

Last month, U.S. marshals fatally shot a man they suspected was responsible for killing a right-wing protester in Portland, Ore. The Times’s visual investigation team reconstructed the shooting and found that it did not match the official account.

Princeton University has agreed to pay more than $1 million in back wages to female professors after a review found disparities in compensation.

Apple introduced the iPhone 12, but the faster internet speeds it promises may take years to develop, our tech writer Brian X. Chen says.

A morning read: After a 7-month wait in Peru, Jesse Katayama, a tourist from Japan, was able to complete the journey of a lifetime, writing on Instagram: “After the lockdown, the first man to visit Machu Picchu is meeeeeee!”

Lives Lived: She first achieved acclaim on the stage. But she was best known for her Emmy-nominated role as Berta, Charlie Sheen’s gruff housekeeper, on the hit sitcom “Two and a Half Men.” Conchata Ferrell has died at 77.

I know that some readers are skeptical of any government statistics from China, because the country has a history of playing with its economic data. Yet all indications are that China has been legitimately successful in controlling the coronavirus, after its initial failure to do so late last year and early this year.

How has China succeeded? Its authoritarian government implemented strict lockdowns early this year, including the of use of surveillance drones to make sure people stayed inside.

But the success isn’t only about autocracy. China has closely tracked any new cases and has begun treating newly infected people before they can spread the virus further — a step that the U.S. has notably failed to take. China has also benefited from having relatively few old people live in nursing homes, where deadly outbreaks have occurred in other countries, according to The Lancet, a medical journal.

Finally, many people in China took this pandemic seriously from the beginning, because of their experience with the 2002 SARS outbreak. “Other countries do not have such fresh memories of a pandemic,” Xi Chen, a professor at the Yale School of Public Health, told The Lancet.

There are few things as autumnal as squash. This pasta bake makes the best of the butternut variety, gets some kick from jalapeños and comes together in under an hour.

The Oscars postponed next year’s ceremony by two months and extended its eligibility window. Still, highly anticipated contenders like Steven Spielberg’s “West Side Story” are out of the running because of delayed release dates.

Some people have made the case for canceling the Oscars. In The Los Angeles Times, Glenn Whipp argues for going ahead with the awards. Among the worthy contenders, he says: Spike Lee’s Vietnam War epic “Da 5 Bloods” and “Minari,” a Sundance favorite about the family of a young Korean-American boy.

As the personal assistant to the designer Marc Jacobs, Nick Newbold has had many roles. He is also a personal photographer and documentarian, shooting a 28-minute film about Jacobs’s life during the pandemic.

He walks the dogs, orders food and runs errands, yes, but he also oversees his boss’s art collection and sits in on corporate meetings. He joins Jacobs and his husband on vacation — he even officiated their wedding. And his path from growing up in Pennsylvania with no fashion world connections to the nexus of its influence was remarkably aimless. In Newbold’s words, “I don’t have goals.”

Take a tour through the sprawling live-in gaming compound of FaZe Clan, an esports conglomerate.

The late-night hosts responded to Trump’s first rally since his Covid-19 diagnosis.

You can find all of our puzzles here.

P.S. A haiku from a recent Times article (courtesy of the Twitter bot @nythaikus): “Almost all of us/are on hold right now, in one/way or another.”

Today’s episode of “The Daily” is about the confirmation hearings for Amy Coney Barrett.

Lalena Fisher, Ian Prasad Philbrick, Sanam Yar and Claire Moses contributed to The Morning. You can reach the team at [email protected].