Good morning. Today’s newsletter is a special edition, focused on Justice Ruth Bader Ginsburg, the Supreme Court and what happens now. At the bottom, you’ll find shorter versions of the newsletter’s usual sections. 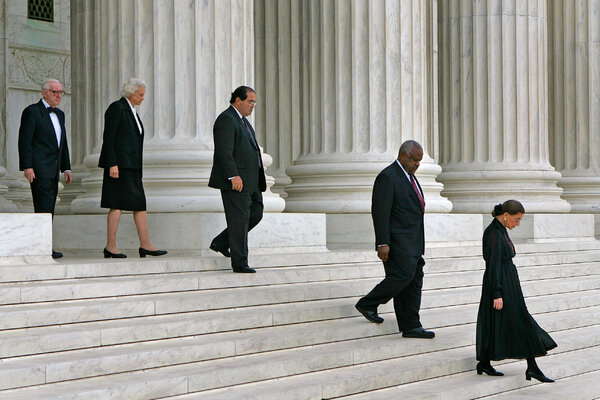 In the final decades of the 20th century, liberals and conservatives each had their own problem that kept their preferred judges from dominating the Supreme Court.

For conservatives, it was the unreliability of the justices appointed by Republican presidents. Some turned into relative moderates (Sandra Day O’Connor and Anthony Kennedy), while others drifted further left (David Souter, John Paul Stevens and Harry Blackmun).

For liberals, the problem was the mishandling of Supreme Court transitions, through the occasional surrendering of a seat so that a Republican president could fill it.

In 1968, the last year of Lyndon Johnson’s presidency, he appointed a personal friend to replace the departing chief justice — and when the nomination floundered on ethical grounds, the seat remained available for the next president, Richard Nixon, to fill. Later, two other liberal justices — Hugo Black, in 1971, and Thurgood Marshall, in 1991 — retired under Republican presidents and were each replaced by a conservative justice. Marshall’s replacement, Clarence Thomas, is still on the court today.

The death of Ruth Bader Ginsburg — like Marshall, a civil rights giant, who demanded that the United States live up to its ideals — has created the fourth time in the last six decades that liberals may turn over a seat to conservatives. Aware of this possibility, some legal scholars and writers pleaded with Ginsburg to retire while Barack Obama was president and Democrats still controlled the Senate, but she wanted to remain on the court.

President Trump and a Republican-controlled Senate now have the opportunity to place a sixth conservative member on the nine-member court. The new justice would likely be a young one who could remain there for decades, potentially helping overturn Obamacare and Roe v. Wade, outlaw affirmative action and throw out climate legislation.

The bungled Supreme Court transitions by liberals obviously aren’t the only reason that conservatives control the court. The unpredictable timing of death plays a role. So did Senator Mitch McConnell’s unprecedented refusal to allow Obama to appoint a justice following the 2016 death of Antonin Scalia. The Electoral College’s bias toward Republicans — allowing Trump and George W. Bush to become president despite losing the popular vote — matters, too.

Yet the flipping of seats from one ideology to another has been crucial. The effect of each instance can last for decades, well beyond any individual justice’s tenure, because each one can try to time his or her retirement to line up with the tenure of an ideologically similar president.

Earl Warren, the liberal chief justice for most of the 1950s and ’60s, understood this and deliberately announced his retirement in 1968, knowing he did not have long to serve on the court and fearing that Nixon would win election later that year. After Johnson failed to replace Warren, that’s precisely what happened.

If Trump replaces Ginsburg, the effect could be similarly long-lasting. The political battles of the next few months — both the court fight and the election — are about as consequential as American politics get.

Much of her impact occurred even before she joined the Supreme Court in 1993, at age 60. She spent years as a lawyer who argued before it and other federal courts. “As a lawyer, she used the court to make the 14th Amendment of the Constitution — in which the founders guarantee equal protection under the law for all citizens — apply to gender, a novel but necessary interpretation,” Errin Haines of The 19th wrote.

She was an evocative writer and a sharp editor. One of her former clerks, Gillian Metzger, said, “When I’m writing, I will often have the experience of I’ll write a sentence, and I’ll look at it, and I’ll think, ‘No the justice wouldn’t let me get away with that one.’”

Ginsburg and her husband, Martin, modeled a marriage of equality to many people who knew them — and took a deep interest in their clerks’ lives. Joe Palmore, one of those former clerks, recalled the time the justice accompanied him on a surprise visit to a day care center when he was struggling to find one for his child.

She loved opera, theater and art, and enjoyed a close friendship with Justice Antonin Scalia, her frequent opponent on the court.

If you haven’t yet read Linda Greenhouse’s obituary of Ginsburg, we recommend it. And CNN reviewed Ginsburg’s notable dissents and opinions.

Trump says he will nominate a replacement for Ginsburg this week, and McConnell, the Senate Republican leader, has promised to hold a vote. Democrats will not have an easy time preventing confirmation: Because there are 53 Republican senators, four would need to defect.

Two have moved in that direction. Senators Lisa Murkowski of Alaska and Susan Collins of Maine have both announced that they would not support confirming a nominee to replace Ginsburg before Election Day. (Murkowski left open the possibility that she could vote to confirm Trump’s pick in the lame-duck period between the election and inauguration.)

One other glimmer of hope for Democrats: The Senate election in Arizona this year is a special election to replace John McCain, who died in 2018. If Mark Kelly, the Democratic nominee, wins, he could take office as soon as Nov. 30, adding reason for Senate Republicans to act quickly.

Joe Biden’s campaign signaled that it would cast the nomination battle as a fight mostly over health care — an issue that favors Democrats, polls show — rather than divisive social issues like abortion. “Health care in this country hangs in the balance before the court,” Biden said yesterday, referring to an upcoming case that could overturn Obamacare.

Other perspectives on the political implications:

In The Atlantic, Anne Applebaum urged Democrats not to focus too much campaign attention on the court. “Americans who define themselves as ‘pro-life’ or as socially conservative might consider voting for Joe Biden if the issue at stake is the botched pandemic response.” (The Times also looks at the newly salient politics of abortion.)

Maeve Reston, CNN: “By taking some of the focus off of Trump’s missteps, her death could reframe an election year debate that has focused primarily on the coronavirus pandemic and the resulting economic crash that cast millions of Americans from their jobs.”

Howard Wolfson, a Democratic strategist: “The prospect of President Trump replacing Justice Ginsburg with a nominee who would surely provide the decisive vote to overturn Roe v. Wade will both galvanize the Democratic base and move swing suburban voters to Democratic candidates …. [It] will be Ruth Bader Ginsburg’s final legacy.”

The United States will soon pass 200,000 confirmed coronavirus deaths, and the global toll is nearing one million. New cases are rising in at least 73 countries, including surges in India and Europe.

Authorities detained a woman suspected of previously mailing the poison ricin to the White House as she tried to enter the United States over the weekend from Canada.

A federal judge on Sunday halted Trump’s executive order effectively banning the Chinese social media app WeChat from operating in the U.S., which had been set to go into effect overnight.

Major banks helped suspected terrorists, drug dealers and corrupt officials move trillions of dollars around the world, despite the banks’ concerns about the suspicious nature of the transactions, according to a new report by BuzzFeed News.

The Times’s visual investigations team reconstructed an Oregon wildfire that quickly grew out of control and destroyed more than 2,000 homes.

Lives Lived: Henrietta Boggs left her native Alabama in 1940 and found revolution in Costa Rica, where she helped secure the right to vote for women and minorities. When she returned, she volunteered to drive protesters in support of the Montgomery bus boycott. Boggs was born during the 1918 influenza pandemic, and died this month of the coronavirus. She was 102.

This minimalist recipe for winter squash with seared cod is equal measures comforting and healthy. Generous pats of butter or oil turn the roasted slices of squash into something wonderful, and the dish comes together quickly.

The Canadian sitcom “Schitt’s Creek” became the first show in Emmys history to sweep the comedy categories, while HBO’s “Succession” won best drama. In one of the night’s surprises, Zendaya, 24, became the youngest person to win best actress in a drama for her role in HBO’s “Euphoria.” Here’s a full list of winners.

You can find all of our puzzles here.

Today’s episode of “The Daily” is about the death of Ruth Bader Ginsburg.

Ian Prasad Philbrick and Sanam Yar contributed to The Morning. You can reach the team at [email protected].