Here’s what you need to know at the end of the day.

By Carole Landry and Hiroko Masuike

(Want to get this briefing by email? Here’s the sign-up.) 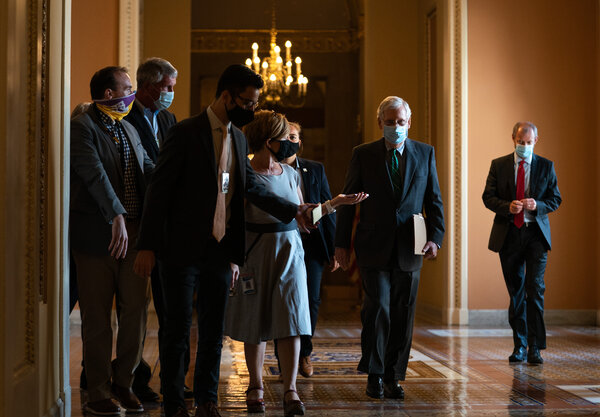 1. The Senate will vote this week on a scaled-back stimulus plan, Senator Mitch McConnell, the majority leader, announced as senators returned to Washington today.

Democrats are likely to block it. The Republican-drafted measure would revive lapsed unemployment benefits at $300 a week — half their previous level — and provide $105 billion for schools as well as funds for coronavirus testing and the Postal Service. Above, Mr. McConnell with reporters as he walked to the Senate chambers.

The plan is an attempt to intensify pressure on Democratic leaders, who want to fully restore the $600 weekly unemployment benefit along with other spending increases. Speaker Nancy Pelosi and Senator Chuck Schumer, the minority leader, said the proposal was “laden with poison pills Republicans know Democrats would never support.”

In California, helicopters battling smoky skies have rescued more than 360 people as a fire burned the Sierra National Forest. California’s largest electricity provider has cut power to 170,000 of its customers to prevent wildfires. Above, evacuees being flown to safety.

Fires in Oregon that have burned through more than 27,000 acres were approaching more densely populated areas, while in Washington State, 80 percent of homes and structures in Malden, a town of 200, was destroyed by fire. Follow our wildfires live updates. These images capture the devastation.

In Colorado, 101-degree weather on Monday gave way to a rapid cold front. Snow was falling in Denver on Tuesday morning.

3. On the first day of school, online classes started (and some quickly stopped).

A ransomware attack forced Hartford, Conn., to call off classes. A website crash left Houston’s 200,000 students staring at error messages. And a software outage in Virginia Beach disrupted the first hours of the school year.