Home » Analysis & Comment » Opinion | With Six Weeks to the Election, Six Ways to Protect It

The 2020 election is underway. Not just the campaign — the actual voting has already begun. States are recruiting and training poll workers, identifying the final list of polling places and early voting locations and mailing out ballots. The pandemic presents a huge challenge, but we can still ensure a safe and accessible vote this November. Here are six ways to make that happen.

1. Every voter must make a plan to vote. Now.

Voters should start by checking their registrations by going to canivote.org. They should find out whether they can vote early, but in-person — that option will ease the burden of counting ballots on Election Day, since most states don’t allow for the early counting of absentee ballots. If they plan to go to the polls on Election Day, they should try to go in the middle of the day, when lines are less likely.

If they plan to vote by mail and live in a state that is not mailing ballots to every voter, they should apply for absentee ballots as soon as possible. Then they must decide how to return that ballot — by mail, in a drop box, at a county office, or at a polling place — and track their ballots if their state provides a website to do so.

In most years, absentee voters wait until the last minute to return their ballots, resulting in a backlog as Election Day approaches. Because 2020 may see three times more mail ballots cast than in any previous election, this backlog threatens to become gridlock. To avoid that, we need to “flatten the absentee ballot curve,” as our colleague Richard Hasen says. Voters should return their ballots as soon as they can. This will help ensure that a rush of ballots does not hit election offices at the last minute — or even worse, too late to be counted. 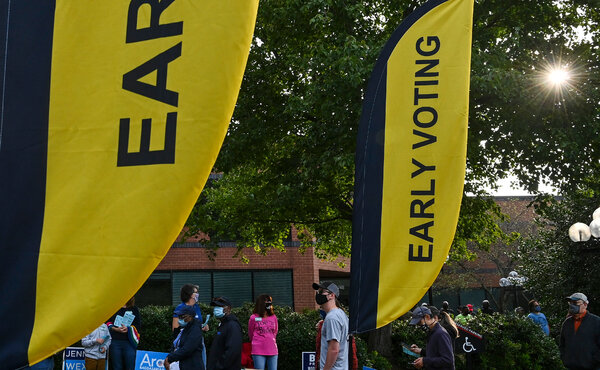 In surveys of battleground states by our organization, healthyelections.org, well over half of respondents indicate they will vote in person this year. We should remove any pandemic-related obstacles from their path.

Local election officials need poll workers, because their usual corps of senior citizens are less likely to serve, given their heightened Covid-19 risk. The job requires long hours, but this year, to sweeten the deal, many local jurisdictions are offering hazard pay. Poll workers need training, so the time to sign up is now. Anyone interested should contact their state election office for information or go to the websites of the National Association of Secretaries of State, the U.S. Election Assistance Commission, and Power the Polls. Ohio has developed a helpful dashboard describing the poll worker shortages in each county — something every state should provide so outside groups can focus their recruitment efforts.

3. Keep watch over the post office, but rebuild confidence in the mail.

Voters’ confidence in the postal system must be restored. The long-term financial woes of the U.S. Postal Service, coupled with decisions this year to cut overtime for postal workers, remove certain equipment and eliminate extra trips to deliver the mail have magnified concerns that the Postal Service was not up to the task in the election. The Postal Service has warned that it cannot meet certain state mail ballot deadlines, meaning last-minute voters risk not having their votes counted.

A federal court in Washington State has now ordered the Postal Service to undo some of its moves and enjoined them from making more. The postmaster general, Louis DeJoy, also backtracked from these changes in his congressional testimony. However, the damage to public confidence may already have occurred; 43 percent of likely voters in a recent Citizen Data poll are not confident that the post office will properly deliver mail ballots.

Voters need to know that mail-in ballots are a small fraction of all mail, and that the postal system remains a secure method for returning ballots. To rebuild confidence, states need to change their laws now to allow local election officials to begin validating mail-in ballots as soon as they are received. Florida, for example, begins to process absentee ballots over three weeks before Election Day. And the Michigan and Pennsylvania legislatures are considering proposals to do so. Counting can still wait until Election Day.

4. Voters need other ways to return their mail ballots.

Given the stress on the Postal Service, states and localities must provide other ways for the return of absentee ballots. In vote-by-mail states such as Washington, roughly half of voters return their “mail” ballot through some method other than the Postal Service — usually hand-delivering them to local election offices or depositing them in ballot drop boxes.

It may already be too late for jurisdictions to acquire additional drop boxes. The Election Assistance Commission suggests these drop boxes (which cost $6,000 a piece) require at least four months to purchase, site and place. But most states allow voters to hand-deliver their mail ballot to their county election office. Some allow dropoff at Election Day polling places or early voting sites. These options should be widely publicized by states and counties. Facebook’s voting information center and Google’s election hub will publicize the locations where voters can drop off their absentee ballots.

5. If a group is trying to help, coordinate with the election officials who run the show.

Some types of “help” provided to voters are counterproductive. We have seen reports of partially filled out applications for absentee ballots being sent to voters, sometimes with the wrong information, or of applications being sent out with explicitly partisan messages. The Postal Service didn’t help with its recent mailer to voters giving advice about voting, sent out without consulting election officials. These tactics needlessly add to the workloads of local election officials, who have to field phone calls from people asking, for example, why their dead husband or pet received an absentee ballot application. They also may reduce voters’ confidence that the election is being administered carefully and fairly.

6. A massive public education effort should that ensure voters know how to cast their ballots.

In the research on election administration at healthyelections.org, we find disturbing trends from the primary elections. Hundreds of thousands of voters had their votes disqualified because of signature mismatches, missing signatures, and, in particular, late delivery. First-time voters, who make up a disproportionate fraction of the presidential electorate, were much more likely in some states to have their votes go uncounted.

To shrink the anticipated number of disputed ballots, and ward off disinformation, the country needs to embark on an unprecedented public education campaign. Election officials are working hard to get the word out about how to successfully complete a ballot. But the scope of the task, short deadlines, and tight budgets mean that election administrators can’t do this alone. Facebook’s announcement that it will provide state-specific “how to vote by mail” videos will provide much needed information, as does Stephen Colbert’s new series of how-to-vote YouTube videos at www.betterknowaballot.com. We need the campaigns, the leaders with big followings and civil society to point voters to the correct information on all the different ways to vote this November and why each mode is safe and secure.

Nathaniel Persily, a law professor at Stanford, and Charles Stewart II, a political science professor at M.I.T, run the Stanford-MIT Healthy Elections Project, which helps ensure that the 2020 election can proceed with integrity, safety and equal access.