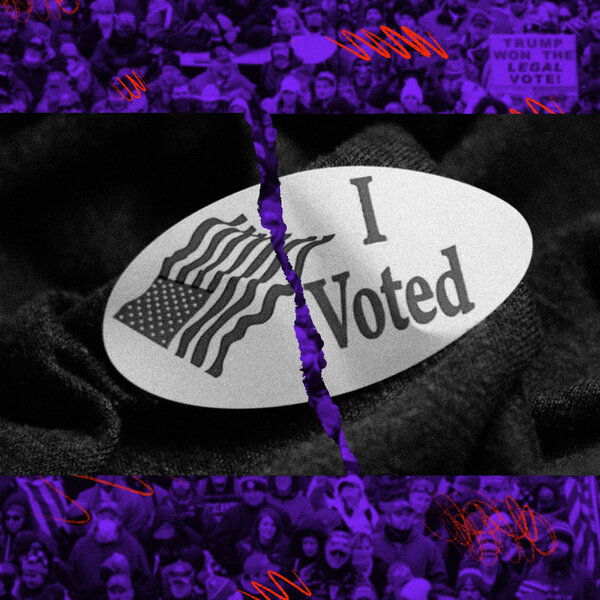 Mr. Bokat-Lindell is a staff editor.

This article is part of the Debatable newsletter. You can sign up here to receive it on Tuesdays and Thursdays.

Nearly nine months after rioters stormed the U.S. Capitol to stop the certification of the 2020 presidential election, a question still lingers over how to place it in history: Were the events of Jan. 6 the doomed conclusion of an unusually anti-democratic moment in American political life, or a preview of where the country is still heading?

Richard L. Hasen, a professor at the University of California, Irvine, School of Law and an expert in election law, believes the second possibility shouldn’t be ruled out. In a paper published this month, he wrote that “The United States faces a serious risk that the 2024 presidential election, and other future U.S. elections, will not be conducted fairly, and that the candidates taking office will not reflect the free choices made by eligible voters under previously announced election rules.”

It could be a bloodless coup, he warns, executed not by rioters with nooses but “lawyers in fine suits”: Between January and June, Republican-controlled legislatures passed 24 laws across 14 states to increase their control over how elections are run, stripping secretaries of state of their power and making it easier to overturn results.

How much danger is American democracy really in, and what can be done to safeguard it? Here’s what people are saying.

How democracy could collapse in 2024

In Hasen’s view, there are three mechanisms by which the 2024 election could be overturned:

State legislatures, purporting to exercise the authority of either the Constitution or an 1887 federal law called the Electoral Count Act, swapping in their own slate of electors for president, potentially with the blessing of a conservative Supreme Court and a Republican-controlled Congress.

Fraudulent or suppressive election administration or vote counting by norm- or law-breaking officials.

Vigilante action that prevents voting, interferes with ballot counting or interrupts the legitimate transfer of power.

These mechanisms are not outside the realm of possibility:

Recent reporting from Robert Costa and Bob Woodward revealed that the previous administration had a plan, hatched by the prominent conservative lawyer John Eastman, for former Vice President Pence to throw out the electoral votes of key swing states on the basis that they had competing slates of electors. Next time around, “with the right pieces in place, Trump could succeed,” the Times columnist Jamelle Bouie writes. “All he needs is a rival slate of electoral votes from contested states, state officials and state legislatures willing to intervene on his behalf, a supportive Republican majority in either house of Congress, and a sufficiently pliant Supreme Court majority.”

On top of passing voting administration laws, Republicans have also recruited candidates who espouse election conspiracy theories to run for positions like secretary of state and county clerk. According to Reuters, 10 of the 15 declared Republican candidates for secretary of state in five swing states have either declared the 2020 election stolen or demanded its invalidation or investigation.

Skepticism of or hostility toward election administration is widespread among Republican voters as well, 78 percent of whom still say that President Biden did not win in November. That conviction, Reuters reported in June, has sparked a nationwide intimidation campaign against election officials and their families, who continue to face threats of hanging, firing squads, torture and bomb blasts with vanishingly little help from law enforcement. One in three election officials feel unsafe because of their job and nearly one in five listed threats to their lives as a job-related concern, according to an April survey from the Brennan Center.

“The stage is thus being set for chaos,” Robert Kagan argues in The Washington Post. Given a more strategically contested election, “Biden would find himself where other presidents have been — where Andrew Jackson was during the nullification crisis, or where Abraham Lincoln was after the South seceded — navigating without rules or precedents, making his own judgments about what constitutional powers he does and doesn’t have.”

Some experts worry about democratic backsliding even in the event of a legitimate Republican victory in 2024, Ashley Parker reports for The Washington Post. In such a scenario, Trump or a similarly anti-democratic figure might set about remaking the political and electoral system to consolidate power.

“We often think that what we should be waiting for is fascists and communists marching in the streets, but nowadays, the ways democracies often die is through legal things at the ballot box — so things that can be both legal and antidemocratic at the same time,” said Daniel Ziblatt, a Harvard political scientist. “Politicians use the letter of the law to subvert the spirit of the law.”

Experts told Parker that perhaps the most proximate example is Hungary under Viktor Orban, who returned to power in 2010 after being ousted in 2002 and over the past decade has transformed the country into a soft autocracy. Admirers of the country’s government include Tucker Carlson, who in August extolled it as a model for the United States, and the high-profile Conservative Political Action Committee, which will host its next gathering in Budapest.

Brian Klaas, a political scientist at University College London, believes there are many reasons — the threat of primary challenges against Republicans who defy “Stop the Steal” orthodoxy, gerrymandering, the influence of social media — that the Republican Party’s anti-democratic turn might not just continue but accelerate: “There are no countervailing forces. There’s nothing that rewards being a sober moderate who believes in democracy and tries to govern by consensus.”

‘The quicksand we’re already in’

Could a plan of the kind Eastman devised to manipulate the Electoral College count really have succeeded? Teri Kanefield, a lawyer, doesn’t think so. The plan was “alarming,” to be sure, but “It was never within the realm of possibility that Americans would passively tolerate” a de facto dictatorship, she writes in The Washington Post, “and at any rate, U.S. military leaders had no interest in using force to keep Trump in power, either.”

The same argument could apply to the other methods of subversion Hasen outlines. After all, if Republicans feel they must change election rules to win, might they not be said to be operating from a place of weakness rather than strength? “The only person or party that attempts a coup d’état is the one that cannot win by other means,” Jack Shafer writes in Politico. “It would only inspire a counter-coup by the majority, and maybe a counter-counter coup, and a counter-counter-counter coup.”

But some analysts worry that U.S. elections are already so undemocratic that an anti-democratic movement doesn’t need to subvert them. Consider, for example, that the Senate now heavily favors, more than it has before, a minority of voters controlling a majority of the seats, while the Electoral College has become more likely to deny victory to the winner of the popular vote. Conceivably, an Orban-like candidate without a popular mandate could win legitimately in 2024, without violence or fraud, and feel little need to transform these institutions much further.

“As things already stand today, the Republican Party can return to power in Washington without the support of the majority of the American electorate,” Osita Nwanevu writes in The New Republic. “Democrats, by contrast, had to win more than simple majorities or pluralities to gain the power they tenuously hold now — if Joe Biden had defeated Donald Trump by any less than 3.2 points in the popular vote, he would have lost outright in November. None of this is privileged information; these and other related facts have been widely disseminated in recent years by academics, analysts, and journalists who also tend to imply, nevertheless, that an undemocratic America is merely a hypothetical looming ahead of us. It isn’t. It is the quicksand we’re already in.”

What happens next? It’s up to the Democrats

The partisan biases of the Electoral College and the Senate are not easily altered, and whether they should be is a debate all its own. But at the very least, members of Congress could act to prevent the kind of explicit subversion of existing election rules that Hasen warns of:

In the House of Representatives, Democrats have passed a new voting rights act aimed at stemming the tide of restrictive new election laws from Republican state legislatures. It would reverse two Supreme Court rulings that gutted the Voting Rights Act of 1965, reviving the Justice Department’s power to bar some discriminatory election changes and easing the path to challenge others in court.

In the Senate, Amy Klobuchar of Minnesota has introduced a bill that promises to “expand protections for election administrators by extending existing prohibitions on intimidating or threatening voters to include election officials engaged in the counting of ballots, canvassing, and certifying election results.”

To guard against an Eastman-style plan to overturn the Electoral College vote, Congress could modernize the ambiguous Electoral Count Act that governs the counting procedure — far too ambiguously, Meredith McGehee and Elise Wirkus argue in The Hill.

All of these measures would require changing the Senate filibuster, but doing so is completely within Democrats’ power, as the Times columnist Ezra Klein has noted. “In that way,” he argues, “Republicans perceive the threat correctly: A country that is far closer to being truly democratic, where the unpopularity of their ideas would expose them to punishing electoral consequences.”