Home » Analysis & Comment » Opinion | Who Is That Masked Man?

Bret Stephens: Yes, I do. And possibly still enough to decide the election. I think of the undecideds as being divided into two camps. Camp 1: Voters who were leaning toward Joe Biden but were dismayed by last summer’s rioting and aren’t entirely confident that a Democratic administration would stand for law and order. Camp 2: Voters who were leaning toward Donald Trump but are lately being reminded that the president is best analogized as an unstable radioactive isotope that just happens to be in their water supply.

Gail: I like that analogy. Maybe Biden could do an ad campaign: “Say Nope To The Isotope.”

Bret: In the last week, Trump has given Camp 2 plenty to think about, particularly with his post-hospital tirade against William Barr for not indicting his political opponents, and against Mike Pompeo about releasing Hillary Clinton’s emails. I hope the attorney general and secretary of state are savoring the wages of their toadyism.

Gail: “Don’t Be A Sycophant; Reject the Elephant!”

Gail: OK, I’ll stop. Any chance something will happen that switches a lot of minds?

Bret: I think Kamala Harris mostly helped things with her performance in the vice-presidential debate. Trump actually called her a “monster” and a “Communist,” which is enough to make the ghost of Joe McCarthy blush. (Well, almost.) To most voters, I think she came across as composed, confident and decidedly unscary. The only real weakness I noticed was her refusal to answer Mike Pence’s challenge on whether a Biden administration would pack the Supreme Court. Bad idea in 1937. Bad idea for 2021, too.

Gail: You know I agree in theory, but letting the status quo go on would reward Republicans for Mitch McConnell’s totally undemocratic refusal to bring Barack Obama’s nomination of Merrick Garland up for a vote, not to mention the Republicans’ outrageous decision to push Amy Coney Barrett’s nomination through the Senate just days before the election.

Bret: We probably agree that a 6-3 split in the court is bad for its own public legitimacy, no matter whether it’s the conservative or liberal side that has the majority. But if a President Biden and Majority Leader Chuck Schumer pack the court by adding, say, four justices, then a future Republican president will inevitably add seven more justices, and on it will go. Ruth Bader Ginsburg was right when she said that nine justices was a good number.

Maybe the real goal should be to make the Supreme Court less decisive in American life. Stop legislating from the bench and let the legislature do its job.

Bret: A Democratic Senate, along with a Democratic House and a Democratic White House, will cause me gastrointestinal distress. If they try to change core institutions of American life, like packing the court and abolishing the filibuster, they might do lasting damage. On the other hand, the goal of walloping Trump and his Senate toadies is so important for the overall health of the country that I’ll just stock up on the Pepto-Bismol for a couple of years and deal with it. Maybe then the Democrats will overreach, the way they did in Obama’s first two years, and Republicans will regain their senses and exorcise their Trumpist demons.

Gail: Of course you’re not delusional — we all know that whenever the Democrats behave badly, the Republicans take that as an opportunity to reject their large, crazy right-wing sector and come up with a more reasonable plan.

Gail: Back to the Senate — any races you’re particularly interested in?

Bret: John Hickenlooper’s race against Republican incumbent Cory Gardner in Colorado is worth watching. I may be the only person not related to Hickenlooper who was enthusiastic about his presidential bid, but he’d be a good centrist Democratic voice in the Senate. The race between David Perdue and Jon Ossoff in Georgia is also close. If Ossoff wins it then it’s a safe bet Biden is going to the White House. 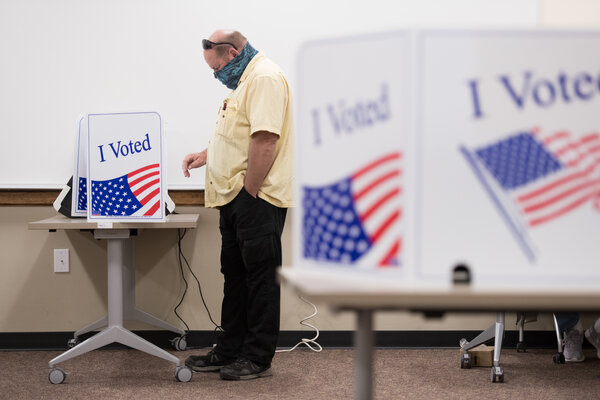 And then there’s that race in North Carolina between the G.O.P. incumbent Thom Tillis and his Democratic challenger, Cal Cunningham. Cunningham seemed to have a real edge in the race until things got, um, interesting. Let’s just say some themes rarely change in American politics, whether they involve Alexander Hamilton, Grover Cleveland, Bill Clinton and now this guy.

Gail: I would love to do a nonpartisan ad pointing out how much good stuff America has gotten from its philandering leaders.

Maybe there’s a book in it …

Bret: I have an idea for the title, which begins with the word “Presidential” and then involves a play on the word “Peccadillo.” It’s unprintable in a family newspaper, so I’ll let our clever readers figure it out.

Gail: I want the chapter on Grover Cleveland. He was always my favorite. Once, when I was doing a book on political scandals, I devoted several weeks of my life trying to figure out whether he’d really had an illegitimate child. Very rewarding.

Gail: Well, this would require an entire dinner party to get through. But one hint is that his best friend was a guy named Oscar Folsom, and the mother named her controversial baby Oscar Folsom Cleveland.

But I guess we should return to the subject of Trump, the worst president in American history. Who would qualify for the title even if he had the sexual history of a sincere monk.

Bret: Our 45th president is a less-than-sincere monk, Gail.

You know, the polls all look like they are going in the right direction. Maybe it’s my innate superstitiousness that prevents me from even wanting to think that Trump will actually go down in political flames this time around. On the other hand, a friend of mine sent me some of the polling in the U.K. before the Brexit referendum, and some of the polling suggested that Brexit would fail by a wide margin. So I just worry that we might be getting complacent about how things will turn out next month. If a week is a lifetime in politics, three weeks is at least a century.

All of which is to say: Vote!