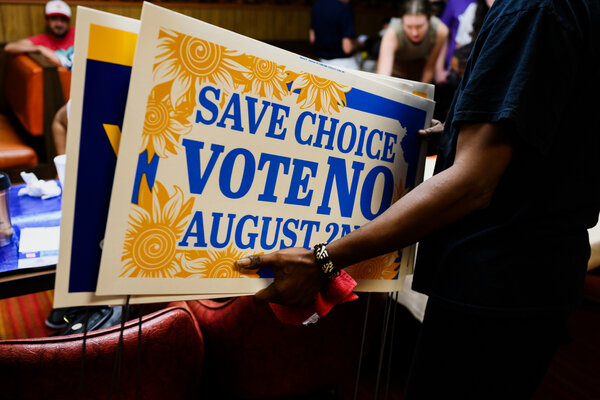 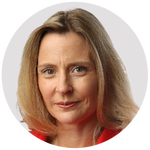 Ms. Cottle is a member of the editorial board.

KANSAS CITY, Kan. — When Sharon Brown answered the door of her modest town home on a recent Saturday, she was a little rude at first to the two young women standing before her. Yazmin Bruno-Valdez and Melanie Haas introduced themselves as volunteers with Kansans for Constitutional Freedom, a group that sounds conservative but is actually fighting to preserve abortion rights in the state. They were knocking on doors in Wyandotte County, one of the state’s bluer pockets, urging voters to oppose an amendment to the Kansas Constitution that would pave the way for tighter abortion restrictions, even a total ban. Ms. Bruno-Valdez offered a “Vote No” flyer explaining the measure, but Ms. Brown misunderstood which side the women were on. Rocking black fuzzy slippers and a hot pink robe, she made a disgusted face and waved the volunteers away. “I believe in abortion,” she said, moving to shut her door.

It took some fast talking for the volunteers to explain that they too value reproductive rights — that voting “no” on the amendment in fact means voting “yes” to preserving abortion access. With that clarified, Ms. Brown warmed to the discussion, sharing her prediction of the grim future an abortion ban would bring — “They are going to start finding dead babies everywhere: in trash bags, in trash cans, in toilets, in fields.” She assured the duo that she would turn out on Aug. 2, when the measure will be on the Kansas primary election ballot.

Confusion about the wording of the Republican-driven ballot measure — it’s delicately named Value Them Both, and simply figuring out what a “yes” or “no” vote means can be daunting — is just one of the hurdles that abortion rights supporters face in Kansas, which stands as the first big political test for abortion since the U.S. Supreme Court struck down Roe v. Wade in June.

That ruling has turbocharged the Kansas amendment fight, which grew out of a state Supreme Court decision in 2019 that the Kansas Constitution “protects a woman’s right to decide whether to continue a pregnancy.” Money from abortion rights supporters has been flowing in, much of it from out of state, and there was a sharp increase in the state’s voter registration after the fall of Roe. TV and radio ads are up and running. The mass mailings are going out. Yards bloom with signs urging “Vote Yes!” or “Vote No.” Precincts are preparing for a surge in turnout.