I’m thinking of the weight we’ve all been carrying this year, in my city and everywhere else. 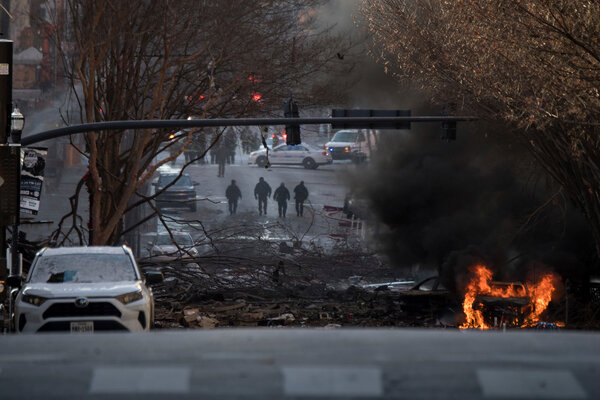 NASHVILLE — If years were musical genres, 2020 would be a country song — or maybe a blues album, or possibly gospel. It’s hard to know, in the midst of sorrow, exactly which brand of anguish is lodged in the human soul. I do know this, though: It’s been a miserable year here, a year that tore our hearts to pieces even before a bomb reduced a historic part of this city to rubble on Christmas Day.

Tornadoes ripped through Middle Tennessee last winter, killing 25 and destroying hundreds of homes and businesses. Two months later, a freak weather event called a derecho knocked out power across Nashville, in some neighborhoods for more than a week. Quarantines wrecked our tourist industry and thus much of our economy. Our public schools are still closed.

And musicians, the very heart of Music City, have been hit especially hard by the pandemic. The coronavirus has taken artists as diverse as Joe Diffie, Charley Pride and John Prine. Other musicians are wondering how they’ll pay their bills, and the people who work in the clubs, concert halls and restaurants where the musicians used to play are wondering the same thing.

And now, a bomb has gone off in the heart of our downtown.

We don’t know what caused Anthony Warner, 63, a self-employed information technology specialist and lifelong resident of Nashville’s Antioch neighborhood, to give away his car and his house and notify his clients that he was retiring. We may never know why he drove his R.V. downtown early Christmas morning, parked it near an AT&T transmission facility on Second Avenue North and then detonated the bomb it carried. All we know for sure is that Mr. Warner died in the blast.

The investigation is continuing, but the effects of the bombing were immediate: devastation on Second Avenue and significant damage for blocks around, canceled flights, internet and phone outages, including many 911 systems in the region, and yet another hit to Nashville’s economy.

It appears that Mr. Warner acted alone. Because there is no evidence, at least so far, that the bombing was intended to further the aims of an ideology, officials have resisted calling it an act of domestic terrorism.

Progressives are arguing — fairly, I think — that only white bombers get the benefit of this kind of doubt, while conspiracy theorists insist there’s a connection between the Nashville bombing and imagined attempts to steal next week’s runoff elections in Georgia. If there’s anything more 2020 than an explosion at the end of an already shattering year, it’s surely a fight about it on Twitter.

The one saving grace of this particular tragedy is that Mr. Warner seems to have tried to protect human life from the blast. Second Avenue is normally a lively center of business and tourism, but Mr. Warner didn’t blow it up at a time of maximum occupancy. Instead, he chose early Christmas morning, a time when the fewest people would be nearby.

Most crucially, he issued a warning. Before the R.V. blew up, it broadcast a recorded voice stating that the vehicle carried a bomb. “This area must be evacuated now,” it repeated. “If you can hear this message, evacuate now.” According to witnesses, the warnings played for approximately half an hour before switching to a 15-minute countdown. In between warnings, the vehicle played a recording of “Downtown,” Petula Clark’s 1964 hit song.

The evacuation notices gave the police time to wake nearby residents and get them to safety. Later that day, Mayor John Cooper identified the police — Officers Brenna Hosey, Tyler Luellen, Michael Sipos, Amanda Topping and James Wells, and Sgt. Timothy Miller — and expressed his gratitude for the risks they took to save others.

Thanks to their heroic efforts, Mr. Warner himself is the only one who died in the explosion, and I have no doubt that in time the city itself will recover. As my friend Steve Haruch notes in his new book, “Greetings From New Nashville,” that’s just who we are. After any tragedy, he writes, Nashville will always “quickly and quietly set about doing what it does: taking care of its own.”

But Mr. Haruch also points out that this isn’t only who we are. We are also a community that is growing in ways that often make it unrecognizable to us, a place where too many people who have lived here all their lives feel abandoned. “Nashville and its glittering progress has begun to feel increasingly closed off to an ever larger segment of its less affluent citizenry,” Mr. Haruch writes.

It’s not just the less affluent citizens. I keep coming back to that Petula Clark song and its ironic promises:

When you’re alone and life is making you lonely
You can always go downtown
When you’ve got worries, all the noise and the hurry
Seems to help, I know, downtown

The stretch of Second Avenue where Mr. Warner parked his R.V. is both a part of and apart from Nashville’s tourist scene. Once known as Market Street, it was listed on the National Register of Historic Places in 1972. Today its historic buildings house a Hooters and a Wildhorse Saloon.

Every longtime Nashvillian I know looks at what our downtown has become — the packed bars decked out in Nashvegas neon, the “transpotainment” industry’s hot tubs on the backs of tractor-trailers — and wonders how on earth our beautiful city ever became this garish, alien place.

In that sense, the bomb that went off on Christmas morning feels like a visible manifestation of a quiet alienation that has been growing here for more than two decades. An alienation that reached its nadir this year during a pandemic that saw locals dutifully staying home but downtown bar owners fighting quarantine restrictions.

I don’t claim to understand the heart of the Christmas Day bomber, and I am grieving as much as anyone over what he did to our city. But I am also thinking of the weight we’ve all carried this hard year, in Nashville and everywhere. There are times when it feels too heavy, no matter how resilient we are determined to be.

Pressed into service unrelentingly, resilience can develop into a carapace that grows too hard, a scab that closes off a festering desperation. And if any good is to emerge from all this grief, it will only be because we have learned not to ignore the suffering that came first. If we finally address the grief that came before the grief.

Margaret Renkl (@MargaretRenkl) is a contributing opinion writer who covers flora, fauna, politics and culture in the American South. She is the author of the book “Late Migrations: A Natural History of Love and Loss.”