It may take a terrorist attack, a war or some other national emergency, but America will one day thank Justice Neil Gorsuch for his stirring words last week in Roman Catholic Diocese of Brooklyn v. Cuomo. “Government,” he wrote in a concurrence to the 5-4 majority opinion, “is not free to disregard the First Amendment in times of crisis.”

The case arises from restrictions Andrew Cuomo imposed by executive order in October that sharply limit attendance at houses of worship in zones designated by the New York governor as pandemic hot spots. In so-called orange zones, attendance is capped at 25 people; in red zones, at 10. That goes for churches and synagogues that can seat hundreds and that were already limiting attendance, barring singing, practicing social distancing and taking other precautions.

The Catholic diocese, along with Agudath Israel of America and affiliated entities, sued, arguing the restrictions amounted to religious discrimination. The crux of the matter was that businesses in orange and red zones, ranging from liquor stores to bike shops to acupuncturists, were subject to no such restrictions because the governor had deemed them “essential.”

“So, at least according to the governor, it may be unsafe to go to church, but it is always fine to pick up another bottle of wine, shop for a new bike or spend the afternoon exploring your distal points and meridians,” Gorsuch wrote. “Who knew public health would so perfectly align with secular convenience?”

The Supreme Court’s decision only temporarily prevents Cuomo from enforcing his executive order, pending a decision by a U.S. Court of Appeals. But it marks an important departure from similar cases earlier this year, when the court deferred to the judgment of governors for how best to handle the pandemic. It also rejects the view (argued by New York State) that Cuomo treats houses of worship in red zones more favorably than he does, say, movie theaters. The right to the free exercise of religion, even if subject to regulation, deserves greater deference than the right to attend your local cineplex. 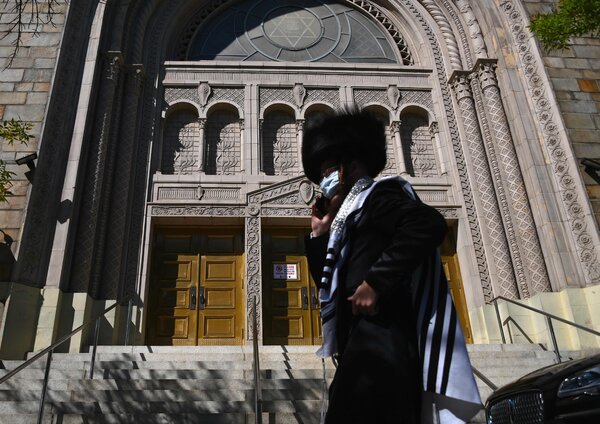 What changed? Most obviously, the death of Ruth Bader Ginsburg and her replacement by Amy Coney Barrett.

But other factors clearly weighed on Gorsuch and the four other conservative justices who voted with him. (Chief Justice John Roberts dissented.) One was time. It was one thing for courts to defer to executive authority in the early days of the crisis. But how long can governors override fundamental rights? “Even if the Constitution has taken a holiday during this pandemic, it cannot become a sabbatical,” Gorsuch wrote.

Another was the game of Hot Zone Whac-a-Mole that Cuomo tried to play with the court as the case was working its way through the legal system, by switching the affected areas’ designations back to “yellow.” That was enough to persuade Roberts and other dissenters that they could leave well enough alone, at least for now. But, as Gorsuch noted, one also has to be modest about judicial modesty: “We may not shelter in place when the Constitution is under attack. Things never go well when we do.”

That’s a thought that ought to inspire everyone, liberals most of all. Imagine slightly different circumstances, in which, say, a conservative governor of a red state had used pandemic concerns last summer to impose draconian limits on public protests, and that he had done so using color-coded maps that focused on denser urban areas and that seemed to apply most restrictively to predominantly Black neighborhoods.

Now imagine this governor had, at the same time, loosened restrictions on large gatherings such as motorcycle rallies, business conventions and football games — on the grounds that these were essential to the economic well-being of the state. Any objections?

The point here isn’t that the interests of public safety and respect for executive authority must always and fully give way to the assertion of constitutional rights. They shouldn’t and don’t. Nor is the point that the behavior of religious communities during the pandemic has been beyond reproach, or beyond the reach of justifiable legal sanction. It hasn’t.

The point is there are no second-class rights — and the right to the free exercise of religion is every bit as important to the Constitution as the right to assemble peaceably, petition government for redress and speak and publish freely. That goes in circumstances both ordinary and extraordinary. As Justice Samuel Alito put it in a speech this month that caused some gnashing of teeth: “All sorts of things can be called an emergency or disaster of major proportions. Simply slapping on that label cannot provide the ground for abrogating our most fundamental rights.”

There is a perennial danger that rights denied or abridged during one emergency for one class of people will ultimately be denied during another emergency for another class. The reverse is also true. The victory for conservatives in last week’s ruling will be a victory for liberals somewhere down the road. The precedent set by the ruling, and the power of Gorsuch’s concurrence, will make the victory sweeter.