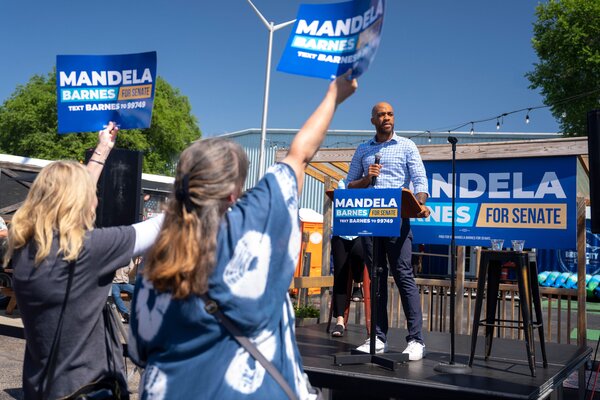 Mr. Shafer is a journalist based in Milwaukee. He writes a newsletter about Wisconsin politics.

MILWAUKEE — Millennials came of age at a time of crisis. They are the first generation in American history positioned to be worse off than their parents, their economic trajectory forever altered by the economic meltdown of the late 2000s, as the ladders to the middle class were pulled up or broken by the crushing burden of student debt, the decline of unions and skyrocketing health care and housing costs, and as rapid technological changes proved more calamitous than democratizing.

Mandela Barnes — who won the Democratic Senate primary in Wisconsin on Tuesday night — understands the challenges this era has thrust upon millennials better than most in his position. Serving under Tony Evers as the lieutenant governor of the state, Mr. Barnes is just 35 years old, and if elected could be only the second senator born in the 1980s.

In many respects, he embodies both the flaws and the promise of his generation. Running to be the first Black man to represent a Rust Belt state in the Senate since Roland Burris, he is talented, charismatic and passionate, a fresh face entering the national scene in a party still dominated by an aging political establishment. But like many other millennial politicians now considering higher office, his path was a more progressive one. Mr. Barnes came up as a young State Assembly representative on Milwaukee’s liberal North Side. This fall, he will face challenging questions about his record, like his position on bail reform and the Evers administration’s response to the unrest in Kenosha.

But he has the tools he needs to overcome them — he can win this race in part because he has endeared himself to mainstream Democrats as a member of the Evers administration, and because he may be able to tap into a new pool of Wisconsin voters.

The fault lines in American politics are sometimes generational as well as ideological, and that is certainly part of the story unfolding in the midterm elections in Wisconsin, where Senator Ron Johnson, the incumbent Republican — a vulnerable one — faces a Democrat roughly half his age.