Home » Analysis & Comment » Opinion | Liz Cheney Wants Her Party Back. The Feeling Is Not Mutual. 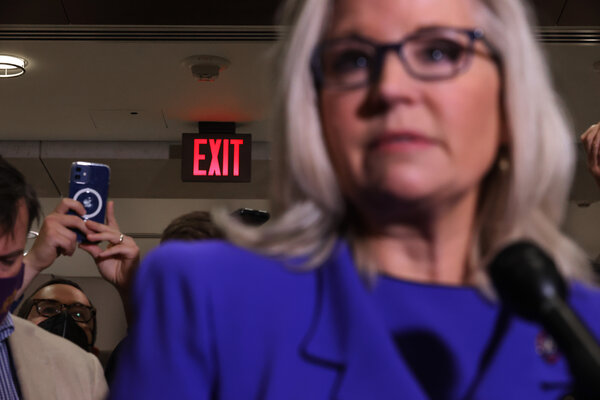 By Gail Collins and Bret Stephens

Ms. Collins and Mr. Stephens are Opinion columnists. They converse every week.

Gail Collins: Well Bret, I feel obliged to start us off with Liz Cheney. Kicked out of Republican leadership, but not giving up on her Trump-lost-the-election message, and still attached to a party that seems doomed to never, ever get its act together.

Bret: I’ve always liked her. She was one of the few elected Republicans willing to criticize Trump openly during his presidency. Our foreign policy views are hawkishly in tune. And she understands that the U.S. can’t hold itself up as some kind of paragon of liberal democracy when one party is in thrall to a mendacious Mussolini manqué whose only saving grace is that he lacked the guile of a Vladimir Putin to competently steal the election.

Gail: Mendacious Mussolini manqué is pretty good. At least for us elders. But go on.

Bret: What the vote says about the Reprobate-tarian Party — as it should now be called — is another story. What do you think?

Gail: Whatever the R.P. is, it’s all about Donald Trump. Being for or against. And most of those folks seem to be for, even if some of them, like the evangelical leader Franklin Graham, are thinking that come 2024 Trump might just be too, um, old.

So I’m figuring we’re careening toward an election next year that’ll be a remake of the last one. Just sorta worried that the people who lost will feel more energized than the people who won. Of course then we’ll slog onto 2024 and the real test of the system. But I don’t want to spend most of the interval under the thumb of a Republican Congress.

Bret: One of the interesting details in the Cheney saga is that while Trump still has high favorables among Republican voters, he also polls very, very badly in battleground districts. The National Republican Congressional Committee tried to suppress that fact at a recent G.O.P. retreat, but it is one of the reasons Cheney keeps insisting that her party needed to distance itself from the former president.

Gail: Very interesting, especially for Democrats who are used to the idea that in his party, Trump is all-powerful.

Bret: It suggests a lot of Republican members would rather keep their seats safe from a primary challenge by staying in Trump’s good graces, even if their devotion to him wrecks their chances of gaining a majority in the House or — as we saw with the twin G.O.P. Senate losses in Georgia — the Senate.

Gail: So the obvious answer is to run as a Trump supporter until the primary season is over, then announce: “Oh my gosh, I’ve been on a listening tour and have discovered our former president can be extremely … divisive. Change is needed!”

Bret: I’m counting on Elise Stefanik, the moral acrobat of the Republican House caucus, to show the way.

Gail: But the bottom line, I hope, is that Trump is ebbing a bit more every week, political power-wise.

Bret: Which should make you breathe a little easier. Speaking of which, how do you feel about being able to go about maskless for a change?

Gail: Can’t say I’ve really experienced much of it. My apartment building operators sent out a notice demanding that we stay covered in the public spaces. So even if I’m going to walk my dog in the middle of the night, I need a mask. Restaurants still want you to wear a mask if you’re headed for the ladies’ room.

Bret: Funny how a remark that, pre-Covid, would have sounded either weird or creepy now seems completely normal.