HATBORO, Pa. — I’d almost lost my capacity to be shocked by drug overdose. At 28, I’m of Generation Opioid. During high school, prescription pills were as easy to abuse as a learner’s permit. Our reunions take place coffin-side and often.

But shock is what I felt when I got the call, three days before Thanksgiving, that David was dead. He was found slumped against a tree in the neighborhood where we grew up, where both of our mothers live still. Technically, David was my earliest friend. We called each other cousins because our mothers are like sisters — I refer to his as my Aunt Tammy. Like many people in this suburb just north of Philadelphia, he became saddled with addiction when we were teenagers, then spent his short adulthood fighting it

Clean for almost two years, with a good job as a lead install technician at an HVAC company, married and with two little sons, he seemed to be winning the fight. A few months before his death, I had come home to write about what it was like to grow up in a society awash in prescription drugs. I thought I had enough distance to look back and freeze-frame the blur of our high school years, but knew I couldn’t do it justice without talking to David. He had more clarity about this catastrophe than anyone. The article got published and then he died. Now all I have left of him, apart from some ashes, are the pages of notes in which he talked to me so recently about the very thing that would soon kill him.

“Everybody was dabbling in high school,” he reminded me in that conversation. “It was fun, readily available. It was expensive but everybody would put their money together and it became a social thing. But by the end it was an isolated addiction. You cross the line, and you never know when or where it is. It’s cunning and it’s baffling but once you’re over that line, it’s a battle between you and you. You have to defeat yourself if you want to get out of it and not die. It’s almost good versus evil in your brain.”

In a period of sobriety, David got married; four years ago, his first son was born. More than anything else, it was fatherhood that compelled him to get and stay sober. But there were slip-ups. “It’s ongoing and at any second I can go back,” he said.

After David’s body was discovered, Aunt Tammy’s house became packed with mourners. Five of the mothers standing around the tiny kitchen that night had lost a child this way. Nobody was much concerned about Covid distancing. That crisis feels intangible, compared with the durable and familiar opioid crisis. 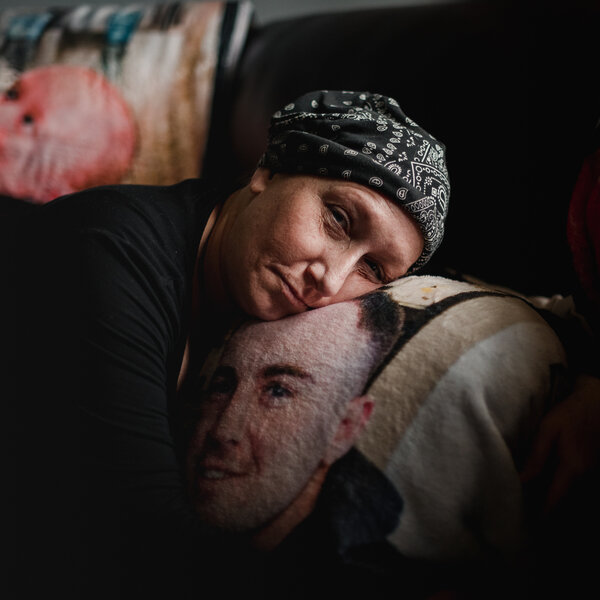 “I can’t tell you how many funerals I’ve been to since Carly died,” said one of the mothers, Renee Whyte. “It’s hideous.”

Carly, her daughter, went to school with me and David. She was smart and artistic, a total cool girl. She died in 2013. “Losing your child, you could have a thousand people around you and feel so alone,” Ms. Whyte said. “It’s not because people don’t care. It’s because only you know what your child meant to you.”

One of the hardest parts, she said, is when someone asks: How many kids do you have?

“And you don’t know how to answer.”

By the time I graduated from high school, 10 years ago, opiates were everywhere. Percocet and Vicodin became a regular presence at parties. Mixed with booze and some weed, pills were a new way to kick a Saturday night up a notch. Teenagers eager to get their paws on something stronger had no trouble finding OxyContin. Those pills were designed to mete out pain relief over 12 hours, but they could be crushed and snorted for immediate zombification. Addiction came quickly after. In 2010, when I was in 11th grade, Purdue Pharma tweaked OxyContin to make it uncrushable. But rather than deter my friends, this pushed classmates already keen for the high straight to heroin — why bother with a pesky pill that takes its time when a “stamp bag” of the real stuff could be had for cheap? The overdoses ramped up.

David named his first son DJ, after his best friend, DJ McGettigan, another classmate of ours who overdosed. “It’s coming up on five years since DJ passed,” said his mother, Laurie McGettigan. “So my grief is at a different point than Tammy’s. In the addiction world, I always talk to her about how you can’t cure this, you can’t control this, and you didn’t cause this. I just find ways to honor who I knew DJ really was, not who the world saw. That’s probably the saddest part for me.”

Ms. McGettigan now volunteers with the nonprofit Shatterproof, working to reverse the stigma of addiction. “The stigma still exists in tons of little ways,” she said. “Even when someone dies, people want to talk about how, and then when they find out they don’t want to talk about it further. There’s a shame attached.”

In some ways, though, the stigma has been blown apart here because the whispering has turned into one perpetual scream. As David himself said to me: “It’s in our face every day, whether you go to 7-Eleven or Walmart, driving down the road you see people dipping out” — dozing off. “You see it no matter where you’re at.”

Two weeks before David died, another old friend of mine felt himself start to spiral. He tried to get help from the local drug clinic, but was turned away because all the beds were full. He died.

Addiction woes threaten to swallow families whole. Parents learn to speak the language of the netherworld in which their children walk. Stamp bags. Speedballs. Suboxone. Vivitrol. Narcan. Fentanyl. Perc 30s. Blues, bars, 40s and 80s — the lexicon of the unlucky.

Some are left to grapple with the living, breathing wreckage of their worst moment: how to live in the same town with the neighborhood kid you’ve known since he was a toddler but who sold the lethal dose to your child. Or the one who helped him shoot up and then left him for dead. There are no answers. “You can be the best person in the world and this stuff will make you do something so screwed up,” David had said to me.

“Nobody wants their child’s life defined in one moment of a bad decision,” Ms. Whyte said. “My daughter was more than one night, more than an overdose. She was defined by 23 years of greatness to my family.”

While we planned David’s funeral, Christmas lights began to blink awake throughout the neighborhood, and new reporting in The Times that week cast light on the nature of the crisis that killed him. McKinsey & Company, the prestigious consulting firm that helped Purdue Pharma “turbocharge” opiate sales, had proposed awarding Purdue’s distributors with a rebate for every OxyContin overdose, as a way to maintain sales. Earlier reports revealed that McKinsey had strategized how “to counter the emotional messages from mothers with teenagers that overdosed.”

The heinous documents confirmed that so much about this crisis was manufactured. There is no amount of money the odious Sackler family can throw around to counter the emotion here. Especially because these days, things are worse than ever, since heroin has been largely edged out by the far more lethal fentanyl. It’s difficult to even find a block in North Philadelphia that sells just heroin anymore; even cocaine is being cut with fentanyl.

The drug has closed the door to many hoping for a path back to their lives. Of fentanyl, David presciently told me, before the drug turned up on his own autopsy report, “It’s much harder to get off of, because it’s so much stronger, and much easier to overdose on, too.”

The pastor who presided over David’s funeral was a recovering addict. He spoke during the service of his own rock bottom: Breaking open his children’s piggy banks, scrounging for quarters and driving to “the Badlands” — Philly-speak for the neighborhood of Kensington and its open-air drug markets — for 10 bucks’ worth of dope. In pews around me, friends and family nodded knowingly. Some of these mothers have spent untold hours scouring those blocks, hoping their child isn’t one of the bodies face down in the street. Sometimes they do find their kid, but can’t convince him or her to get in the car. All they can really do is give them a warm coat, a peanut butter and jelly sandwich and a hug.

What doesn’t shock me is that high school students are still falling down this well the same way we did 10 years ago. The nature of a teenager — that heady and sometimes lethal mix of feeling invincible, curious, bored and reckless — is immutable. As long as drugs are everywhere, kids will do them.

When we got home from the funeral, my younger sister flipped her phone back on, looked down at it and began to bawl. An avalanche of text messages told how her friend had overdosed on OxyContin that same day. He was 19. She turned back around and got in the car, headed to wherever mourners were gathering this time.