Home » Analysis & Comment » Opinion | How Will the Pandemic Affect the Presidential Race?

Readers discuss President Trump’s rising approval numbers, how Joe Biden is “sidelined” and whether Gov. Andrew Cuomo should be drafted as the Democratic nominee. 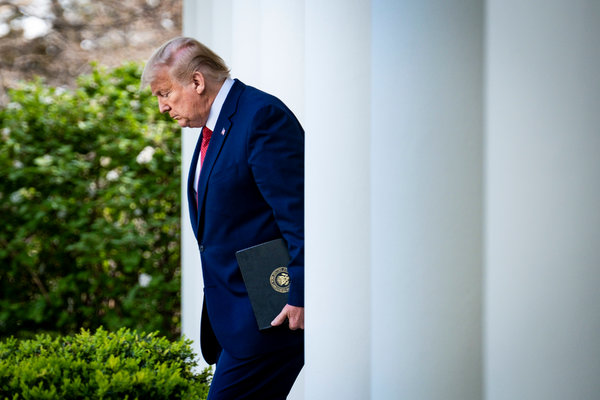 Re “Trump Is Hurting His Own Re-election Chances” (column, March 30):

Shortly after David Leonhardt’s insightful column first appeared online, President Trump made a tardy but inevitable pivot, appearing to finally confront the reality of the coronavirus pandemic. The election now depends largely on perceptions and how many voters see the federal response as “too little, too late” or “maybe enough but way too late.”

Either the electorate will understand the price in lives that Americans will pay for a series of official misrepresentations and astoundingly poor decisions, or the electorate will be sufficiently soothed by presidential photo ops with hospital ships, ventilators and visits to wards treating the deathly ill.

There won’t be a lot of presidential trips to see the refrigerator trucks full of bodies. The human toll will be horrendous. If past is prologue, it will be a toll many times worse than the president would now have us believe.

I wanted to believe David Leonhardt’s assurance that “Trump Is Hurting His Own Re-election Chances.” Here’s why I can’t.

The media continues to ignore the fact that “any publicity is good publicity as long as they spell your name right.” After initially handing the job of dealing with the coronavirus to Mike Pence, President Trump has kept himself in the spotlight and the headlines every day.

Bad times will count against Mr. Trump only if people hold him responsible for them. He’s making sure that they see the coronavirus as caused by the Chinese, so he can become the wartime leader against a vicious and unpredictable foe.

And the polls during the 2016 election showed that 40 percent of voters never considered voting for anyone else. They were undisturbed by anything he said or did. They are still there, and it only takes a few more to make him the winner in 2020.

President Trump’s approval numbers are rising as he is on TV every day surrounded by some of this nation’s most impressive physicians — and even sounding at times a tad more presidential. Of course, he can’t help going off script, making bizarre claims when irked by a reporter’s questions.

More important, Joe Biden is sidelined. Whatever traction he was gaining during the primaries is now lost. Maybe he can get it back if things return to normal during the convention season over the summer, but, ironically, returning to normal during the summer will help Mr. Trump by allowing him to try to claim that he is the “savior” of mankind. Good grief!

Gov. Andrew Cuomo often says he works for the people of New York. In fact, as Ms. Dowd’s column affirms, for weeks he’s been working for all Americans when it comes to informing us and strengthening our morale. A lot of people (including me) rely on his daily briefings almost as a dose of therapy. Straight talk, clear talk, empathetic, thoughtful and heartening — these briefings are providing, during this crisis, everything a leader should.

New York is a lucky state, and this country should be so lucky. With regard to the November election, might it not be time now to at least investigate the possibility of a draft?

It’s sad that at a moment of national action against a common enemy, the coronavirus epidemic, our president in signing the $2 trillion aid bill at the White House omitted inviting a single Democrat!

Must everything this president touches be seen as a battle against the other party, instead of an act of unity that our country so badly now needs?

President Trump shamelessly never misses an opportunity to promote himself, crisis or not. The card I received in the mail is labeled “President Trump’s Coronavirus Guidelines for America.” It would have been far more appropriate to label it as “C.D.C. Guidelines,” both for accuracy and credibility.