Kater al-Nada scanned the other fourth graders on the theater steps in the Bible Lands Museum Jerusalem. Spotting her newfound friend Shachar, her face beamed.

Shachar, who knew five words of Arabic but not those uttered by Kater al-Nada, nodded. Shachar dropped into the seat. They exchanged smiles.

Two exuberant 10-year-old girls choosing to sit next to each other shouldn’t be a big deal. But Kater al-Nada is a Muslim Palestinian whose family lives under Israeli governance in the Beit Hanina area of East Jerusalem, and Shachar is an Orthodox Jewish Israeli who lives in West Jerusalem. Although eight miles separates their neighborhoods, they’re light-years away geopolitically. They don’t share a religion. Nor a language. Nor a nationality. They live in worlds that think of each other primarily in derogatory terms and hold deep grievances.

Neither Kater al-Nada nor Shachar had ever before had the opportunity to meet someone her age from the other side.

They were participating in The Image of Abraham, a program that brings together Jewish Israeli and Palestinian 10-year-olds for four weekly visits to the Bible Lands Museum Jerusalem. A party at the end of the program includes parents. Kater al-Nada joined her classmates from Beit Hanina Coeducational Elementary School; Shachar joined her classmates from Efrata, a public elementary school in the Israel National-Religious school system. Both schools are part of Israel’s Education Ministry. 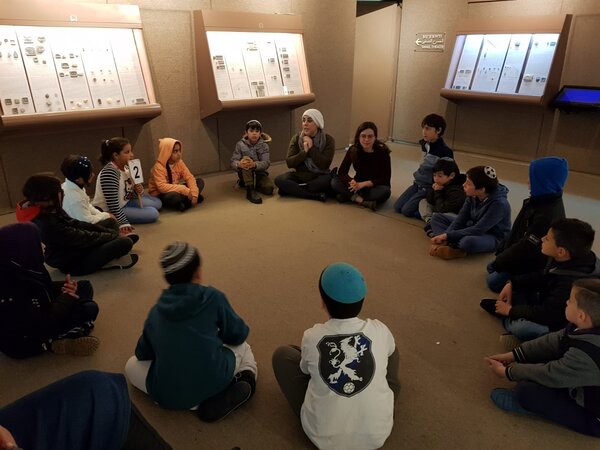 In The Image of Abraham, the act of reaching-across-the-divide is subtle, even secondary. “Peace” and “coexistence” aren’t mentioned. Learning is threaded through art, history, religion and play time. This entry point is less charged than the Israeli-Palestinian conflict, as the museum’s Arabic Department director, Tareq Samman, has said. And 10-year-olds seem to be mature enough in terms of social skills and sufficiently receptive to differences.

The program has played out amid the grievances and distrust still held by each side of the Israeli-Palestinian conflict. Since the program’s inception in 1998, about 6,300 Jewish Israeli and Palestinian students from greater Jerusalem have had the Image of Abraham experience, in which they are assigned to commingled groups led by a Jewish Israeli and a Palestinian guide in both Hebrew and Arabic.

But numbers can be a misleading metric for the program’s success. In the words of Amanda Weiss, a director emeritus of the museum, the program “has been impacted by the political events around us — always — but remarkably, it generally strengthened the commitment of the parents and school body to participate when things were particularly stressful around us.”

During the Second Intifada from 2000 to 2004, she continued, “every time the children came to the museum it was in the shadow of an attack on one side or the other. There was always some horrific, terrifying incident that hit close to home. We were glued to our news stations to hear who had been killed the day before. It was gruesome.” Nevertheless, Palestinian and Israeli children showed up for the program on assigned mornings and congregated with their teachers in the museum lobby, raring to go.

Today, even on the calmest days, Palestinian children often tell emotional stories of crossing the checkpoint on the bus ride in from East Jerusalem to West Jerusalem. But once inside the museum, they are free to traverse Ancient Egypt, Mesopotamia and Canaan like local terrain. They collaborate on art projects and play icebreaker games that highlight teamwork. The language gap is overcome with hand gestures, translation and homemade Arabic-and-Hebrew glossaries. According to a Bible Lands Museum survey of 300 program participants from 2015 to 2017, 95 percent said they’d developed warm feelings about at least one child from the other side; 83 percent said they had fun together, and 72 percent said they learned new information.

Soon the children open up beyond the limitations of language and culture. During playtime, they race on the lawn. When Shachar, Kater al-Nada and their friends play Chinese jump rope, the Palestinians and Israelis are indistinguishable: the same long hair, the same beat. Who is in the center and who on the periphery? In that steady elastic rope, it is ever-shifting. Everyone is equal.

Also equalizing is singing — in Arabic, Hebrew and English. Participants learn the reggae singer Matisyahu’s “One Day,” an anthem of hope for an end to violence. At the closing party, they belt out a dream and a prayer: “There’ll be no more wars, and our children will play.”

The Image of Abraham has endured the Second Intifada, bus bombings, terrorist attacks, the killing of relatives. It has also endured military curfews and incursions, as well as targeted killings with civilian casualties. Palestinians have been harassed for attending. Jabel Mukaber Elementary School participated from 2002 to 2008, when a school administrator was threatened and withdrew. In recent years, the program has navigated accusations of “tatbiyh” — “normalization” of Israel’s occupation of the West Bank. Still, The Image of Abraham has prevailed. “We counterbalance fear and prejudice so children can discover that the other side is just like them,” Ms. Weiss said.

When Efrata registered to participate in 2015, it was the first time a National-Religious school did so. But for its principal, Gila Sadon, it was natural. “My students,” she said, “should know Palestinian Arabs as individuals, with dreams, pain, lives like ours.”

Samah Uthman, principal of Beit Hanina Coeducational Elementary School, agreed. “My students encounter only Israeli soldiers, and they’re threatening and scary,” she said. At the museum, students get to meet their peers.” How does Ms. Uthman buck anti-normalization pressure? “It isn’t easy,” she said. “But I believe that firsthand experience alleviates some fear of Jews.”

Dr. Nava Sonnenschein, a former director of Neve Shalom Wahat al-Salam’s School for Peace, questioned whether participants in people-to-people programs like The Image of Abraham generalize from the “micro”— meeting individuals — to the “macro” of dismantling stereotypes. “If you don’t directly address the Israeli-Palestinian conflict,” she said, “even with children, you can’t inspire meaningful change.”

For me, a person-to-person experience did spark a far-reaching shift. I’m a religiously observant American-Israeli Jewish woman. One of my closest friends, Ibtisam Erekat, is a Palestinian Muslim woman who lives on the other side of the Separation Barrier. We met through an Israeli-Palestinian breast cancer support group. She’s a natural part of my life, through good times and bad. While I supported peace beforehand, having a Palestinian friend who is like a sister propelled me to learn more about Palestinian society and educate myself about Israeli-Palestinian dialogue. Our closeness also inspired my greater involvement in peace movements and made it difficult to forget the disparity in life experiences between Israelis and Palestinians.

Ruth Ebenstein is an American-Israeli journalist, historian, public speaker and peace activist. She is writing a memoir about an Israeli-Palestinian friendship begun in a breast cancer support group.

To receive email alerts for Fixes columns, sign up here.