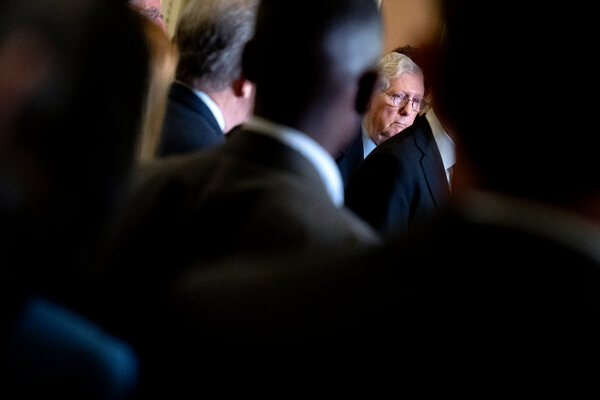 Mr. Lofgren served for 28 years as a Republican staff member for the House and Senate Budget Committees and has written extensively about politics and the Constitution.

During my three decades as a congressional staff member, one of the most tiresome rituals was the periodic tussle between parties on the vote to raise the debt ceiling. The worst offenders were members of the Republican Party — at the time, my party — forever moralizing and invoking the piling of debt on the backs of our children.

The debt-ceiling-vote ritual has become even more tiresome — and dangerous. Republicans like Mitch McConnell, the Senate minority leader, no longer invoke high principle. Mr. McConnell said that the world’s largest economy and global reserve currency are “a hostage worth ransoming.” With a potential default looming, he has been blocking a vote to raise the limit. Yesterday, he said that he will allow an increase in the debt ceiling until December, which would merely set up the nation for a further debt melodrama and another rattling of markets.

No free, constitutional government should provide legal means for its own sabotage. The 14th Amendment offers a way out. It is not only a directive to Congress that it must not vote to default; it also enjoins every officer of the government, including the president, to recognize the sanctity of the nation’s full faith and credit and to take care that it be maintained.

If the debt-limit dysfunction continues, President Biden must direct the Treasury secretary to take the steps required to prevent default.

It’s time to end the charade of the debt-limit vote and stop legislative terrorism on it for all time.